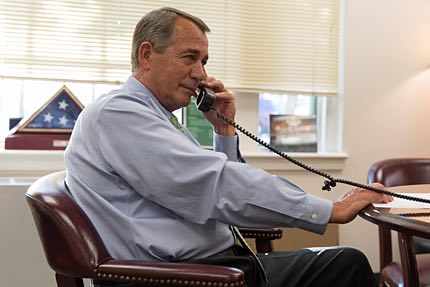 Today, U.S. House Speaker John Boehner (R-OH) told the Washington Blade that he does not anticipate that House Republicans will take a position on the marriage cases in front of the U.S. Supreme Court. Boehner said, “I don’t expect that we’re going to weigh in on this. The court will make its decision and that’s why they’re there, to be the highest court in the land.”

It’s not news the Republican Party is changing both its tune and position on the freedom to marry. A majority of Republicans under age 45 support gay people marrying. GOP pollsters have declared the debate over. And instead of loudly beating the anti-gay drum, high profile leaders like Mitch McConnell and others are staying silent on the question, even during their tight midterm races last fall. Many prospective GOP candidates who are thinking about running for president are either calling for a big-tent respect for diverse views on marriage (Jeb Bush and Rand Paul) or are acknowledging the issue as “the law of the land” (Scott Walker).

The Resolution ends with, be it “Resolved, that all Republican candidates for President of the United States in 2016 shall refrain from any anti-gay rhetoric.”

“It’s time for the party of Lincoln to treat all Americans with respect and dignity,” said McCain. “If the Republican Party is ever going to attract younger voters, our candidates for president need to stop their nasty attacks and move on to issues that will unite us as a party and a country.”