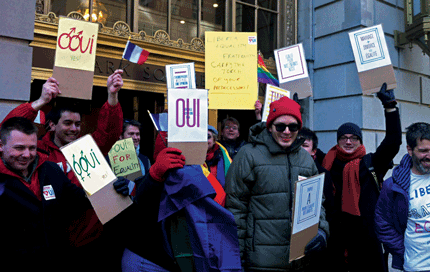 Local members of the Boston LGBT community, Boston Pride board members, Français du Monde, Gay & Lesbian Advocates & Defenders (GLAD) along with members of the French community were out to support marriage equality in front of the office of the Consulate General of France in downtown Boston.
Photo: Lauren Walleser

Local members of the Boston LGBT community, Boston Pride board members, Français du Monde, Gay &
Lesbian Advocates & Defenders (GLAD) along with members of the French community were out to support
marriage equality in front of the office of the Consulate General of France in downtown Boston.
Photo: Lauren Walleser

Local LGBT and French organizations recently braved the bitter cold to show their support for equality in France. The French government and parliament are currently working on a bill which would legalize same-sex marriage and allow same-sex couples to adopt children. As a response to protests organizations in France have held in opposition to the pending legislation, supporters of the bill gathered world-wide on January 27 to make their voices loud and clear.

Sylvain Bruni, a board member at Français du Monde and a French citizen, said that while he and other groups held the rally in Boston, similar rallies were held in Paris, Quebec, Montreal, Ottawa, Rio de Janeiro, Buenos Aires, Rome, Madrid, and London.

“We have a lot of French expatriates in the United States as well, a lot of bi-national couples, French American, and this law is going to allow also the recognition of those bi-national couples that got married here, for example in Massachusetts,” said Bruni. “Those couples right now have zero recognition in France. If they have kids here, their kids basically have no status in France. They don’t exist.”

“Boston has the history of being at the forefront of that type of fight,” he said.

This was a sentiment that was repeated throughout the afternoon―Massachusetts has a special role in supporting equality efforts around the world, particularly marriage equality, because of its historic lead in the U.S. on the issue.

“Obviously, being the first state in our country to support gay marriage, it’s kind of important for us to stand up for every other state and country across our world to help equality, so we’re very proud to support this effort to make sure that our fellow Frenchmen get what is deserved, full equality in all aspects,” said Linda DeMarco, President of the Boston Pride Committee. “This is really for mankind, and the more we can get equality across the world the better mankind will be.”

Bruni shared the idea that support for France may be a two-way street which would lead the U.S. towards federal recognition of same-sex marriage.

“The president has said clearly that he supports equality and marriage for all,” he said. “Now is the time to act. I know there are lots of things on his plate and on the administration’s plate, but the more countries that actually go forward and allow same-sex couples to marry, to adopt, I think the more the pressure is going to be for the United States to follow suit as well.”

Rally attendee Daniel Carroll, who worked as an intern for Boston Pride last fall, explained why there may be a rise in the anti-equality movement in European countries like France and Spain.

“I’m not exactly sure of the concentration of religiosity of France or Spain vis-à-vis the United States, but I would guess that just about any place you would go, in any country, even here in progressive Massachusetts, you have resistance to the fight for marriage equality or adoption rights or other aspects attendant to the general LGBT movement,” Carroll said.

Carisa Cunningham, GLAD’s Director of Public Affairs, said that GLAD was happy to lend their moral support by sponsoring the event, though they have not had any legal involvement with the legislation is France.

“We think that the growth of equality anyplace in the world is important,” said Cunningham. “The struggles in some other countries are even more difficult than ours, so we like to show that there’s a way forward.”

Participants in the rally wore red and pink to increase visibility while holding signs and French flags in front of the office of the Consulate General of France in downtown Boston.