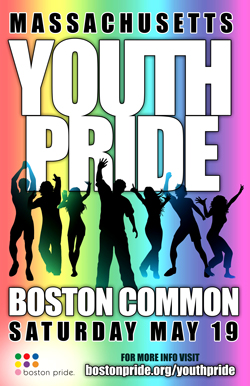 BOSTON, Mass.–Boston Pride, now more than ever, encompasses the entire spectrum of the LGBT community from A to Z, from cradle to grave, from young to young-at-heart. This year, Boston Pride is thrilled to bring Youth Pride under our wing as the event has transitioned from “The Friends of GLBT Youth.” As an older member of the Pride community, I believe it is our responsibility to help our LGBT youth as they struggle with some of the same issues that we had in coming out, and finding a safe and nurturing community with which to share our experiences.

Violence against anyone LGBT

If the recent news is any indication, there has been a significant uptick in violence and discrimination against LGBT people in general, and in particular, against youth. From the tragic suicide last month of Iowa teen Kenneth Weishuhn to the recent edict by Saudia Arabia’s government to banish gays and “tom boys” from schools and universities to laws in Russia that would limit information about LGBT issues, we daily see why Pride organizations need to have a special focus on youth.

Retracing the history of the state’s Youth Pride takes us back to 1992 when then- Governor William F. Weld created the first-in-the-nation Governor’s Commission on Gay and Lesbian Youth in response to appalling statistics from a Center for Disease Control Prevention study that showed LGBT youth were much more likely to attempt suicide than their heterosexual peers. At the time, the Governor termed the findings “shocking.” After Weld left office, Governor A. Paul Cellucci continued the Commonwealth’s commitment by issuing an Executive Order in 1998 to renew the Commission, expand its powers and enhance the executive office’s commitment to combat suicide and violence affecting gay and lesbian youth. During the administration of Governor Mitt Romney, funding was cut dramatically and the Commission was ultimately abolished. But the effort continued when a core group of individuals created the “Friends of GLBT Youth,” a nonprofit organization that has been providing funding for Youth Pride since 2005.  Then, in 2006, the state legislature created a new Massachusetts Commission on Gay and Lesbian Youth.

Boston Pride now has full oversight and responsibility of producing Youth Pride.  Youth Pride will continue to be dedicated to eradicating homophobia and transphobia in order to allow all young gay, lesbian, bisexual and transgender people the opportunity to reach their full potential.  Youth Pride works with youth and teens to provide them with knowledge and courage to be who they are in today’s society.

There will be an event to celebrate Youth Pride on Saturday, May 19th from 11 a.m. to 4 p.m. on the Boston Common. There will be a parade and festival for all to enjoy. So if you are in the neighborhood, whether you’re an LGBT youth or an adult ally, please stop by and support Youth Pride.  We are pleased to be working with LGBT youth in the community, who continue to be the driving force behind the parade and festival and in helping us understand the needs of young people in our community.

Now, for more on Boston Pride 2012 Festival and Parade … We have a great lineup of entertainers for the Festival on June 9 featuring Alexis Jordan, Rye Rye and Kerli.  We are thrilled to be bringing these great musical acts to City Hall Plaza after the Parade. On Friday, June 1st, the week kicks off with a Flag Raising ceremony at City Hall Plaza, followed by the family-friendly Pride Day @ Faneuil Hall on Saturday, June 2. Throughout the week, we’ll have events that will appeal to everyone from the Pride Pageant to Pride Idol, Boston Youth Pride Dance and to end the week, the famous Block Parties on Sunday, June 10th. This year, the Back Bay block party has been moved to St. James Avenue from Stuart Street, but it will still have the same great vibe.  And our JP Block party, being co-produced with Dyke Night this year, is going to be better than ever!

For the latest updates on Boston Pride 2012 events and programs. Please visit our website:  www.bostonpride.org

See you in Boston!