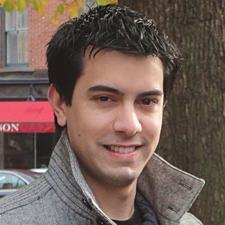 BOSTON, Mass. – Boston Pride‘s Board of Directors has named Sylvain Bruni as the organization’s new President. Bruni and other members of Boston Pride’s board will host an Open House at O’Neill and Associates, 31 New Chardon Street, Boston, on Thursday, March 20th at 6 p.m. to discuss the upcoming Pride Week and to announce the 2014 Boston Pride theme. In addition, the board will announce the winners of the 2013 Boston Pride Parade.

Sylvain Bruni is a systems engineer at Aptima, Inc. and has been involved with Boston Pride since 2004. Starting as a volunteer, he took on more responsibility and ultimately joined Boston Pride’s Board of Directors in November of 2007. Since then he has overseen multiple events and has supervised the organization’s information technology, security and communication divisions. Sylvain was co-chair of the 2012 Annual General Meeting/Annual World Conference of InterPride (the International Association of Pride Organizers), which was held in Boston. Currently, he serves as co-chair of InterPride’s communications committee and is a member of MIT’s LGBT alumni group, Fenway Health’s Young Leaders Council, HRC Partners and the French American Chamber of Commerce in New England’s Young Professionals Committee. He holds a Masters of Science in Aeronautics and Astronautics from Massachusetts Institute of Technology and a Master of Science in Electrical Engineering and Computer Science from Supelec.

Staci Stift is the newest Boston Pride Board Member
Photo: O’Neill and Associates

Additionally, Staci Stift has been named to the Boston Pride Board of Directors. Staci has been involved with Pride organizations for over 15 years and is the immediate Past President of Pride St. Louis, Inc. As President, Staci led the Board in making large strides including larger sponsorship donations. Staci is holds a Bachelor of Business degree from Belmont University. She comes to Boston Pride with 20 years of marketing, business and fundraising experience.

“After meeting and working with Staci for InterPride, we knew that she would be a great addition to our Board,” said Sylvain Bruni, Boston Pride President. “Her skills in fundraising and large-event operations will be an asset to our organization and we are excited to welcome her to the team and to show her what Boston Pride is all about.”

The remaining members of the Boston Pride Board of Directors include Malcolm Carey, Marco Torres and Rob Zuromski.

Boston Pride Week 2014 will be held from June 6 through June 15. More information and details for Boston Pride’s 2014 Pride Week can be found at www.bostonpride.org.

For real time news and exclusive updates download the app for your iPhone or Android today!