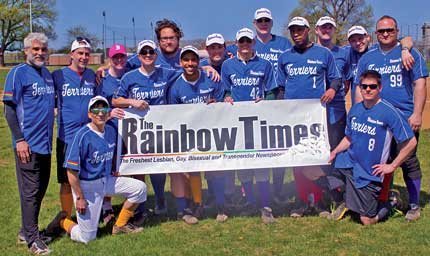 BOSTON, Mass.—LGBTQ Sports teams are not often ones that make the headline news. However, for marginalized groups such as the LGBTQ community, such sports foster pride and enhance community building through shared interests. For the third year in a row, The Rainbow Times has sponsored a team on the Beantown Softball League, BSL—The Terriers.

“The Rainbow Times is proud to sponsor ‘The Rainbow Times’ Terriers again this year,” said Nicole Lashomb, Editor-in-Chief and Co-Founder of TRT. “As the largest LGBTQ newspaper in New England since 2006 and with our headquarters in Boston, we recognize the importance of giving back to the local community. The role of any community media should go beyond that of informing others and should include supporting activities that will undeniably enhance unity through teamwork and social interactions. That is how community is built.”

The Boston Terriers began as a team of recreational players four years ago and since then; they have increased their level of skill, winning their division’s season and playoffs last year. The team, according to Paul Gagnon, the team’s coach, is now embarking on a move to an advanced division with a higher competitive level of play and traveling to softball tournaments hosted by other LGBT leagues across the country.

“The Boston Terriers of the Beantown Softball League are fortunate to be sponsored by The Rainbow Times again this year,” said Gagnon, TRT Terriers Coach since the team’s inception. “This is the third consecutive year that their generosity has provided the means for the team to play softball in the largest athletic organization open to LGBT people and straight allies in New England. Thanks to our sponsor, we are able to pay league fees, provide numbered jerseys, and pay umpires.”

The Beantown Softball League was founded in 1978 and is the largest athletic organization open to gay, lesbian, bisexual, transgender, and heterosexual people in New England, according to its website.

“I am overjoyed and grateful to have The Rainbow Times on board again this year as a sponsor of the Boston Terriers,” said Henry Paquin, Chair of Unity Pride Boston and Boston Terriers Player. “Nicole Lashomb and Graysen Ocasio are two wonderful people that understand the true meaning of community and giving back.”

The Rainbow Times Terriers’ roster is currently composed of 18 players; eight of them were on the original team.

“We are an evolving, diverse group that is altruistic, determined, and intelligent with a little bit of spunk and spirit for fun,” said Gagnon proudly. “We love softball and we love our community.”

The Beantown Softball League can be found most spring, summer, and fall weekends playing softball throughout Boston. The Rainbow Times’ Terriers are one of 27 teams in the League of 483 members. The League fosters sportsmanship, friendly competition, and access to the sport of softball for the LGBT*QQIA community. The organization provides season schedules (beantownsoftball.com), a yearly national tournament (minutemanclassic.com), and a hall of fame (bslhalloffame.com).

The Rainbow Times’ Terriers are part of the Division III of BSL. To check out the game schedule, visit: beantownsoftball.com/#.