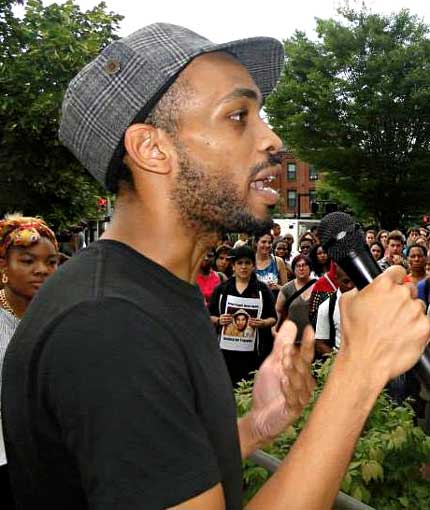 BOSTON, Mass.—With elections for Boston City Councilor At-Large quickly approaching, Francisco L. White—the 26-year-old formerly homeless freelance journalist and blogger who identifies as gay, Afro-Latino and is also HIV positive—is not a typical candidate. However, he explained why this may be an advantage.

“For so long, voters have been taught to believe that politicians should have certain backgrounds,” White said. “With the expectation that our elected officials have met very traditional standards of achievement or success, we have eliminated the diversity that is really needed in our politics. What we’ve ended up with is plenty of degree holders who have never actually had to personally deal with the issues they claim to want to resolve. I was in my third year of college, as a working adult, when I decided to run. My story is not the typical politician’s story and that’s okay. It’s my real-world education, in addition to academic experiences, that make me a uniquely qualified candidate. With that said, I fully intend to complete my undergraduate degree and law school. As for my age, let’s just say it’s been nearly twenty seven years rich with experience.”

“As a gay man who overcame homelessness at 19, I am committed to combating the youth homelessness crisis in our city and ensuring adequate consideration of homeless LGBTQ youth,” White said in the statement. “As a gay man who has been living positively with HIV for nearly six years, I recognize the importance of sex education in our public schools and will work to make it as LGBTQ inclusive and HIV/AIDS intensive as possible. I know what it’s like to be policed but not feel safe or secure under police protection. I realize that we’re not all affluent, so classist policies affect us.”

Karenga Ocean, treasurer for White’s campaign, agreed that White’s experience would benefit his work in office.

“Francisco has an understanding of issues that affect most of us because he is us,” Ocean said. “He has lived out many of the issues he wants to stand against. Francisco’s life experience will keep him grounded, realistic and in touch with the issues most of us face. There is no better person to work for change on any issue than one who knows what it’s like. Empathy cannot be faked and is essential to effective public service.”

White, a former Young Civic Leaders Coordinator for MassVOTE who was studying Communication — Digital Journalism with a minor in Social Science at Newbury College when he decided to enter the race, explained why he chose to run.

“Boston attracts thinkers and those who want to cause change, but we have trouble keeping those people here,” said White. “It’s also a city that underutilizes its cultural vibrancy and young demographic. I want to bring a cross-sectoral approach to resolving those issues while giving unheard voices an opportunity to influence municipal policy.”

As for the most dire issues currently facing Boston citizens, White said racial and economic segregation leading to achievement gaps in schools and unequal access to housing and transportation top the list and that acknowledging the root cause of these issues and creating policy to resolve them is needed.

Nick Dahlberg, the volunteer coordinator for White’s campaign, expressed why he believes White would make a good City Councilor.

“When he speaks about the problems facing our communities, you can hear his passion, and it’s obvious that what he’s saying is genuine,” Dahlberg said. “It isn’t pandering or maneuvering by any means. He has actually experienced many of the issues he talks about. I also appreciate his frankness, as well as his willingness to think radically and to ask questions that target the ‘this is how we’ve always done things’ mentality.”

White gave some advice for LGBTQ youth and homeless youth who are struggling.

“I have to be honest by saying that, contrary to what has been said, it doesn’t simply get better. Each of us has to reach that point when we’ve had enough and make it better for ourselves,” White said. “That can’t happen until you can look in the mirror every day and recognize your worth. Look in the mirror and tell yourself that you’re just as good and worthy as anyone else breathing this air. When you believe that, you won’t accept anything less than what you want for your life and you’ll make it happen.”