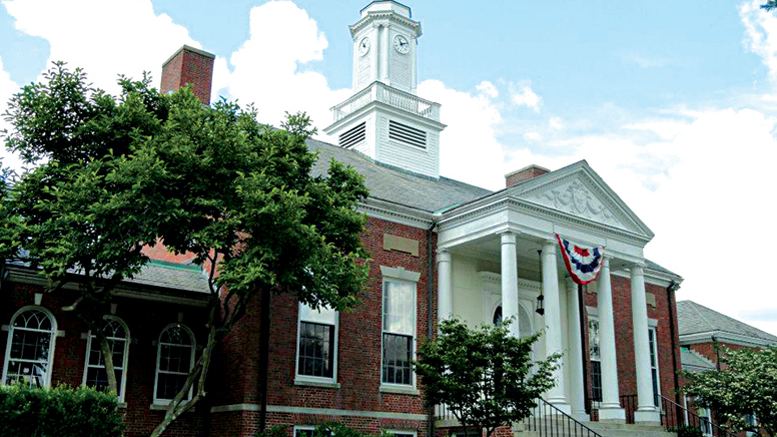 Town Hall of Dover, Mass., a small town of just over 6,000 people, west of Boston; photo: courtesy of Nicole DiCicco

In the sprawling suburbs west of Boston, resources for the LGBTQ community are scattered and clustered around larger towns and cities like Framingham, Waltham, and Wellesley.

And while Dover, a small town of just over 6,000, doesn’t have many dedicated LGBTQ resources, residents report an overall LGBTQ-friendly attitude in the area.

“We don’t care what you are; if you’re nice and work hard, we accept you,” said Gerard L. Clarke, chair of the Dover Board of Health. He confirmed that there aren’t many LGBTQ-specific medical resources in the area beside general out-patient clinics. However, he emphasized the accepting community Dover fosters.

“[It] couldn’t have been more welcoming,” said Robert Andrews, an LGBTQ resident of the town. He and his husband moved there five years ago.

“Given our experience in Massachusetts, in general,” Andrews continued, “we didn’t have too many reservations about being a same-sex couple in Dover, but we knew we would probably be one of only a few in town.”

But Andrews and his husband received a warm reception upon arriving.

“Within a few weeks … I was invited to a neighborhood coffee club with many of the women in the [town],” he said. “When we had our boys a few years later, it was amazing. Neighbors brought us food, sent us gifts, and treated us like any other new family. Everyone in town … [has] gone out of their way to make us feel at home—although I think they do that with everyone.”

Although Andrews and his husband sometimes feel isolated from the LGBTQ community, they still feel welcomed.

“Overall, I don’t think being gay has ever been an issue,” Andrews said. “However, I am just one person who is white, male, [have] been out for more than half my life and [I have] a husband and kids. Besides being a same-sex couple, our family is pretty conventional here in Dover.”

“Would it be nice,” he continued, “if there were other same-sex couples in town to socialize with? Yes. Is it a reason to move? Probably not; there are too many other great reasons to stay.

“We just toured the public elementary school as our boys are getting to be that age,” he said, “and once again, [we] felt like our family would be included and accepted.

Along with school counselor Rob Williamson, the two run the DSHS Gay/Straight Alliance (GSA), which meets once a month and, according to Huntoon, is often a mixture of LGBTQ students and allies.

“[We] took over the GSA … three years ago, and we have been working hard to create opportunities for people at the high school to show that [we] are LGBTQ-friendly,” Huntoon said. “So far we have had a lot of success. The administration and teachers have been amazing supporters of the club.”

Early in their roles as GSA advisors, Huntoon and Williamson designed and sold GSA-themed t-shirts and, to their delight, noticed many other teachers purchasing and wearing them long after the sale.

“I think it sends a powerful message to our students that it’s [OK] to be LGBTQ [at DSHS],” Huntoon continued. “I’m hoping that this message is slowly trickling down into the minds of our students.”

“For the most part, DSHS is an LGBTQ-friendly place,” said Williamson. “We have several out faculty members and I couldn’t ask for a more supportive set of coworkers. Though microaggressions likely occur with regularity, I think that the student body is, on balance, very welcoming and accepting.”

According to Williamson, out of the roughly 650 students enrolled at DSHS, 81 took part in Day of Silence demonstrations this year.

Both Huntoon and Williamson also spoke about the support they felt in the town at large.

“One of the things that always grabs my attention, as I am driving through the center of Dover every morning, is the LGBTQ rainbow sticker attached to the sign for Dover Church,” said Huntoon. “Both my siblings went through the [Dover-Sherborn] school system, and I’ve known many community members throughout my life,” Williamson added. “Though I’m sure attitudes vary from person-to-person and family-to-family, I’ve felt personally supported as an educator and as a person in general.”

The administration at DSHS also take steps on their end to improve the experiences of LGBTQ students at the school.

From January 30–31, 2015, for example, Ellen Chagnon, the director of guidance at DSHS, attended a conference sponsored by Harvard Medical School about dealing with student mental health issues. Among the conference’s learning objectives was, “[incorporating] strategies for working with young men of color and LGBT students.”

While medical resources for the LGBTQ community are sparse in Dover, residents say they’re sparse for the rest of the population, as well.

“Because [it’s] a small town, there aren’t really many resources for anyone,” Andrews said. “So LGBTQ folks are basically in the same boat as everyone else.”

“What’s nice,” he continued, “ is that we are so close to so many other communities if you want to go to [Jamaica Plain] or West Roxbury for healthcare practitioners who specialize in LGBTQ health, it’s not a far drive.”