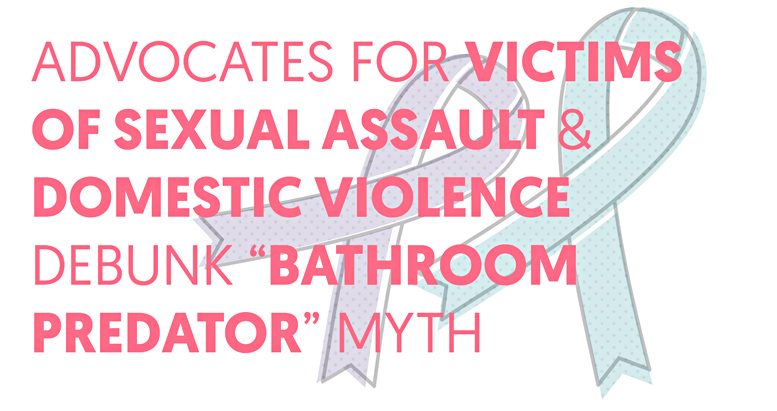 Today, Media Matters released the definitive guide to the “bathroom predator” myth that has been repeatedly debunked—by experts and government officials in 16 states and the District of Columbia, and school administrators in 23 school districts and four universities who serve an estimated 1.5 million students each year without incident. Despite overwhelming evidence, many media outlets continue to uncritically repeat the debunked myth peddled by anti-LGBT groups.

Here’s The Evidence Refuting The Myth About Trans-Inclusive Bathrooms:

Those who are pushing these proposals have claimed that these proposals are necessary for public safety and to prevent sexual violence against women and children. As rape crisis centers, shelters, and other service providers who work each and every day to meet the needs of all survivors and reduce sexual assault and domestic violence throughout society, we speak from experience and expertise when we state that these claims are false.

Transgender people already experience unconscionably high rates of sexual assault—and forcing them out of facilities consistent with the gender they live every day makes them vulnerable to assault. As advocates committed to ending sexual assault and domestic violence of every kind, we will never support any law or policy that could put anyone at greater risk for assault or harassment. That is why we are able to strongly support transgender-inclusive nondiscrimination protections. [National Task Force To End Sexual And Domestic Violence Against Women, 4/21/16]

If these same people were concerned about the safety of women, they would have come out against any number of issues that have come up about sexual violence over the years, but they have been remarkably silent. So all of a sudden women are in danger because of transgender people? No. They’re not. [Media Matters, 10/15/15]