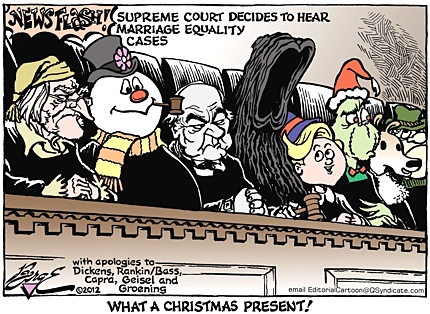 A famous Italian Catholic has had a big change of heart regarding marriage equality after publicly saying some pretty nasty things about gays.

“I’m upset about the way I was portrayed,” this public figure said. “What you see in the media is not the real me. Gay people should be married. I should be allowed to change my mind on this.”

I couldn’t agree more. People should be allowed to change their minds, especially when they move from an uninformed to an informed opinion.

And with the announcement that the United States Supreme Court will hear cases regarding the Defense of Marriage Act and California’s anti-gay Proposition 8, I have to say I almost wish that Angelina Pivarnick of Jersey Shore, who made the above comments, was an Associate Justice.

Granted, part of the reasoning that Pivarnick gave for her (allegedly changed) belief that gays shouldn’t get married was “I don’t want a girl’s mouth on my p#$$y, sorry,” but I would certainly choose her over Antonin Scalia, an actual Associate Justice who has a long history of animus towards gay people and whose arguments make about as much sense as Pivarnick’s.

Take what Scalia said on Dec. 10 during a talk given to students at Princeton, for example: “If we cannot have moral feelings against homosexuality, can we have it against murder?”

Ah, yes. The old “homosexuality to murder” comparison. Actually, comparing homosexuality to things that are truly terrible is one of Scalia’s specialties. And a gay freshman at Princeton called him out on it.

Duncan Hosie asked about Scalia’s dissents in gay rights cases, specifically “his mentions of murder, polygamy, cruelty to animals and bestiality” according to a story on Princeton’s website. Hosie, not surprisingly, “found the comparisons offensive.”

“Do you think it’s necessary to draw these comparisons, to use this specific language, to make the point that the Constitution doesn’t protect gay rights?” Hosie asked Scalia during a Q&A following the talk.

“I don’t think it’s necessary, but I think it’s effective,” Scalia said. “It’s a type of argument that I thought you would have known, which is called a reduction to the absurd. And to say that if we cannot have moral feelings against homosexuality, can we have it against murder, can we have it against these other things? Of course we can. I don’t apologize for the things I raised. I’m not comparing homosexuality to murder. I’m comparing the principle that a society may not adopt moral sanctions, moral views, against certain conduct. I’m comparing that with respect to murder and that with respect to homosexuality.”

First of all, gotta love how Scalia talks down to this kid: “It’s a type of argument that I thought you would have known.” This is especially dickish because Hosie didn’t ask what category of argument Scalia was working in, he asked why Scalia unleashes such invective when talking about gay people.

Scalia’s prejudice against gay/lesbian rights issues and gay and lesbian people is well documented and long. In fact, some folks are even calling for Scalia to recuse himself from the DOMA and Prop. 8 cases. I’m not going to hold my breath. Scalia doesn’t see gays and lesbians as human beings, he sees them as people who do sex stuff he thinks is gross. Recusing himself would be the right thing to do, and I doubt Scalia is all of a sudden going to do what is right when it comes to gays.