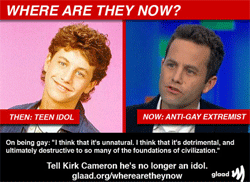 By: D’Anne Witkowski/Special for TRT–

On March 2 Kirk Cameron was on CNN’s Piers Morgan Tonight for some reason. To many viewers it must have come as quite a shock that he was still alive (that was Corey Haim, folks). But if you want to get people talking about you again, your best bet is to go on TV and say something crazy. And that’s just what Cameron did.

Now, Cameron’s extreme right beliefs are no secret. He’s a pin-up boy for zealous Christianity these days. But usually the stuff that comes out of his mouth has a limited audience. Not so this time.

During the interview, Morgan asked Cameron about gay marriage. Cameron responded, “I believe that marriage was defined by God a long time ago. Marriage is almost as old as dirt and it was defined in the garden between Adam and Eve, one man one woman for life, ‘til death do you part. So I would never attempt to redefine marriage and I don’t think anyone else should either. So do I support the idea of gay marriage? No, I don’t.”

Now, someone who believed in evolution obviously wouldn’t be making the argument that marriage was older than dirt. Certainly if we turn to science we would find otherwise. But facts are for the godless. I also think it’s important to point out that the Bible says a lot of stuff about marriage, and it isn’t all “one man one woman for life.” Some crazy shit happens in the Bible, people.

Morgan then asks if homosexuality is a sin.

Homosexuality & View of the future

How does Cameron know what will “ultimately” be “destructive to so many of the foundations of our civilization,” you ask? Because he’s seen the future. He starred in the low budget movie based on Tim LaHaye’s Left Behind series, a zany Armegeddon-Rapture rom-com. He’s no doubt read the whole series. He knows the Truth.

But what if one of Cameron’s six kids ended up gay?

“I’d sit down and I’d have a heart to heart with them,” Cameron says. “Just like you would with your kids.”

Morgan interrupts: “But it one of my sons said that I’d say, ‘That’s great son, as long as you’re happy.’ What would you say?”

Don’t act on everything, but judge others

“Well, I wouldn’t say that’s great son as long as you’re happy,” Cameron responds. “I’m gonna say there’s all sorts of issues that we need to wrestle through in our life and just because you feel one way doesn’t mean we should act on everything that we feel.”

Hoo boy. Here’s hoping that none of the Cameron kids are gay. And here’s hoping that if they are they’re strong enough to break away from Daddy’s homophobic stronghold and misguided sense of morality.

Cameron’s comments caused quite a stir, needless to say. Morgan even said that Cameron was “brave” for saying these things. I don’t think “brave” is the right word. “Tone deaf” and “ignorant” feel more accurate to me. And that’s the Truth.