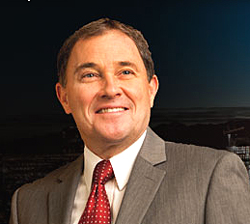 Yes! Utah is on a fast track to becoming the first sex-free state in the country. I know, I know, a lot of people already thought it was. But the status was never official. Thanks to Utah’s legislators (dominated by Republicans. Surprise!), the dream could become reality.

The Senate and House passed a bill that dismantles sex education in the state. It’s an incredible, groundbreaking bill that, among other things, absolutely forbids any discussion of homosexuality, premarital sex, or contraception, even if kids ask about it. Teachers are not allowed to talk about such horrible, horrible, things. It also allows schools to choose an abstinence only sex education program, or to just say, “F@&k sex education,” and not teach it at all, leaving it up to parents.

“I recognize that some parents do not take the opportunity to teach in their own homes, but we as a society should not be teaching or advocating homosexuality or sex outside marriage or different forms of contraceptives for premarital sex,” Sen. John Valentine (R-Orem) told the Salt Lake Tribune. Damn straight (pun totally intended).

For some reason, a lot of people are upset and are urging Gov. Gary Herbert to veto the bill. Will he or won’t he? Only his hairdresser knows for sure. For now, he’s saying his signature or veto depends on whether it’s “good policy for the state of Utah.”

Everyone knows sex is a menace to society (especially the gay kind). It’s something that should not be happening under any circumstances besides a man married to a woman making a baby (not trying to make a baby, folks, but life-begins-at-conception making only. Anything else is cheating. No freebies!). And yet, somehow, as the wise members of the early 90s group LaTour once lamented, “People are still having sex.” And that was over 20 years ago! Why won’t sex just crawl back into its hole (or any other inappropriate metaphor)?

The answer is deceptively simple: people be talkin.’ That’s right. The Sex Problem in America is due to the Talkin’ About Sex Problem in America (Salt-N-Pepa, I’m looking at you). The key to solving any and all problems is to stop talking about them. If you don’t talk about it, it doesn’t exist. Wa la! It’s genius, really.

Not everybody sees the wisdom, however.

“What this bill is, is a mandate against reality,” Sen. Pat Jones (D-Salt Lake County) told her fellow lawmakers. Clearly she has never had an unintended pregnancy that she just pretended wasn’t happening so it would just go away.

Other naysayers include the Utah Education Association. “Frankly, we see … this as a need to protect children who may not have the opportunity to get the needed information on critical issues that are life saving in some cases,” the UEA’s Kory Holdaway told the Salt Lake Tribune.

Ugh, that old “protecting children” argument. You know what we need to protect children from? Their evil sex-parts.

Other forces also seem to be conspiring against Utah’s wise lawmakers, too: “If the goal is to prevent teen sex, however, Utah lawmakers may be working against their own ends. Research released yesterday by the reproductive health research organization The Guttmacher Institute found that receiving sex education actually delays teen sex.” The source for this info? LiveScience.com. Boo!

The Utah legislature is already working on an abstinence-only science education bill.