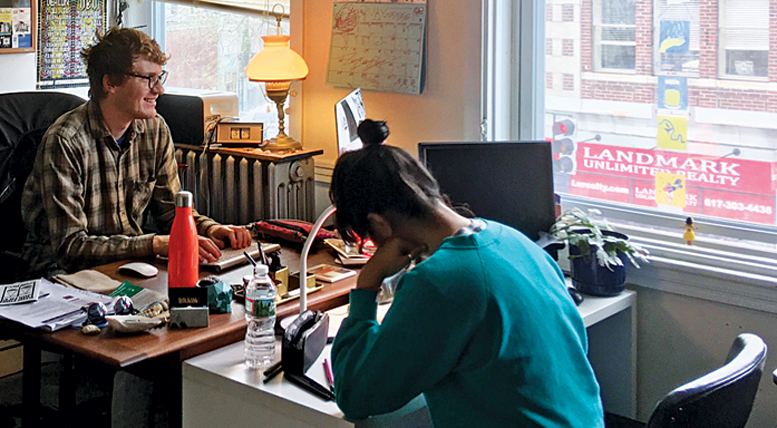 They’re sitting in the headquarters of Boston Hassle, a music and arts organization headquartered in the Dorchester Art Project office in Boston.

The two are members and planners of Yes Fest, a self-described, “radically-inclusive arts and music festival” and a project of Hassle.

“Our [goal] is empowering teens to have ownership and the wherewithal to organize and generate their own culture—like do-it-yourself art and music shows,” said Kaplan, one of the Yes Fest coordinators. “We started that by having different music and youth nonprofits recruit volunteers, adults, and teens, while still being open to volunteers not necessarily affiliated with specific organizations.”

The festival is comprised of and planned by several local organizations—specifically, the Brookline Teen Center, ZUMIX, Girls Rock Campaign Boston, BrainArts and the West Suburban YMCA.

Sarah Saydun, the Pathways Coordinator at ZUMIX and organizational representative at Yes Fest, agreed with Kaplan with regards to the importance of the event.

“It’s extremely important to me that there are safe spaces and exciting events that exist for teens in this city,” she said.

“The … idea was for it to be radically inclusive,” Kaplan said. “We try to keep it teen-driven, teen-empowered.”

Yes Fest hosted its first festival in October of last year. Since then, they’ve hosted smaller shows, exhibitions, and performances.

“It’s a passion project of ours,” said Gabi Barroso, another Yes Fest coordinator, and sophomore at Revere High School. She said she had the idea when she and a friend were discussing Pride festivities in the area.

For their most recent project, they’re hosting a youth Pride alternative at ZUMIX—a teen center in East Boston—on June 9, from 7:00 to 10:00 p.m.

“All the brown gay events [in the area],” Barroso explained, “are obsolete and taken over by Caucasian gay events that are super old, 21 and older, and involve no sense of creativity and expression.”

And, they decided to host their own ball—in typical Yes Fest style, incorporating aspects of dance, fashion, and art.

Barroso recalled not having such resources as a young child.

“I grew up—was born and raised—in Revere,” she said. “I was very much a local in that sense. So, going out and understanding … the local music scene [and] the local queer scene is very scary and intimidating. It’s been a weird thing to navigate.”

She hopes this event will help youth experiencing similar issues.

“Our main goal is to show queerness in the way it should be shown—as a growing community,” she said. “I want queer folk from low-income areas to be able to free themselves, even it’s [only] for a night.”

According to Barroso, the Pride Ball is one of the first events of its kind in the area.

“I think this is the first … radically inclusive event of this caliber,” she said.

“Giving credit where it’s due, I don’t think we’re the first teen LGBTQ activist group to come on the scene … but we’re far from the point in the Greater Boston area where it seems like there’s really something for everyone,” Kaplan added.

There are similar events in the area: Boston LGBTQ youth group BAGLY’s Youth Pride & Prom event in late May, for example, or Boston Pride’s Youth Pride Dance, also on June 9.

But the youth-driven spirit of the Pride Ball is what, according to Kaplan and Barroso, sets the event apart from others.

“This is teens with their own volition, driven by a desire to see the things they want to see,” Kaplan continued.

Along with doing one-on-one college and career counseling—among other roles—at ZUMIX, Saydun has helped out both with Yes Fest and the Pride Ball.

“I’m honored to be a part of the [teams],” she said, “and am excited to help make [the] youth vision for this event a reality.”

According to Barroso, Yes Fest and the Ball will act like a “North Star” of inclusion and acceptance for young LGBTQ communities across Massachusetts.

“I will throw my body to the dogs for accessibility,” she said, “especially for youth of color and underprivileged youth.”

“When this idea was submitted to the committee, I was totally excited by it,” Kaplan later said. “[It’s] a really unique event that speaks directly to the interest and the needs of youth in Boston and to a subset of youth who don’t feel like they’ve got things made for them. It’s a really cool thing to have helped start a committee that can be a vehicle for that kind of thing.”