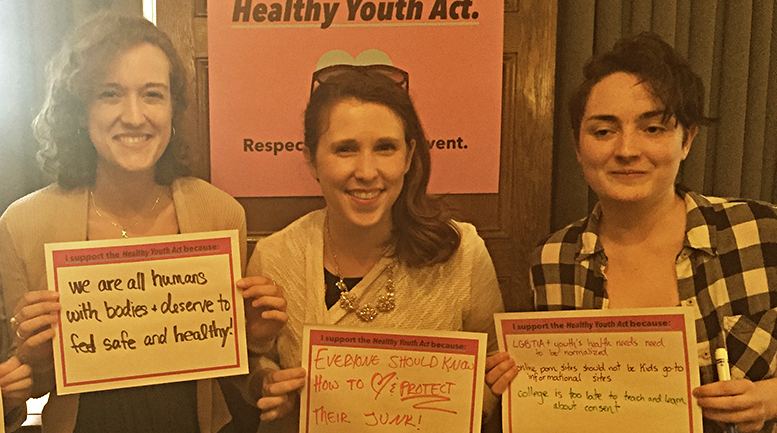 By: Dr. Jennifer Childs-Roshak/TRT Guest Columnist—
On Monday, June 25, nearly 70 people gathered at Boston’s Old South Church to speak about something many people only whisper about: sex. Parents, teens, educators, and advocates shared what they and others learned—or didn’t learn—in their sex education classes, how that has impacted their lives, and what Massachusetts can do to ensure sex education never fails another student again.

Dinah, a peer educator, talked about how she thought she had good sex education in school until she realized the lessons promoted LGBTQ stereotypes. Kim, Gloucester High School’s nurse during its infamous “pregnancy pact,” revealed that there wasn’t a pact at all: the 18 pregnancies that occurred over the course of that school year directly resulted from a lack of sex education. Sabina acknowledged she thought she knew how to talk to her kids about sex until she realized how little she herself had been taught about consent and healthy relationships.

Each of the dozen storytellers were motivated to share their personal stories about how bad sex education has failed them because they’re hopeful they can persuade Massachusetts lawmakers to finally pass the Healthy Youth Act before the end of July when the legislative session ends. One-by-one, the storytellers pleaded for legislators to give today’s young people a better chance at a healthier future by improving access to comprehensive sex education and shutting down harmful abstinence-only programs in Massachusetts’ public schools.

Even as they took the brave step of talking about their personal experiences with a room full of strangers, nearly every person who shared their story talked about how hard it can be for parents and teens to broach the topic of sex. And they are right. More than 60 percent of Massachusetts teens have not had a conversation about sexual health with their parents in the past year, according to the 2015 Health and Risk Behaviors of Massachusetts Youth report.

As a mom of two boys, I, too, know just how awkward those conversations about sex can be—for parents and teens alike. The very fact that adults feel awkward talking about sexual health underscores the importance of ensuring young people have somewhere to turn for unbiased, factual information about their health and bodies. When parents and schools work together to support teens, no one is left without the information they need to protect their health.

The Healthy Youth Act would help create that support network by ensuring any public school electing to offer sex education teaches a curriculum that is medically accurate, age-appropriate, and inclusive of LGBTQ youth. This legislation would guide schools as they choose curricula that help young people delay sex and protect themselves from sexually transmitted infections (STIs) and unintended pregnancy if they do have sex. Not only can the Healthy Youth Act improve sex education, it will protect young people from the abstinence-only programs currently allowed in schools across our state.

As it stands, Massachusetts allows public schools to use sex education programs that lack medically accurate information, shut LGBTQ youth out of the conversation, and perpetuate harmful stereotypes about gender roles. There is no guarantee these programs will provide accurate information about how to prevent unintended pregnancy or STIs, leaving young people vulnerable to misinformation and reliant on pop culture, Google, or pornography for their sex education.

Leaving teens with the internet as their only resource is particularly worrisome because sex education is about more than sex—it’s about building healthy relationships and acquiring communications skills and recognizing, respecting, and understanding consent—values not often modeled in what our teens watch online. For speak-out participant Lizzie, her sex education covered the basics of physical health, but it failed to prepare her for how to recognize that she was in an emotionally abusive relationship. Consent-focused sex education prepares young people to handle difficult personal situations, while also combatting the broader culture of harassment, assault, and abuse brought to light by the #MeToo movement. Now that this culture has been exposed, it’s time to transform it into one based on affirmative consent.

The need for the Healthy Youth Act has never been more urgent than it is today. Not only is a meaningful action to prevent sexual misconduct long overdue, the federal government is making it harder for all our communities to stay safe and healthy. The Trump-Pence administration is abandoning the federal government’s evidence-based approach to sex education in order to peddle medically inaccurate abstinence-only programs that erase LGBTQ young people. Without the Healthy Youth Act, Massachusetts public schools will be left defenseless against the Trump-Pence administration’s harmful agenda that puts extreme ideologies ahead of science. Yet, with less than a month left in the legislative session, the Massachusetts House of Representatives has yet to vote on this effort to protect our young people.

The storytelling event on June 25 is a part of our final, urgent push for the Healthy Youth Act, and our coalition will only get louder. On Tuesday, July 17, we are storming the Massachusetts State House to make our voices heard for LGBTQ-inclusive, consent-focused sex education and sharing our sex education stories with our state representatives. Join us and urge your representative to pass the Healthy Youth Act!

*Dr. Jennifer Childs-Roshak is the president and CEO of Planned Parenthood Advocacy Fund of Massachusetts.