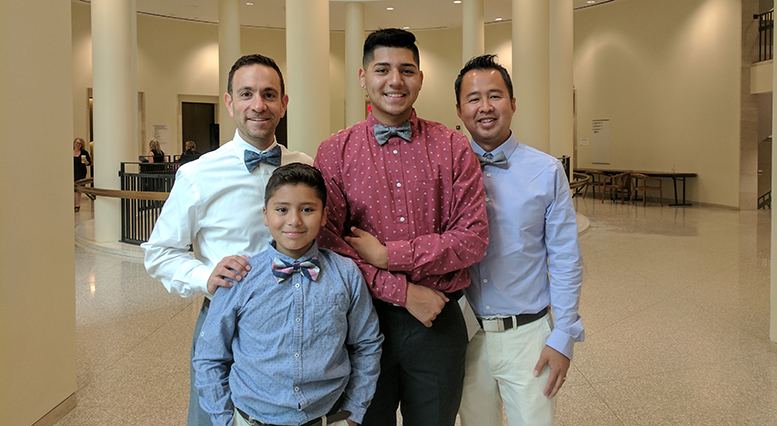 For same-sex couples, there is another adoption agency to consider in the Boston area

Yaffe and Lee finalized their adoption last August. It’s one of 18 adoptions to LGBTQ couples or singles facilitated through Cambridge Family & Children’s Services (CFCS). The organization specializes in facilitating adoptions for children who are in the custody of the Massachusetts Department of Children and Families, particularly older children and teens.

Anyone who wants to adopt a child in the custody of the Commonwealth needs to complete a Massachusetts Approach to Partnerships in Parenting (MAPP) class. Yaffe and Lee described the training as an eye-opening experience.

“Every parent should do this regardless of whether they adopt,” Yaffe said. “I knew two different couples who had adopted. Both had really positive experiences.”

The MAPP class was also the first introduction to CFCS for Sandra and Jessie Desjardins, who adopted 5-year-old Ava and 8-year-old Skyla last November. They were nervous going into the class, but immediately felt welcomed by the diverse group of attendees.

“There were people from so many different backgrounds, from couples not able to conceive to gay couples to single moms and single dads,” Sandra said.

CFCS Executive Director Bob Gittens has spent his career advocating for children’s welfare. He served as cabinet secretary of the Commonwealth’s Executive Office of Health and Human Services from 2001 to 2003 and was Commissioner of the Massachusetts Department of Youth Services from 1997 to 2001.

“All my life I’ve been looking at ways in which I can be helpful in supporting kids thrive and grow,” he said. “Growing up in the inner city and seeing kids heading to child welfare or [the] juvenile justice system, I knew that there were ways that adults can intervene to affect those outcomes.”

Gittens said CFCS tries to be as accommodating as possible to all of its clients, which is what he feels sets the organization apart from other adoption agencies in the Boston area.

“We have a very welcoming and outgoing approach in terms of being welcoming to folks from all backgrounds,” Gittens said. “We do have a reputation for being very receptive. Some families have come to us after not feeling welcome at other organizations.”

CFCS handles all aspects of the adoption process, which includes a home evaluation, court filings, and post-placement support. The amount of time needed to progress through these steps varies by family, Gittens said.

“We tend to work with children who are a bit more difficult to place because they are in sibling groups,” he said. “We want to make sure there’s a good fit between children and families.”

The process moved quickly for the Desjardins, who completed the home study in October 2014 and welcomed Ava and Skyla into their home a few days before Christmas that year.

“They moved in the midst of a holiday party and then went right into Christmas, so there was a lot of excitement,” Jessie said. “It was an intense moment in time but worth it to see how excited they were to move in with us.”

Yaffe and Lee experienced a similar sense of connection when they adopted their boys. Yaffe described meeting Saul for the first time as the start of a bond that’s only gotten stronger over time.

“When we first met him I describe it to people as he gave us this huge hug and he hasn’t let go ever since,” he said. “We gave piggyback rides, ran through the grass barefoot and felt really free.”

CFCS has worked with LGBTQ couples for as long as anyone on staff can remember—at least 20 years. The organization’s philosophy is that a stable home transcends the type of people who live in it.

The agency hosts an adoption panel as part of the MAPP training and strives to make sure that an LGBTQ couple is included in every session. They also encourage families to stay in touch with each other and with staff after the adoptions are complete.

When it comes to the children themselves, they seem to take having two parents of the same gender as a badge of honor.

“They are proud to tell everyone they have two moms,” Sandra said. “It’s nothing to them at school or anywhere else … it’s just part of their normal day-to-day.”

While some may think of adopting a baby as the only way to start a family, Lee encourages everyone to consider adopting older children.

“There are lots of other great older foster kids out there who can learn to love you and be part of your family if you give them the opportunity,” he said. “The most important thing is to get yourself educated and find out.”

To learn more about the services offered by CFCS, visit their website.