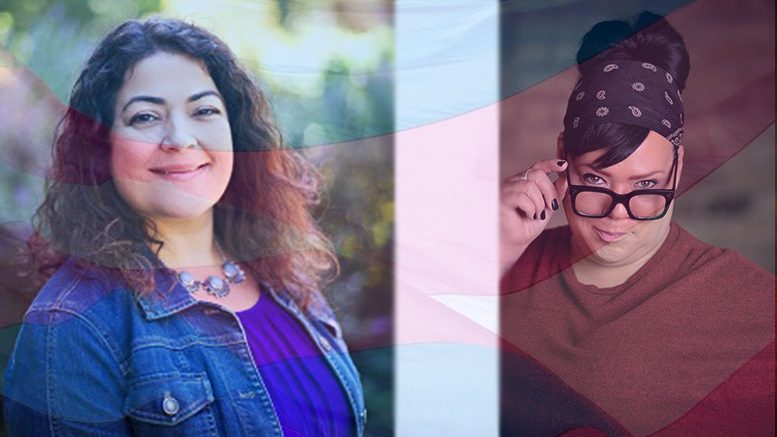 (Left) Anneliese A. Singh, Associate Dean of the Office of Diversity, Equity, and Inclusion in the College of Education at the University of Georgia and co-founder of the Georgia Safe Schools Coalition, will be the Professional Track Keynote Speaker at the conference; and Dina Nina Martinez (Right will be the General Track Keynote Speaker at the PTWC; Photos: Mazzoni Center

PHILADELPHIA—Mazzoni Center has just announced that transgender stand-up comedian and actor Dina Nina Martinez will be the General Track Keynote Speaker at its annual Philadelphia Trans Wellness Conference, to be held this year July 25-27 at the Pennsylvania Convention Center in downtown Philadelphia. Martinez’s keynote address is scheduled for 11:30-12:45 on Thursday, July 25.

Previously, it was announced that Anneliese A. Singh, Associate Dean of the Office of Diversity, Equity, and Inclusion in the College of Education at the University of Georgia, and co-founder of the Georgia Safe Schools Coalition, would be the Professional Track Keynote Speaker at the conference. Singh’s keynote address, “Trans Liberation is for Everybody: Moving from Affirmative to Liberatory Counseling with All Genders,” scheduled for Thursday, July 25 at 10 a.m., will explore the need to move beyond affirmative approaches to trans and nonbinary counseling approaches to healing that is grounded in liberation, justice, and co-conspirator goals.

Dina Nina Martinez, who was called “ … very funny.” by the Late Late Show’s James Corden, is a transgender stand-up comedian and actor. Her signature blend of disarming sass and charm has been featured in comedy festivals and multiple world-class comedy venues including LA Pride, The Chicago Women’s Funny Festival, LA’s The Comedy Store and Chicago’s Zanies Comedy Club.

She is a Huff Post blogger, the founder of Lady Laughs Comedy & Artemis Bow Productions and writer of The Misadventures of Delilah James. She was named one of the “58 Trans Women Actors You Should Know & Also Love” by AutoStraddle and won Madison’s favorite Local Comedian as voted by the readers of the Isthmus.  She will be in the upcoming film 2 Men & A Pig with Dermot Mulroney.

About the Philadelphia Trans Wellness Conference

The Philadelphia Trans Wellness Conference, a program of Mazzoni Center, was created to educate and empower trans, gender non-conforming, and non-binary individuals on issues of health and well-being, and educate and inform allies and health service providers, and to facilitate networking and community building.