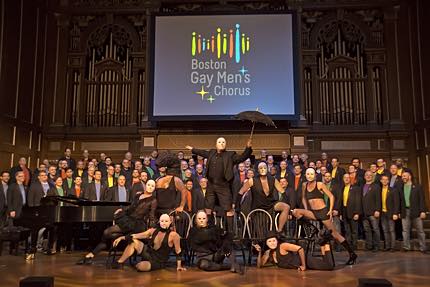 The Boston Gay Men's Chorus at a 2014 concert
Photo: BGMC

The Boston Gay Men’s Chorus at a 2014 concert
Photo: BGMC

Had enough of blustery blizzards, crawling commutes, and space-saver shenanigans? The Boston Gay Men’s Chorus (BGMC) promises to melt your winter blues with Wicked Awesome, a celebration of the music of Stephen Schwartz, the composer/lyricist of Broadway blockbusters Godspell, Pippin, and Wicked. We predict there’ll be more spring in your step—if not in the weather—after the curtain falls on this concert. The kicker? Schwartz himself will take the stage to perform favorites from his abundant oeuvre along with our guys. To quote a Pippin lyric, they’ve “got magic to do, just for you.” Read on to learn what BGMC Musical Director Reuben Reynolds has to say about Schwartz and Wicked Awesome, which takes place March 21 and 22 at Jordan Hall.

Q: First things first. BGMC is performing with Stephen Schwartz! That’s a great “get.” How did this collaboration come about?

A: Stephen is a wonderful, kind, generous man. This idea to grow this show around his music started with the San Francisco Gay Men’s Chorus. The director there had a friend who was a good friend of Stephen’s so he connected them, and Stephen decided to come out to San Francisco and of his music and appear with the chorus to sing a few songs. That led to a collaboration with the Gay Men’s Chorus of Los Angeles and now BGMC.

Q: Stephen Schwartz has fans that span several generations thanks to Pippin and Godspell, the songs he wrote for films like Pocahontas, The Hunchback of Notre Dame, The Prince of Egypt, Enchanted, and of course, Wicked. What is your experience of Schwartz’s work?

A: When I was a young person growing up in South Georgia, we had never been to the theater, we had never done anything like that. And my father and mom decided one year to take us to New York for Christmas. We saw our first Broadway show and it was Pippin. It had just opened, and we were both amazed because Irene Ryan, who played Granny on the Beverly Hillbillies, was in it and my brother Jay and I just thought that was the neatest thing ever. We had a blast, we loved everything. I remember almost killing myself in the hotel hallway trying to do kicks like the singers did on stage. And both my brother and I just fell in love with theater right then. Jay is still a costume designer, and I work at the Boston Conservatory in the musical theater department and a lot of it is because of that very first experience. Stephen’s work has been so important in my life ever since. I’ve loved every show he’s done. We were lucky enough to see the 2012 revival of Pippin here in Boston, so it’s kind of close to my heart.

Q: What are some of the songs we’ll get to hear during Wicked Awesome?

A: Stephen has such a wide variety. The piece that we’re opening with is called “The Spark of Creation” from the musical Children of Eden. It talks about finding that little spark inside of you and creating something special in the world with it, to really be part of the world. Of course, we’re going to sing a lot of music from Wicked. “Popular,” “No One Mourns the Wicked,” “For Good.” From Godspell, probably my favorite Stephen Schwartz song is “Beautiful City.” It talks about how we can build a beautiful city together from what we have here, if each one of us contributes and works together. We’ll do a whole set of songs from Godspell.

We’ll also have music from the movies. We’ll do “That’s How You Know,” a calypso dance number from Enchanted. We’ll do a whole set of things from musical movies—The Prince of Egypt, The Hunchback of Notre Dame, Pocahontas. Stephen has his fingers in so many pies. He writes for shows but he writes for the movies too. So much of the music is celebratory and so joyous to sing.

Q: You’ll be singing “Testimony,” an LGBT-affirming piece by Schwartz that was inspired by the “It Gets Better” project. What can you tell us about this song?

A: As Stephen got to know more about the mission of the San Francisco Gay Men’s Chorus and find out what the chorus was about, he wanted to write something special for the Gay Men’s Chorus Movement. He reached out to the It Gets Better project, which spreads positive messages to LGBT youth through the personal testimony of LGBT adults who lived through hard times, looking for lyrics. Inspired by the actual words of It Gets Better participants, Stephen wrote this really wonderful piece called “Testimony” for men’s chorus.

“Testimony” talks about the experiences of what it is like to be a child and to be scared and to want to kill yourself because you don’t know how you’re going to get through [the negative experiences of growing up LGBT]. Then it takes it from the perspective from a singer in the chorus who said, I had all of these experiences and I made it through and you can, too—look what a wonderful world I found after I made it through. I grew up and I matured. I found friends I never would have known, and now that I look back, I can see that I had support all around me, I just had to find it.

The piece is incredibly moving and we’re so lucky to have Stephen here, first to sing for us, and to share his joy in making music, but even more to explain why he felt it was so important to write this piece of music about LGBT youth making the transition into adulthood and finding out what it was like. I think it will be incredibly moving for the guys in the chorus and especially for the audience. The piece is just absolutely gorgeous, and it’s just so wonderful to work on it in rehearsal.

Q: New Englanders have are feeling a little worn down and beaten up by all of snowy cold and its messy aftermath. How can Wicked Awesome pull us out of winter’s death grip?

A: It should be an incredibly uplifting and a fun night. We have incredible solos from the chorus, we have Stephen singing and talking about his music. It’s a really bright, cheery, fun night for the middle of March in Boston.

In Boston you can feel like, I’m so tired of weather, it’s so dreary. This show is like a ray of sunshine and happiness. For everybody who is tired of the weather and ready to move on to something else, it will brighten your day, it will leave a smile on your lips. You will go out humming all these wonderful tunes that you’ve always known. It will be the perfect antidote to whatever is going on outside.

A former story about the BGMC can be found here.