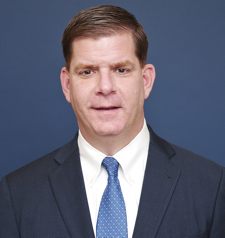 BOSTON, Mass.—Last week, Mayor Martin J. Walsh and the City of Boston signed on to the Freedom to Marry Brief, in support of marriage equality for same-sex couples. In 2014 the Sixth Circuit Court of Appeals held that gay men and lesbians, unlike all other individuals, have no fundamental right to marry (DeBoer v. Snyder, 772 F. 3d 388 (6th Cir. 2014).

This session the U.S. Supreme Court is taking up a case that would resolve this question and if the Freedom to Marry opinion prevails, end same-sex couples’ exclusion from marriage nationwide. The Freedom to Marry Brief is supported by 226 Mayors and 40 cities across the country and the U.S. Conference of Mayors, the International Association of Municipal Lawyers Association, and the National League of Cities.

Mayor Walsh has a long history of strong support for the LGBTQ community. In his current role, he has actively participated in events related to Boston Pride, served as the keynote speaker for The Men’s Event and The Women’s Event to benefit Fenway Health, and worked with City Council and the City’s Public Employee Committee to guarantee transgender municipal employees and their dependents access to gender reassignment surgery, hormone therapy, and mental health services. Some of Mayor Walsh’s key appointments to his Cabinet and administration are gay, including the City’s first ever Chief of Civic Engagement.

Mayor Walsh’s leadership on marriage equality emerged early in his career as State Representative when he helped lead the effort with MassEquality and the Massachusetts Gay and Lesbian Political Caucus to stop the anti-gay marriage constitutional amendment. He is credited by state and national LGBTQ rights organizations as one of the key influencers in making marriage equality a reality in Massachusetts.

Mayor Walsh strongly believes that LGBTQ equality is a human rights issue. As a state legislator he: