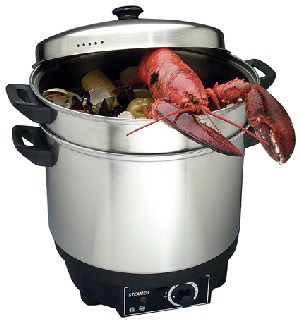 By: Nicole Lashomb*/TRT Editor-in-Chief—
In a recent interview with More, Jennifer Beals discusses many interesting topics, having to do with female rights, as part of promoting her new series The Chicago Code.

Dissapointed about The L Word finale, she made a comparison that made me think. She said: “Do you know the lobster theory? When you cook a pot of lobsters and they’re all male, you need to put the top on, because if one male gets out, he’ll try to help the others get out. But if you’re cooking a pot of female lobsters, you don’t have to put the top back on, because if one female starts trying to get out the others will try to drag her back into the pot. Isn’t that awful? My point is, we’re not lobsters [bringing each other down]. It would have been nice to end it differently.”

It was an excellent and succinct point. I thought back about the TV shows that I have watched over the years. One of the shows, The Apprentice, portrays such behavior frequently. When working together, Donald Trump told former NBC’s Today Morning Show host Katie Couric several years ago that women worked rather well together. Once placed in groups with males, he added—and I phrase—“they self-destructed as an entity.” As I watched The Biggest Loser last night, I also noticed the same pattern. Yet, the opposite happens with men, as Beals stated in her quote. They stick together when things get tough, or when they don’t. Is this the “bromance” that has triumphed over even the closest of heterosexual relationships? And, why is it that women behave in such a manner toward other women? Does this also happen amongst lesbians?

It does, unfortunately. I tend to think it happens less, but lessons learned have also taught me the difference between working with men and women. It is an unfair world and many women make it more unfair when they do not stand together in sisterhood, and support each other. It is shameful to hear mothers say, “I prefer boys over girls!” What message does that send our young girls? Not a positive one, for certain. This too, I consider a form of bullying. It reminded me of Dr. Phil’s words to a heterosexual couple whose husband had had an affair. The husband blamed the woman he had the affair with, and so did his wife, instead of blaming her husband whom she had married and broke his vows.

I pose this question to you: Is this behavior exhibited by many women the result of self-loathing, gender inequity, society’s objectification of women, or merely a result of a glass ceiling theory that keeps women in subservient positions in the workforce resulting in abstaining them from being fulfilled and in powerful positions?

Hopefully, this Season and in the New Year women will treat one another better, with a more fulfilled sense of the societal placement and the realization that such a predicament is not always a result of other fellow women’s actions. We can compete and disagree without it escalating to anything more than just a disagreement. It is time to start bonding and moving this community forward, together, in a womanly embrace and even perhaps a “femance” or “girlmance.”

To everyone, LGBTQI and allies, please have a safe and Happy Holiday Season!

*Nicole Lashomb is the Editor-in-Chief of The Rainbow Times and Co-Ed of Project Out. She holds an MBA from Marylhurst University and a BM from the esteemed Crane School of Music. Nicole can be reached at editor@therainbowtimesmass.com.