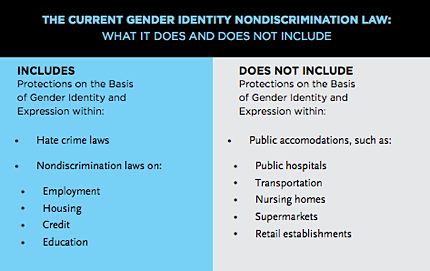 BOSTON, Mass.—Nearly two-thirds of transgender Massachusetts residents have experienced discrimination in a public accommodation setting in the past 12 months and those experiencing this discrimination were nearly twice as likely to report adverse physical and mental health outcomes, according to a study released today by The Massachusetts Transgender Political Coalition (MTPC) and The Fenway Institute at Fenway Health.

The Gender Identity Nondiscrimination Act, passed in 2011 and implemented in 2012, does not cover public accommodations. Public accommodations include “any place that is open to the public and provides good or services” such as hotels, restaurants, public parks, buses, trains, theatres, hospitals and health care centers.

In 2013, MTPC and Fenway’s LifeSkills Team launched a community-based statewide stress and health needs assessment called Project VOICE (Voicing Our Individual and Community Experiences). The team surveyed 452 Massachusetts residents to evaluate the needs of the community in all areas of public accommodations and health. The questions assessed multiple aspects of transgender-related discrimination in public accommodation settings including actions such as unfair treatment, denial of service based on gender identity or appearance, aggressive language, and physical threats. [pullquote]“The initial findings of Project VOICE may be startling to those unaware of the persistent and ongoing discrimination faced by transgender and gender nonconforming people. Unfortunately, those of us who work with gender minority communities know that mistreatment is all too common. … —Dr. Sari Reisner, ScD, transgender health researcher and LifeSkills Investigator at Fenway[/pullquote]

“The initial findings of Project VOICE may be startling to those unaware of the persistent and ongoing discrimination faced by transgender and gender nonconforming people. Unfortunately, those of us who work with gender minority communities know that mistreatment is all too common. In addition to being a matter of social justice, protecting gender minority communities from mistreatment is a matter of public health. Discrimination is detrimental to the health and wellbeing of our community,” said Dr. Sari Reisner, ScD, transgender health researcher and LifeSkills Investigator at Fenway.

Some of the key findings:

Passage of the Equal Access Bill, currently before the Mass. Legislature, would provide improved access to public accommodations, hopefully leading to better health outcomes. Additionally, training health care providers in transgender and gender-affirmative care and working with employers to update non-discriminations policies to include gender identity and provide sensitive, competent training on how to respectfully interact with transgender co-workers and customers would help address some of these issues.

Project VOICE was generously funded by the Frieda L. Miller Foundation and The Fenway Institute.

The Massachusetts Transgender Political Coalition (MTPC) is a 501(c)(3) organization that works to end discrimination on the basis of gender identity and gender expression. More at www.masstpc.org.

The Fenway Institute at Fenway Health is an interdisciplinary center for research, training, education and policy development focusing on national and international health issues. More at www.thefenwayinstitute.org.