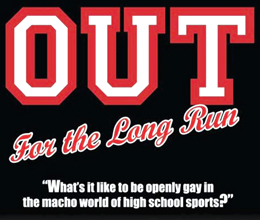 NORTHAMPTON, Mass. — A film that looks at the lives of openly gay high school athletes will make its Western Massachusetts debut on Tuesday April 10 at 7 p.m. at Northampton High School, 380 Elm Street, in Northampton.

Out for the Long Run is an inspirational documentary that demonstrates that even in the world of high school athletics, there’s a place for LGBT youth. The film follows four athletes over their senior year as they navigate the uncertain waters of high school life, while still holding true to their passion for sports and remaining honest about who they are as individuals.

“Talking about gay athletes is still taboo in our world,” said Suzanne Seymour, Executive Director of the LGBT Coalition of Western MA. “It’s one of the places in our culture where people are still uncomfortable, especially men, in coming out. We hope the film helps people to understand that LGBT people are no different, and we need the support of our allies to truly make a difference in how this subject is regarded.”

“This is a very important film for what it can teach us about the negative climate for LGB people in high schools and what LGB people themselves are doing to rise above it,” said Genny Beemyn, Director of the UMass Stonewall Center and a sponsor of the screening. “While anti-LGBT school bullying and harassment have received growing attention in the last couple years, much more needs to be done so that the out individuals profiled in the film are not the exceptions in being successful.”

The event is free and open to the public. It is sponsored by the LGBT Coalition of Western MA, the UMass Stonewall Center, the Northampton High School’s Gay-Straight Alliance and The Rainbow Times.

New Director to Take Over LGBT Coalition of Western Massachusetts