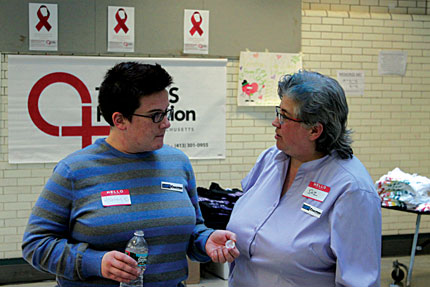 NORTHAMPTON, Mass.—The LGBT Coalition of Western Massachusetts—an organization committed to improving and preserving the well-being of lesbian, gay, bisexual, transgender, and queer identified people of all races and ethnicities—will soon be under new management as Executive Director Suzanne Seymour steps down after leading the nonprofit since 2009, when she acquired it from fore founders Graysen M. Ocasio and Nicole Lashomb.

“The four years I was at the helm of this organization was a gift to me in so many ways,” said Seymour. “It’s time for new, exciting pathways, and it’s important to listen to your own inner voice when it’s time to move in new directions. I’ve listened and it’s been a healthy decision.”

The Coalition serves the LGBT communities of Western Mass. through offering services using innovative advocacy, community outreach programs, and referral services. Their goal is to build stronger communities and families by bridging the gaps that co-exist between members of the LGBT community and mainstream society.

Suzanne said there were many accomplishments during her tenure as director, but if she had to choose one as her proudest, spoke of being part of National GSA Day in Springfield for the last two years.

“Seeing the impact it has made on the kids’ lives we touched by offering that day for recognition of the brave and courageous kids—and adults—that have stepped up to be allies, friends and leaders has been an enormously humbling opportunity for me,” Seymour said. “That was, really, my biggest goal with the Coalition: to give back in such a way so that other young people didn’t have to suffer the way I did regarding my own coming out experience. The teens and administrators I met during GSA Day in Springfield were not the only ones inspired and changed by this experience!”

Seymour said that going forward, she would assist the new director during her interim period in a guiding role as an advisor and hopes to participate in future events. Ashley Mark, director of communications and a member of the board of directors, has been appointed Interim Director of the Coalition.

“Primarily, Suz has acted as a resource for people looking for support, advice, and a voice to advocate for them,” said Mark. “Her programs and events, ranging from GSA Day to Queer Carnevale, Rainbow Riverfest and the Diversity Heroes Project, have helped the LGBT community find a voice, portray a positive image, and combat the hate and ignorance that still permeates society. Suz has been a positive role model for our community, and her vision and passion has guided the Coalition for many years.”

Mark named a number of new projects and directions she hopes to take the Coalition in as director, including moving the Coalition to be an LGBT youth-focused organization.

“Many youth in Western Mass. lack the access to resources and support they need to create safe spaces in their schools, homes, and communities,” Mark said. “A lot of the organizations, support services and resources for LGBT youth are centralized in the Boston area, but the youth here are struggling too, and the Coalition has an opportunity to fill that need. Focusing on LGBT youth does not mean that we are no longer an organization for the greater LGBT community though. The programs we are planning will bring together youth, allies, teachers, parents, and members of the entire LGBT community. In fact, the success of our ideas will be contingent upon the support, involvement and enthusiasm from the whole community.”

Through expanding their GSA Day, establishing an LGBT youth mentoring program, creating a network of Western Mass. GSAs, and working to host the area’s first youth pride parade in 2014, the Coalition aims to meet their goal of becoming more youth-focused. However, Mark said that in order to establish their new programming ideas, their other main focus is funding.

“The Coalition has partnered with local coffee roaster, Gay Coffee, for an internet-based fundraiser that is going on now through December 22,” said Mark. “The funds raised will go toward the transportation for youth to the GSA Day event. We are participating in Valley Gives this year, the online day of giving for the Pioneer Valley. It is our first time participating and we hope it will spread the word of the new work we are doing, cultivate new donors and supporters, and help fund the mentoring program. We will also continue to host our tea dances, a favorite among the LGBT community in the Pioneer Valley.”

In thinking about the most pressing issues facing LGBT people in Western Mass., Mark noted the lack of information about what LGBT youth face in the area, though she said statistics indicate homelessness, suicide, depression, bullying and violence are all problems known to affect LGBT youth.

“I think one of the biggest problems for the LGBT community in Western Mass. is that people see it as a very safe and welcoming place, and that nothing negative ever occurs here,” said Lauren Parker, a new board member with the Coalition and past volunteer. “But in reality, there are still issues the community is facing—bullying in the school systems and even suicide. It is a pronounced problem [and] people seem to make these issues invisible by pretending that Western Mass. is the safest place for LGBT individuals. While it is true that parts of Western Mass. are more supportive than some areas, there is certainly still a lot of work to be done and I believe working with the youth and within the school systems is the best place to start making a difference.”

The Coalition is actively seeking new members for the Board of Directors. For more information and to submit an application, please visit the website at www.lgbtcoalitionwma.org/.