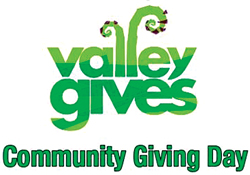 The first 24 hour e-philanthropy event in Western Massachusetts was held by the Community Foundation in partnership with nine leading funding organizations. Valley Gives, an online day of donating to local nonprofits, aimed to reach out in unique ways to donors to invest in organizations that are the fabric of Western Massachusetts, according to information from the Valley Gives online fact sheet.

Caroline Deltoro, Director of Communications for the Community Foundation of Western Massachusetts and Michael Kusek of communication angle explained that the idea for Valley Gives was thought up by two local philanthropists, Al Griggs and Paul Doherty, who were inspired by the Gates Foundation’s Giving Pledge, which asks the wealthy to donate half of their wealth to charity. “The basic idea was to inspire a ‘culture of giving’ throughout the community … we were hoping to encourage everyone, regardless of income, to contribute, to get out a message that philanthropy is not restricted to the wealthy,” said Deltoro and Kusek.

The online event utilized the Razoo Foundation, a 501(c)(3) organization that promotes and provides online charitable giving solutions, to allow visitors to donate to nonprofits throughout Hampden, Hampshire and Franklin counties. Deltoro and Kusek stated that their goal was to raise $1 million, and the event ended up giving $1,174,737 in total to 268 participating organizations and programs.

“It was fun and exciting to see gifts come in from new donors!” said Leslie Tarr Laurie, President and CEO of Tapestry Health. Tapestry Health raised $3,513 and, said Laurie, “hundreds read about our work for the first time. Some may have already known about our more publicized work in women’s health, but not known about our LGBT, HIV and suicide prevention services.”

Wendy Payson, Director of Communications and Community Relations at ServiceNet, Inc., an organization, according to its website, that provides a wide range of human services for people in the Pioneer Valley, said that the day allowed them to raise over $1,800 and gain new supporters.

Payson also said, “Beyond that, we raised significant awareness in the community about the services we provide. We weren’t sure what to expect, and we were pleased with the result.”

Another organization, Family Diversity Projects, a national nonprofit, according to www.familydiv.org, that creates traveling exhibits to help eliminate prejudice and harassment of those who are discriminated against, also benefitted from the day.

“It sounded like a great way to increase awareness of our work, raise funds and help support other Valley nonprofits, too,” said Peggy Gillepsie, Co-Director of Family Diversity Projects, who also donated that day to other area nonprofits. “We feel our local roots, and have done a great deal of our interviewing and photographing for our exhibits, such as Love Makes a Family: Portraits of LGBT People and their Families, locally.” Gillepsie stated that they raised approximately $12,000 and increased their donor base, and the funds will be used for general operational support to make the exhibits accessible to any venue that wants to show them.

All organizations interviewed said that they would absolutely participate again.

Initial feedback was positive, and Deltoro and Kusek said that “nonprofits were very pleased with the day, as it can be a challenge to raise operating support, and this provided an opportunity to be a part of something big and high profile without having to make major investments of time and other resources,” and also that donors “talked about how it was fun and exciting to watch the totals come in throughout the day and to track the progress of their favorite charities.”

Deltoro and Kusek said that Valley Gives will be an annual event, and that their “hope is to build on the success of the first year to raise even more money in subsequent years, as awareness continues to grow.”