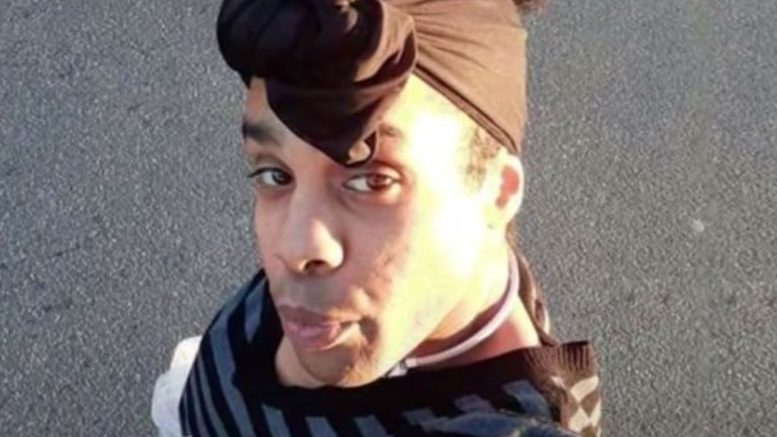 Isaiah Brown, 32, shot by the police 10 times for holding a cell phone and calling 911 for assistance. Photo: YouTube/WUSA9

Isaiah Brown, a Black Gay Man, Was Shot by Sheriff’s Deputy 10 Times After Calling for Assistance

VIRGINIA—The Spotsylvania County Police Department just joined the list of police departments that are under scrutiny because one of their own officers, a sheriff’s deputy, fired on and shot 10 times an unarmed gay man after calling 911 for assistance and declaring he was unarmed, according to the executive director of the National Black Justice Coalition.

“Isaiah Brown should not be hospitalized in critical condition. He should be living his life as he has always lived it – in service to others as an essential worker and health aide,” read a statement by David Johns, executive director of the National Black Justice Coalition, a leading civil rights group. “All reporting indicates that Brown complied with orders, which included raising his arms with his cell phone in hand, and informing the 911 dispatcher he was unarmed ahead of police arrival.”

Isaiah L. Brown, 32, is in the Intensive care unit, fighting for his life. Only 2 bullets were removed from his body, at the time of this story breaking. His family and many around the country are outraged and there are Black Lives Matter protests ongoing due to yet another black man being killed by police in another part of the country and a week after another former officer, Derek Chauvin, was convicted for the murder of George Floyd in Minneapolis, Minnesota.

“After viewing the Spotsylvania County sheriff’s deputy’s bodycam video and listening to the 911 call, it is evident that the tragic shooting of Isaiah Brown was completely avoidable. Isaiah clearly told dispatch that he did not have a weapon more than 90 seconds before the deputy arrived. He told dispatch that he was walking away from the house and away from anyone else and was on the roadway by himself. Isaiah was on the phone with 911 at the time of the shooting and the officer mistook a cordless house phone for a gun,” Brown family attorney David Haynes said in a statement.

And Brown is an essential worker and a man who also belongs to the LGBTQ+ community.

“Isaiah’s Black and gay/same gender loving identity will likely make it more difficult for his family to attain accountability for the officer responsible,” Johns’ statement added. “Still, Black LGBTQ+ people continue to die by violence, often unreported, perpetrated by police officers and other state-sanctioned actors who do not value Black Lives Matter.

“We echo the Brown family’s demands that all audio recordings associated with this shooting be released to the public. Additionally, that the police officer in question, who made careless and basic errors while violating police protocols, should be held accountable. We will continue to advance efforts that aim to reform national policy in an attempt to prevent this from happening to another member of our community again.”

Haynes also said the deputy “made multiple, basic policing errors and violated established protocols” during the incident. “The deputy was situated nearly 50 feet from Isaiah, was never threatened, and should not have discharged his weapon.”

To do something to ensure that these crimes don’t go unpunished, call your Senators to sign the George Floyd Justice in Policing Act.

This story continues to unfold. Come back for more details. More reactions from the Internet below.

Bakari Sellers: “I want everyone here to take out your phones and Google the numbers for Kyrsten Sinema and Joe Manchin and ask them why they haven’t signed on to the George Floyd Justice in Policing Act.”#IsaiahBrown pic.twitter.com/U5Ti8N8kyq

Imagine being on the phone.

While the police shoot you.

For being one the phone

This is why those "heartwarming" "good cop" stories don't mean shit. The same cop who gave him a ride home shot him 10 times. #IsaiahBrown https://t.co/sS1sdp3J05

Listen how many times the cop wildly screams "drop the gun" over and over, before shooting #IsaiahBrown.

Isaiah was holding his phone to his ear. He was on the phone with a 911 dispatcher [the officer's law enforcement colleague]