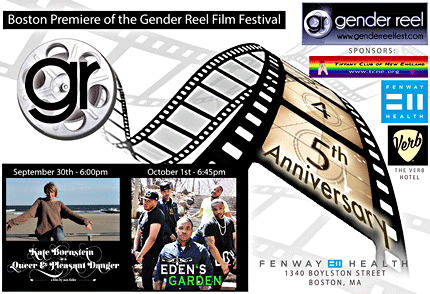 BOSTON, Mass.—Gender Reel, a national traveling film and art festival, is coming to Boston for the very first time with two free nights of films that celebrate gender variant and transgender lives and experiences.

The opening evening of the festival will feature Kate Bornstein is a Queer & Pleasant Danger, a documentary exploring the life of Kate Bornstein, followed by a Q&A with director Sam Feder. Closing night will be the world premiere of Eden’s Garden, a series exploring the lives of Black and Latino trans men, followed by a discussion with series creator Seven King. Both nights are free and open to the public, but attendees are encouraged to register in advance to secure a seat.

Attendees can register for free for both nights at Brown Paper Tickets: brownpapertickets.com/event/2222553

More information about Gender Reel, including the premiere Boston Festival, can be found at http://genderreelfest.com. Updates regarding Gender Reel Boston can also be found on Facebook at Gender Reel Film Festival – Boston.