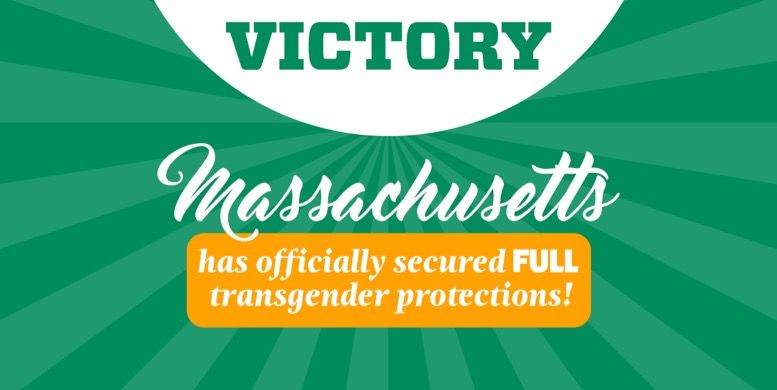 History was made today, when after much debate and legislative work, the transgender rights bill was finally signed by Mass. Republican governor, Charlie Baker

Kasey Suffredini and Mason Dunn, Co-Chairs of Freedom Massachusetts, the bipartisan campaign that led the efforts to make this legislation the law of the Commonwealth, today released the following statements:

“Let there be no doubt that today history was made in Massachusetts. The enactment of this law comes after ten long years of transgender people summoning the courage to step out the shadows to publicly advocate for their civil rights,” said Kasey Suffredini, Co-Chair of Freedom Massachusetts. “While we did so proudly, it should not be forgotten that many did so at great personal risk of losing a job, a friend, or ties with family. This is a victory for those brave people and indeed a victory for Massachusetts.”

“Our work has helped people understand what it means to be transgender and that basic protections of law should be afforded to all people,” said Mason Dunn, Co-Chair of Freedom Massachusetts. “Today, Massachusetts sends a powerful message to the nation that politics need not play a role in the pursuit of equality for all Americans. We have shown beyond a doubt that LGTBQ rights are human rights and that transgender equality and justice for all is of concern for everyone, no matter political affiliation.”

The legislation passed the house and the senate with an emergency preamble provision that instructs the law to be enacted on October 1, 2016.

AIDS Action Committee Executive Director Carl Sciortino, who originally filed the bill in 2011 when he was a state representative, released the following statement in response:

“AIDS Action applauds Governor Baker for signing this bill into law. We also applaud the legislative champions who pushed this bill along. But we are most grateful to the many transgender residents of the Commonwealth, and their families, for sharing deeply personal stories with the public about what it is like to live without basic civil rights protections. I am honored to have been in a position to back this bill as a lawmaker, and I’m proud to have continued that advocacy with AIDS Action, which belonged to the coalition of social justice, healthcare, and business organizations that supported this bill.

“Experiencing routine stigma and discrimination is closely related to poorer health outcomes, and it’s one of the reasons why transgender people have higher rates of HIV than the general population. Indeed, in just two weeks, the International AIDS Conference will convene in Durban. The theme of this year’s conference is how to increase access to equity, because it is indisputable that full human rights for all those vulnerable to HIV infection, including transgender people, is necessary for ending AIDS. Here in Massachusetts, implementation of this law will be a very important step toward that goal.”

“We applaud Governor Baker for signing the transgender anti-discrimination bill into law. This marks an important moment in the Commonwealth. Everyone, regardless of their gender identity, deserves full and fair protection from discrimination. The benefits of being able to exercise civil rights in public spaces such as restaurants, hospitals, and public transit impact an individual’s ability to work, to participate in community life, and even their ability to manage their health. As research from The Fenway Institute has shown, discrimination against transgender people in public spaces is associated with an increased risk of symptoms of poor health, as well as an increased likelihood to postpone or not seek needed care when sick or injured. It is increasingly clear that good public health is closely connected with the ability to live free from stigma and discrimination. The implementation of this law will mark an important step forward in achieving that goal.”

[From a Compilation of News Releases]

Via Twitter, reactions to the bill’s signature and gratitude to the Governor poured the social media because of the #TransBillMA news.

Thank you @MassGovernor for signing the #TransBillMA. We are stronger when we all have equal protection from discrimination.

Today is a huge victory for our transgender friends, family & neighbors. Together we made #EveryoneWelcome in Massachusetts. #TransBillMA