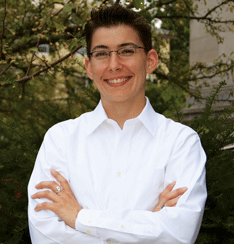 Kara Coredini will soon step down from her ED position at MassEquality.
Photo by: MassEquality

This weekend, Boston will celebrate its 42nd Pride March. It’s hard to believe that in just two generations Pride has evolved from an event that saw many of its first participants march with paper bags over their heads to protect their anonymity into one of the city’s largest annual celebrations led by the Mayor of Boston, the Governor of the Commonwealth, and tens of thousands of marchers and onlookers.

We have seen similarly remarkable progress in our quest for full equality. In just a few weeks, on July 1, the Transgender Equal Rights Bill passed by lawmakers late last year and signed by Gov. Deval Patrick, will take effect. No longer will transgender residents of Massachusetts have to fear that they can be fired simply for who they are. And they will no longer have to fear that they can be subjected to unequal treatment in housing, credit, or schools.

Even as we mark these successes, however, we know that much work remains. The Transgender Equal Rights Bill does not protect transgender residents in public accommodations, such as restaurants, gas stations, public transportation, or banks. Our schools need to be made safer for LGBT students. We must end the epidemic of homelessness among LGBT teens and young adults. We must ensure that LGBT elders can age with dignity. We must end the epidemic of HIV infection among gay and bisexual men and transgender women, who are much more vulnerable to HIV than the general population. And we must continue collaborating with social justice organizations to lift up all of our vulnerable communities in the Commonwealth.

On Friday at the Dyke March and Saturday at Boston Pride, we will be celebrating our accomplishments as well as our enduring commitment to the work that remains. We extend a hearty welcome to every member of the community to march with us. On Friday, we will gather near the Parkman Bandstand on Boston Common at 6 p.m. before the Dyke March. On Saturday, we will gather outside the Boston Public Library at 11 a.m. and line up to march at 11:30. We hope to see you there!

*Kara Suffredini, Esq. is the executive director of MassEquality.