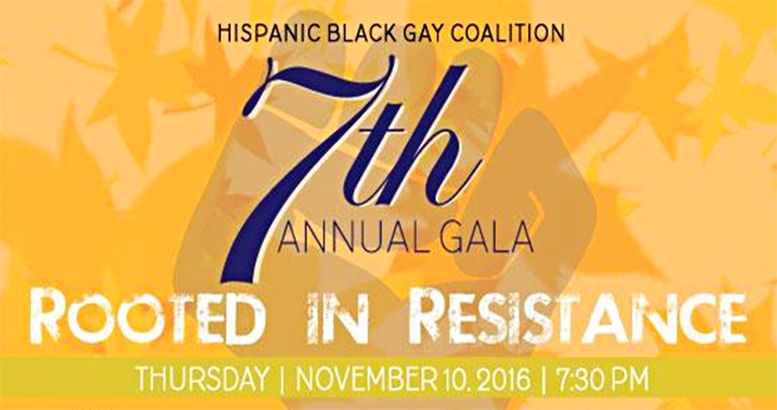 BOSTON—On Thursday, November 10, the Hispanic Black Gay Coalition (HBGC) will host its 7th Annual Gala: Rooted in Resistance from 7:30 p.m. to midnight at the Multicultural Arts Center located at 41 Second Street in Cambridge. The event, which commemorates HBGC’s founding in the fall of 2009 by Corey Yarbrough and Quincey J. Roberts, Sr., will offer members of the Black and Latinx LGBTQ community and their allies an opportunity to gather to reflect and call upon the inspiration and critical need for queer radical movements led by people of color— past, present, and future. Just two days after the U.S. presidential election, this celebration will give intentional space and voice to a perspective conspicuously absent during the campaign season by honoring two radical black feminists.

Receiving the James Earl Hardy Legend Award, which recognizes a trendsetting activist who has impacted LGBTQ communities of color for more than 10 years, will be Demita Frazier, a lawyer and activist who was a founding member of the Combahee River Collective. Frazier has been a student of and active in social justice work since her high school years in Chicago in the 1960s.

Daunasia Yancey, a Boston native currently living in Pittsburgh, will receive the Audre Lorde Founders’ Award, dedicated to an up-and-coming activist who has taken initiative to create change in LGBTQ communities of color. Like Frazier, Yancey began her work as an activist at a young age, working for organizations like the Boston Alliance of GLBT Youth (BAGLY) and Boston LGBT Adolescent Social Services (GLASS) as a teenager before founding Black Lives Matter Boston in 2014. In addition, HBGC will announce the winner of the Sylvia Rivera Community Award, which was determined by community voting during the month of October. This award honors a local organization, group, or business that has supported the mission of HBGC while doing its own work that improves the lives of LGBTQ individuals of color. This year’s nominees include The City School, Connected Boston, The Foundation Movement, and The Rainbow Times.

Tickets can be purchased online at https://goo.gl/mHppWK. General admission tickets are $65 in advance and sustainer (VIP) tickets, which include an open bar reception, are available for $100. Reserved table seating for 10 people is available for $850 by e-mailing info@hbgc-boston.org. The VIP reception will start at 7:00 p.m. and the general door opens at 7:30 p.m. There will be a cash bar and hors d’oeuvres beginning at 8:00 p.m., with the program beginning at 8:30 p.m. At the conclusion of the program, there will be dancing from 10:00 p.m. to midnight.

The Hispanic Black Gay Coalition (HBGC) is one of few non-profit organizations in Boston dedicated to the unique and complex needs of the Black and Latinx LGBTQ community. Founded in 2009, we work to inspire and empower Black and Latinx LGBTQ identified individuals to improve their livelihood through activism, education, community outreach, and counseling.