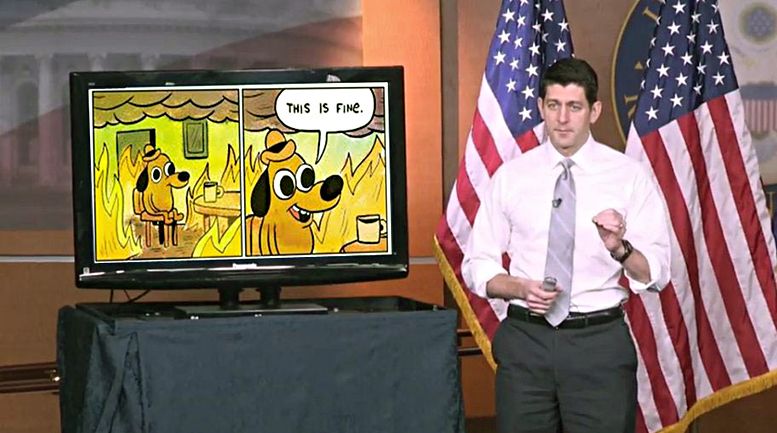 Images from GOP House Speaker Paul Ryan's press conference to explain his bill to replace Obamacare were quickly turned into memes mocking his efforts. Health advocates say that the bill would have dramatically reduced access to care for LGBT people, Black and Latino Americans, and those living with HIV.

Obamacare could still be on the chopping block

Now that Congress is no longer considering the American Health Care Act (AHCA), a bill filed by House Speaker Paul Ryan to replace the Affordable Care Act (ACA), the future of efforts to repeal and replace the ACA, also known as Obamacare, are unclear. What is clear, as a policy brief by The Fenway Institute on the AHCA explained, is that the AHCA would have harmed LGBT people, persons living with HIV, and Black and Latino Americans.

“This bill holds potentially devastating consequences for low-income LGBT people, people living with HIV, and Black and Latino people,” according to Sean Cahill, director of health policy research for The Fenway Institute. “The rates of uninsurance among LGBT people and people living with HIV have dropped dramatically since 2013, when the Affordable Care Act’s Medicaid expansion was implemented. While people of all races benefitted from the expansion of insurance access, on a per capita basis Black and Latino people benefitted disproportionately. Those gains could be completely erased if this bill becomes law.”

Although Obamacare remains in place for now, the President, Congress, and federal agencies can choose whether to take action to stabilize and strengthen the program or to undermine it either through direct action or inaction. In an article on March 27, Vox.com’s health policy reporter Sarah Kliff highlighted several decisions the Trump administration will make that affect the future of Obamacare and the U.S. health care system. These include:

Some Congressional Democrats have indicated they are willing to work with the Republican majority and President Trump to safeguard Obamacare’s gains and fix its problems. Speaking on ABC’s This Week, U.S. Senate minority leader Chuck Schumer said, “We Democrats, provided our Republican colleagues drop [repeal and replace] and stop undermining the ACA, are willing to work with our Republican friends—as long as they say no more repeal.” Schumer also noted that, “We have ideas, they have ideas to try to improve Obamacare. We never said it was perfect. We always said we’d work with them to improve it—we just said repeal was off the table.”

The Trump administration’s “America First” budget blueprint for fiscal year 2018 (FY18), released on March 16, would increase defense spending $54 billion, but would impose deep budget cuts to many federal agencies and programs, including the Department of Health and Human Services (HHS), the Environmental Protection Agency (EPA), and the State Department. Funding for HHS would be reduced approximately 18%, from $84.1 billion in FY17 to $69.0 billion in FY18. The budget blueprint says these changes would be achieved by eliminating “programs that are duplicative or have limited impact on public health and well-being. The Budget allows HHS to continue to support priority activities that reflect a new and sustainable approach to long-term fiscal stability across the Federal Government.”

Included in the HHS budget cuts are:

Shortly after the budget blueprint was released, five HIV/AIDS and STD organizations issued a joint statement that was largely critical of the proposal. Noting that the blueprint “severely cuts funding to agencies responsible for protecting the public health and responding to infectious diseases, including HIV,” the statement called on the U.S. Congress to reject the budget and ensure that funding for non-defense discretionary programs is maintained. The five groups issuing the joint statement are: AIDS United, the National Alliance of State and Territorial AIDS Directors, the National Coalition of STD Directors, NMAC, and The AIDS Institute.

“We appreciate that the administration recognizes the importance of the Ryan White providers, other safety-net providers, and global health, including PEPFAR [President’s Emergency Plan for AIDS Relief],” commented Michael Ruppal, Executive Director of The AIDS Institute. “However the cuts to the National Institutes of Health, Department of Housing and Urban Development, and other parts of HHS, including public health infrastructure, will reverse our progress on ending the HIV epidemic. If enacted, the budget would be devastating to our nation’s public health infrastructure and would harm people living with and/or at risk for HIV and STDs. HIV and STD programs are critical to the public health of our nation and must not be cut.”

The fifth annual National Youth HIV and AIDS Awareness Day (NYHAAD) is being observed this year on Monday, April 10. Many national, state, and private organizations are partners or supporters of NYHAAD. The day’s founding partners include: Advocates for Youth; AIDS Alliance for Children, Youth, and Families; AIDS United; National Alliance of State and Territorial AIDS Directors; National Coalition of STD Directors; NMAC; and Sexuality Information and Education Council of the United States.

According to Advocates for Youth, the establishment of NYHAAD is a step toward acknowledging and addressing the needs of young people in the HIV and AIDS response. Each year, young activists in high schools and at colleges and universities across the country use the day to organize and educate about HIV and AIDS. They promote HIV testing, fight stigma, and start the necessary conversations to deal honestly and effectively with the challenges of fighting HIV/AIDS among youth.

To support activities commemorating NYHAAD, we have compiled an annotated list of online resources focusing on HIV/AIDS among children, adolescents, and young adults.

Fact Sheets from Advocates for Youth

The second annual National Transgender HIV Testing Day (NTHTD) will be observed on Tuesday, April 18. The event is being organized by the University of California-San Francisco’s Center of Excellence for Transgender Health (CoE). According to the CoE, “NTHTD is a day to recognize the importance of routine HIV testing, status awareness, and continued focus on HIV prevention and treatment efforts among transgender people. This initiative encourages community-based organizations, health jurisdictions, and HIV prevention programs to participate by hosting local trans HIV testing community events (HIV testing, visibility campaign, community forums) and/or develop trans-specific HIV testing campaign materials and resources.”

As part of the NTHTD initiative, the CoE has developed a Transgender HIV Testing Toolkit, which includes five modules “designed to reflect the most current HIV prevention research and best practices for serving trans and gender non-binary people.” The modules are: 1) Get the Facts about Trans People and HIV; 2) Testing and Enhanced Communication Approaches with Trans People; 3) Building Capacity to Increase HIV Testing Efforts for Trans People; 4) Community Engagement and National HIV Transgender HIV Testing Day; and 5) NTHTD and Toolkit Resources. The CoE has also produced a number of other resources for the testing day, including a condensed toolkit for health departments, testing placards in English and Spanish, and a series of flyers to promote testing.

To support activities commemorating NTHTD, we have compiled an annotated list of online resources focusing on HIV/AIDS among transgender people.

Services and Advocacy for Gay, Lesbian, Bisexual, and Transgender Elders (SAGE) – Organization that provides services and advocacy for LGBT elders

LGBT Education and Training – Resource with a list of articles, training, and educational materials from the LGBT Resource Center at UCSF

All Children-All Families: Benchmarks of LGBTQ Cultural Competency – from the Human Rights Campaign