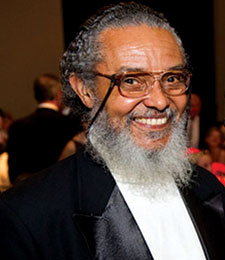 BOSTON, Mass.—For five years now, a Boston-based, all volunteer nonprofit has honored individuals and organizations for their history-making contributions to the LGBT community. This year, The History Project will present two awards: the Honorable Byron Rushing of the Massachusetts House of Representatives will receive the HistoryMaker Award; and Omar Thomas, a musician, the Lavender Rhino Award.

In choosing Rushing for the honors, The History Project also pointed to his work in local history, from service as president of the Museum of African American History and his role in the restoration of the African Meeting House, to his work with the Roxbury Historical Society.

Altogether, “The amazing strides that New England’s LGBT community has made in recent decades, which The History Project documents and preserves, would not have been achieved without the contributions of inspiring allies like Byron Rushing,” said Neal Kane, History Project chair. “We are extremely pleased and proud to have Byron join the ranks of outstanding community leaders.”

“His name kept coming up over and over since 2009 when we were first talking about the award,” said Andrew Elder, History Project archivist and board member. “A lot of people involved with the organization over the years had worked with Rushing and were involved in activism with him. Since his name kept coming up, we felt it was time to honor him with the HistoryMaker Award.”

Because The History Project is committed to local history even beyond the LGBT community, Rushing “seemed like a perfect fit,” Elder added.

In choosing Omar Thomas, a noted jazz musician, for the 2014 Lavender Rhino Award, Elder said, “Artists are rarely recognized for their contributions in making LGBT history.”

Thomas, 30, an educator, arranger, and award-winning composer, was appointed to the position of Assistant Professor of Harmony at Berklee College of Music at the age of 23.

An active member of the Berklee community, he serves on the Diversity and Inclusion Council, the Comprehensive Enrollment Strategy Workgroup, and as co-chair of the LGBT Allies. In 2012, the Boston Music Awards named Thomas “Jazz Artist of the Year.” Thomas’ music is described by critics as “elegant, beautiful, sophisticated, intense, and crystal clear in emotional intent.”

One of Thomas’ more recent works is “We Will Know: An LGBT Civil Rights Piece in Four Movements.” One of the four movements, “Hymn,” deliberately borrows from the African American civil rights anthem “We Shall Overcome,” but this time in the context of the LGBT struggle.

“The beauty and madness of this work is that it is a composition based on juxtaposition, promoting a social movement written in a genre (jazz) pioneered by a group that historically has an aversion to the group for which the piece is created,” said Thomas, referring to the conflict within the black community over homosexuality. “Though it is written in solidarity with the LGBT movement, it is anchored by styles and songs created by and for the African American experience.”

Previous Lavender Rhino Award recipients are Robbie Samuels, Spectra Adaora Asala, Maggie Cee, and Chris Mason. [pullquote]One of Thomas’ more recent works is “We Will Know: An LGBT Civil Rights Piece in Four Movements.” One of the four movements, “Hymn,” deliberately borrows from the African American civil rights anthem “We Shall Overcome,” but this time in the context of the LGBT struggle.[/pullquote]

This year’s awards ceremony and fundraising event, held Thursday, October 2 from 6 to 9 p.m. at Club Café, marks a change of venue from years past when the Goethe-Institut and Boston Athenæum served as locations.

“We’re excited about holding the awards ceremony at Club Café,” said Elder, referring to the South End eatery and nightspot for LGBTs. “With fewer gay bars and LGBT public spaces, we like the idea of going back into the community.”

The History Project’s mission is to research, document, restore, and preserve the history of Boston and Massachusetts LGBT communities, and to share that information with LGBT organizations, individuals, allies, and the public. Established in 1980 by a group of historians, activists and archivists, the organization is the only one focused exclusively on preserving the history of the local and statewide LGBT community, and on making that history accessible to future generations.

For more information on The History Project, visit www.historyproject.org.