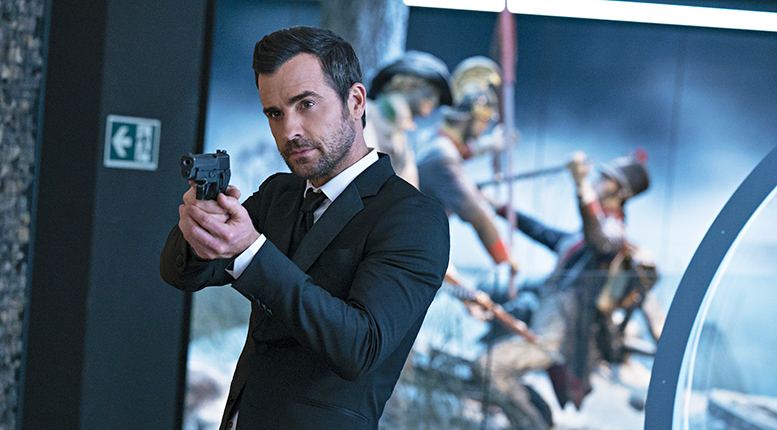 Justin Theroux as "Drew" in THE SPY WHO DUMPED ME.

When not fashioning crop tops for gay guys, Justin Theroux is the spy you wouldn’t mind being dumped by

No straight man has ever offered to make me a crop top, but Justin Theroux is no ordinary straight man. If you’ve seen him in all his shirtless, ripped, oiled glory in 2003’s Charlie’s Angels: Full Throttle or bore witness to all that was bouncing around in his grey sweatpants in HBO’s The Leftovers (I know you saw that; you haven’t stopped seeing that), you have likely wished him gay.

The vers 46-year-old actor is, at least, the closest a straight man can get to being gay, palling around with the new Queer Eye posse and portraying a deep well of gay characters during his two-decade career, from Marshall in 2000’s The Broken Hearts Club to an assortment of gay Englishmen in numerous New York theater productions. Significant gay cred aside, his acting instincts have resulted in an impressive mix of unpredictable career choices rooted in pathos and humor, David Lynchian mystery and Herculean ruggedness: from 1997’s Romy and Michele’s High School Reunion on through Mulholland Drive, Strangers with Candy, Sex and the City, Zoolander and, most recently, The Spy Who Dumped Me. Directed by Susanna Fogel, the action-comedy caper stars Theroux as Drew, an on-the-run spy who inadvertently gets his ex (Mila Kunis) and her best gal pal (Kate McKinnon) embroiled in his messy assassin-fighting mission.

Things are tamer in a hotel suite in New York City on the day Theroux sits across from me with his rescue pit bull Kuma. Theroux – imagine if he dumped you; what an honor – is not wearing sweatpants. But my mock disappointment isn’t sweatpants-related; it’s knowing that he made Queer Eye guy Jonathan Van Ness a crop top but didn’t bring me one. And do I let Justin Theroux wreck the shirt on my back? I do, right? “I would so do it,” he politely insists. “If you have a t-shirt and a pair of scissors, I’m happy to quickly fashion you one.”

Q: Let’s talk about how you invented sweatpants.

A: (Laughs) I invented the grey sweatpants! I brought them back, I know! You know, I was the one who made a shirt for Jonathan. We were going to gay Pride and he was like, “F@ck, I gotta go out,” and so I made him a shirt. I was like, “I wanna make one of those crop top t-shirts with the tassels,” and he ended up wearing that.

Q: Do you regularly make crop tops for your gay friends?

A: No, that was the first one I’ve done. It was just like, “It’s a perfect moment in time. I’m with Jonathan and I have a t-shirt and we have scissors and I think I could pull it off.”

We’ve become a good little clutch. Tan, Antoni and Jonathan have come over a bunch of times and we’ve gone back and forth, and I’ve disappeared into the bathroom with Jonathan and we’ve talked products.

Q: Can a straight guy have a queer eye?

A: Keeping my fingers crossed. Season 3! Maybe we should do a whole thing where it’s like, “Straight Eye for the Gay Guy.” Find some gay guy who’s not got his shit together and I can go and help him out. I don’t know if I’d be that helpful.

Q: I must say, you’ve got your shit together.

A: I put a little effort in sometimes. (Queer Eye guy) Tan’s trying to get me to wear some color. I’m pretty much blacks and greys. White is technically a color for me.

Q: We need to get you in floral.

A: I don’t think it’s gonna happen! I just can’t pull it off. I keep looking for a Hawaiian shirt that’s 95 percent black with just a little pop of color in the flowers.

Q: Recently, Jonathan was obsessing over your shirtlessness in Charlie’s Angels. Is that the role most gay men fangirl over when they meet you?

A: I mean, the first one was actually The Broken Hearts Club, which was a movie I did years and years ago. I remember being at gay Pride and people being like, “Oh my god, this is the guy from Broken Hearts Club!” (Playing gay) was kind of my bread and butter in New York on stage. I would do Joe Orton plays, or Shopping and Fu@king. I’d do all these gay Englishmen. That was my thing, that was my calling card.

Q: Why go for the gay roles?

A: It was something that just happened. It wasn’t like I was seeking them out. It was just something that presented itself. At the time, there was that kind of question when you’d go into the audition: “Are you comfortable kissing a guy?” “Yeah, of course.”

Q: In 2000, some actors were being told not to play gay characters for the sake of preserving their careers. Was there any pressure on you not to play that role?

A: No. My agent at the time was gay, so it was never a discussion. It always boils down to, is the part good or is the play good? If the material is good, I’m happy to do it. If it’s bad, then I don’t wanna do it. But I wouldn’t want to do it for a straight part either.

Q: Did it feel like an important movie at the time for the LGBTQ community?

A: It didn’t, because it’s not necessarily my community. But it was one of those I was happy (about). It was the first (LGBTQ) movie that showed – at least that I had been a part of, or had seen – just a normal relationship. No one’s dying of a disease, no one’s fighting with their parents. It felt like a great episode of Thirtysomething or a great episode of This Is Us. (Its gay themes were) just built into the fabric of the movie, as opposed to being the fabric of the movie. There weren’t big red arrows pointing at each character going, “Oh, and by the way, they’re gay!” They were functioning, normal people in their lives, which is the reality. In a weird way, it’s normalcy was the thing that made it special and that felt like a good reason to do it.

Q: Growing up in Washington D.C., what was your introduction to the LGBTQ community?

A: God, you could argue it was probably Catholic school and noticing the priests. Not their behavior; I didn’t think anything nefarious was going on. I don’t think they were doing anything horrible to the boys of the school, but I remember thinking, “These men seem effeminate and they carry themselves in a different way, and I think these guys like other men, like other gay men I’ve seen.”

A: Yeah, exactly. And it was an odd kind of thing, where I thought, “Oh.” I’ve since come to think maybe the priesthood is like an enclave for people who aren’t comfortable with their sexuality and they wanna shut it down and they think, “Please make it go away. I’m just gonna go to this place and go to seminary school and hope that this feeling leaves me,” which is a shame.

Q: You strike me as the kind of guy who’s surrounded by gay men for various reasons.

A: Yeah, of course. I went to a very progressive high school that had gay boys in it. In college, it becomes quickly normalized. But you can’t live in New York and not be friends with every kind of person, whether they’re gay, trans, straight, whatever. When this sort of cultural shift started to happen, started to spread into the middle of the country in a way that became in the public consciousness…

Q: You were ahead of the game?

Well, I think most people in the city or in pockets of the country were kind of ahead of the game. It felt like, “Wait, this conversation is still happening? Oh yeah, I guess it still is. I guess we do need to keep having this discussion.” (I) marvel at people who are still made uncomfortable by it. Like, how on earth? It’s like being made uncomfortable by a sofa; you’re like, “It’s a sofa.” It couldn’t be more normal.

Q: You should know that you’ve been called a “gay men’s dream” by the National Enquirer, probably their most accurate reporting.

Q: So this movie: Was the title The Spy Who Dumped On Me ever considered?

A: (Laughs) It’s the James Bond they never made! Idris Elba, Daniel Craig, why wouldn’t you do that movie?

Q: Susanna’s friends call her the “lesbian whisperer.” And, of course, Kate McKinnon is queer and one of two leading ladies in this film.

Q: Did you get a lesbian read on Kate McKinnon’s character, Morgan, in the movie?

A: Yeah. But what I liked about her character: again, it wasn’t the focal (point). It’s kind of ambiguous. What she brought to the part was super hilarious. She works really hard on specific jokes, beats, alternate lines, trying to come up with other stuff that isn’t necessarily on the page or in the direction. Kate really goes in and scribbles on the sides (of her script) and it looks like A Beautiful Mind on her script. She approaches her work (in) really sort of (an) academic way.

A: What’s the last one I’ve done? Maybe (my character) Kevin Garvey from The Leftovers is, who knows. Don’t tell anybody. No, I’m joking. (Laughs) You could argue he was really put-upon and maybe that was the reason why, ’cause he was in a hetero marriage.

Q: What would you look for in a gay role now?

Q: If you were to date any of the guys you have played in your career, which ones might you go for? Personally, I’d shack up with Joe from Six Feet Under.

A: Joe in Six Feet Under was a sweetheart. But if I dated Joe, he was straight, and so I think that would problematic.

Q: He’s only straight till he drinks four beers.

A: Until he drinks four beers, then all bets are off! The bondage gear comes out. Like, we all know Joe liked being tied to the bed. (Laughs) I don’t know if there’s anyone I’d really wanna date. And it’s weird to think about dating yourself. Just visually awkward.

Actually, Matt McGrath’s Broken Hearts character was an adorable character. But I don’t know, I played some pretty fu@ked up guys, so they all seem like they’re not great relationship material.

*As editor of Q Syndicate, the international LGBTQ wire service, Chris Azzopardi has interviewed a multitude of superstars, including Meryl Streep, Mariah Carey, and Beyoncé. Reach him via his website at www.chris-azzopardi.com and on Twitter (@chrisazzopardi).