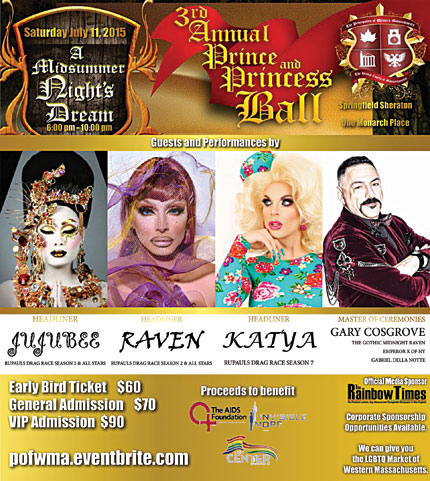 “We are thrilled to be able to have such amazing talent again appearing at the 3rd Annual Prince and Princess Ball,” said Nelson Roman, Board President. “Our Theme A Mid Summer Nights Dream, will transform downtown Springfield into a land of fantasy.”

The Community Service Diamond Award, OUTstanding Business/Professional Awards, and the Positive Force Award will also be presented to honorees.

Over the past three years, the Principality has raised over $30K for LGBTQA, HIV/AIDS and youth enrichment organizations. The Imperial Crown Prince and Princess Ball is more than just a dazzling display of regal glamour, it is an opportunity to celebrate the LGBTQA community, and in particular, the colorful cross-dressing performers of the community.

“As always, it is important that we continue to raise funds for our community,” Roman said. “Our organization continues to make a difference in fighting homophobia, HIV/AIDS and other social injustices, while empowering youth who are our next leaders.”

This year’s beneficiaries include the AIDS Foundation of Western Mass., Invisible No More, and the LGBT Center of Springfield. More than 200 guests attend the local red carpet-black tie gala from all over the United States, Canada and Mexico.

The Imperial Court of Western Mass Inc., is a 501(c)3 organization, and is Western Massachusetts’s most regal fundraising organization serving the LGBTQA com- munity. The Court has raised thousands of dollars for charitable organizations including, Springfield Mass Pride, Northampton Pride and Diversity, Service Members United, The Bing Arts Center, the Holyoke Equal Rights Association, the LGBT Center of Springfield, Out Now of Springfield, and the AIDS Foundation of Western Mass. For more information, please visit www.pofwma.org.