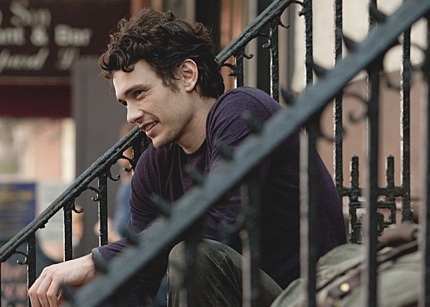 If you’re a film festival nerd or just really into arty-dirty stuff like BUTT Magazine, you probably saw or at least heard about I Want Your Love, the indie movie from director Travis Mathews that featured actors having real sex on camera. If not, it’s still making the festival rounds, so you have time to catch up before Mathews’ latest effort makes waves. And it will make waves. He’s teamed up with actor/art-star/overachiever James Franco for James Franco’s Cruising. What’s it about? Well, when William Friedkin (The Exorcist) directed the highly controversial Cruising in 1980 – in which Al Pacino played an undercover detective in the gay leather world – Warner Bros. made him cut about 40 minutes to satisfy the MPAA and receive an “R” rather than “X” rating. That footage, now destroyed, forms the basis for this film’s plot. Not a remake, not a sequel, instead it will be a highly speculative exploration of what might have been. And it’ll give Franco yet another opportunity to be conceptually gay-for-pay, just the way we like him.

After the success of Hot in Cleveland – and what with the whole post-Bridesmaids film culture we’re living in now, one where Hollywood has finally started waking up to the fact that half of the ticket-buying public is female – it was only a matter of time before women of a certain age got their shot at big screen ensemble comedy. Coming soon, then, is The Hot Flashes (this type of joke will get stale quickly, but for now we’ll allow it) from director Susan Seidelman (Desperately Seeking Susan) and starring a roster of big lady-names like Wanda Sykes, Brooke Shields and Virginia Madsen. The plot involves a Texas basketball team of former high school champs who take on a girls’ state-champ team in a series of breast cancer prevention fundraising games. Camryn Manheim and Daryl Hannah round out the line-up. There’ll probably be some men in it, too, but do you care who? Didn’t think so. There’s no official release date yet, but you can friend the movie on Facebook if you want, where it is unlikely it will annoy you with lots of political posts about the election.

Neil Patrick Harris making movies he can take his kids to

Even in liberal Hollywood, it’s highly unlikely that an actor whose career involves playing a coarse womanizer on a popular sitcom and making incredibly raunchy hay of his off-screen sexuality in a series of marijuana-themed comedies would allow his preschool aged children to watch him on the job. That’s why it’s no big surprise to see Neil Patrick Harris take on back-to-back roles in upcoming kid-themed projects. Currently he’s starring in a pair of franchise-builders, as a voice (alongside Anna Faris and Andy Samberg) in Cloudy 2: Revenge of The Leftovers, the sequel to the animated hit Cloudy With A Chance of Meatballs, and on the days when he actually has to go in to hair and makeup, he’s shooting the inevitable Smurfs 2 opposite a green screen that’ll eventually be populated with more tiny blue creatures. It’s a living. It’s also a kid-friendly way to introduce the idea that dad isn’t just the guy who persuades you to eat your vegetables; he’s also a celebrity, which is why you’ve got your own room, a nanny and a swimming pool.

After years of frenzied speculation, Lana Wachowski – formerly known as Larry – finally spoke about her life in transition. She took the opportunity afforded her by the recent Toronto International Film Festival premiere of the Tom Hank-starring Cloud Atlas to finally address the topic (non-shocker: being famous can be a burden and she didn’t want the press breathing down her neck about it) and did so with the same Matrix-level of coolness fans of the Wachowskis’ work have come to expect. Don’t expect to see her on the talk show circuit with a memoir or on Dancing With The Stars anytime soon (not that there’s anything wrong with that, Chaz-o-philes) but do expect increased movie output from the famous filmmaking siblings. Coming in 2014 is the sci-fi thriller Jupiter Ascending, starring the now-ubiquitous Channing Tatum and Mila Kunis. And when that memoir finally does arrive some day (in 2044 or whenever) you know it’ll be jaw-dropping.

* Romeo San Vicente is frequently the cause of dropped jaws. He can be reached care of this publication or at DeepInsideHollywood@qsyndicate.com.