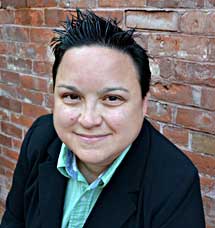 HOLYOKE, Mass. – A local resident of Holyoke and a fierce supporter of Alex Morse’s platform during the Holyoke Mayoral Campaign 2011, Jossie Valentin has decided to take on Holyoke, Massachusetts’ Ward 4. As a Hispanic from 25 Linden St., Valentin took out nomination papers in May 2013 to run for Ward 4 City Councilor.

“I was involved with Alex Morse’s mayoral campaign two years ago, and was quite inspired by what I saw and heard from Holyokers,” Valentin said proudly. “I want to be a part of the positive changes that this city is experiencing and be a voice for our community.”

Valentin, who is originally from Puerto Rico, came to Massachusetts in 1998 to attend graduate school and never left. She has been a Holyoke resident since 2005. “Massachusetts is a great state” said Valentin, “and I am proud to be a resident of Holyoke.”

“We truly appreciate the efforts of the Holyoke Police Department, especially the Community Policing initiatives. However, there is still a lot of work to do when it comes to keeping our streets safe. We need more resident involvement to make positive changes in our city. I want to be a strong voice for Ward 4 residents,” said Velentin, who also works at Holyoke Community College, HCC.

Valentin, 36, has worked as a Bilingual Senior Academic Counselor at HCC since 2006. She completed her BA in Psychology at the University of Puerto Rico and her MS in Forensic Psychology at the American International College. She is a Licensed Alcohol and Drug Counselor, LADC, in the state of Massachusetts. Before HCC, she was the Director of the Evaluation and Stabilization Unit at the Hampden County Correctional Center; she was also the Director of Arbor House, a 25-bed substance abuse treatment residential program on Pine St. in Holyoke.

As an out Hispanic lesbian, Valentin knows about struggles and faces them head on.

“My sexuality is a part of who I am. I have been out for the past 20 years,” said Valentin. “I am happily married and have lived in Massachusetts since 1998 as an out Latina.”

Valentin plans to knock on doors throughout Ward 4 to start a dialogue with her constituents, to ascertain their needs and expectations. In doing so, Valentin has received feedback and other concerns that the residents have.

“There are many areas of Ward 4 that are struggling with drivers constantly not following the speed limits,” Valentin explained. “Some residents have expressed an interest in looking at options such as speed bumps, changing specific one-way streets signs, etc.”

Fully bilingual, Valentin knows her language skills will help her better communicate with the people she may be representing.

The candidacy’s platform is about transparency and honesty, according to Valentin.

“I am running for City Councilor because I want to be a strong voice for our community. I am open, transparent, and accessible,” Valentin said.

Valentin faces Jason P. Ferreira for the seat. Ferreira is the incumbent Ward 4 councilor. He filled the seat vacated by Timothy W. Purington when he didn’t seek reelection in 2011.

“I have seen how our city has been moving forward and would be honored to be a part of our City Council,” said Valentin.“Ward 4 is such a vibrant, evolving community. I want to ensure that all Ward 4 voices can be heard in the City Council.”

The primary will be on September, 17 and the elections for City Council will take place on November 5, 2013. For more information about Holyoke’s upcoming election dates and candidates, visit: www.holyoke.org/elected-officials/.