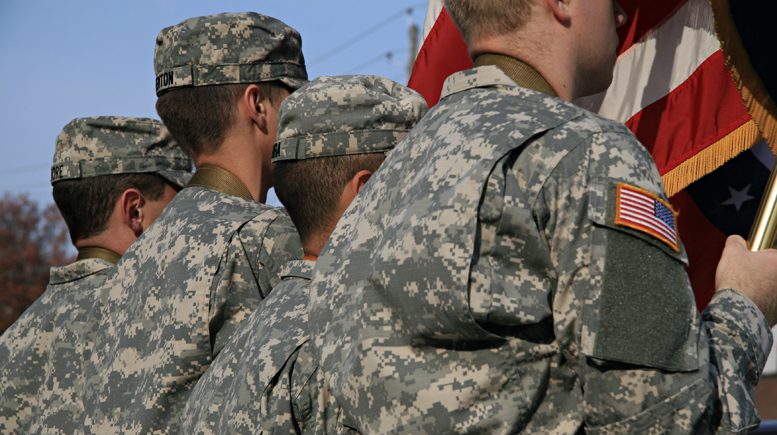 SEATTLE – Lambda Legal and OutServe-SLDN today filed a federal lawsuit challenging the constitutionality of the Trump administration’s ban on military service by transgender individuals. The lawsuit—brought in response to President Trump’s formal issuance of directions to military authorities late Friday—was filed on behalf of two individuals who seek to join the military; one current service member who seeks appointment as an officer; the Human Rights Campaign (HRC), the nation’s largest LGBT advocacy organization; and Gender Justice League, a gender and sexuality civil and human rights organization, headquartered in Seattle.

“This ban not only wrongfully prevents patriotic, talented Americans from serving, it also compromises the safety and security of our country,” Lambda Legal Senior Attorney Peter Renn said. “Thousands of current service members are transgender, and many have been serving openly, courageously and successfully in the U.S. military for more than a year—not to mention the previous decades when many were forced to serve in silence. Once again attacking a vulnerable population based on bias, political opportunism and demonstrably untrue ‘alternative facts,’ President Trump is denying brave men and women the opportunity to serve our country without any legitimate justification whatsoever.”

“We promised that we would sue if the president took this action. The law is on our side; justice is on our side,” said Peter Perkowski, Legal Director for OutServe-SLDN. “And we are on the side of every single transgender service member and those who want to serve. The nation’s courts exist to protect the people whom tyrants would otherwise abuse. Trump can’t tweet his way out of this one.”

Lambda Legal and OutServe-SLDN filed the lawsuit today in the U.S. District Court for the Western District of Washington. The individual plaintiffs, all of whom are transgender, include: Ryan Karnoski, a 22-year-old Seattle man who currently works as a social worker and wishes to become an officer doing social work for the military; Staff Sergeant Cathrine (“Katie”) Schmid, a 33-year-old woman and 12-year member of the U.S. Army currently serving in Joint Base Lewis-McChord in Washington, who has applied to become an Army Warrant Officer; and Drew Layne, a high-school student from Corpus Christi, Texas, who is about to turn 17 and, with parental support, wants to join the Air Force. HRC and Gender Justice League have joined the lawsuit on behalf of their transgender members who are harmed by the ban.

“Our military is stronger when any qualified American willing to defend our country is able to serve, regardless of their gender identity,” said HRC National Press Secretary Sarah McBride. “It is an unconscionable and unconstitutional breach of trust for the president to single out brave transgender service members and able recruits for discrimination. The harm that this administration is causing to both these courageous Americans and our national security must be stopped. We are proud to be a plaintiff on behalf of our transgender members currently serving or wishing to enlist or commission, but who find their careers and their future under attack – and we thank all of the plaintiffs, Lambda Legal and Outserve-SLDN for their leadership in challenging this dangerous directive.”

“Gender Justice League has been fighting on behalf of transgender people for the dignity that all people deserve. At a time when transgender people are facing alarming rates of discrimination, violence and lack of access to housing and medical care, this blatantly discriminatory ban is a slap in the face to our members,” said Danni Askini, Executive Director of Gender Justice League. “We have made strides in Washington state to put this kind of government sanctioned discrimination behind us. This ban stands against our state’s values that all Washingtonians deserve the same rights and freedoms guaranteed under the Constitution.”

On July 26, President Trump posted a series of tweets in the early morning hours announcing that, “The United States Government will not accept or allow transgender individuals to serve in any capacity in the U.S. Military.” The tweeted ban was swiftly and widely condemned by more than 56 retired generals and admirals and a large percentage of Republican and Democratic U.S. senators and representatives.

Despite that criticism, the White House proceeded to issue a memorandum directing the military to continue the ban on enlistment by those they learn are transgender, even though our armed forces currently are facing recruitment challenges, including in high demand positions like linguists, health care providers, social workers and aviators. The enlistment ban also bars transgender members of the military currently serving openly, such as Staff Sergeant Schmid, from obtaining appointments as officers. The memorandum further orders the return to past anti-transgender policies affecting continued service and medical care of those known to be transgender after the development of an implementation plan by the Secretary of Defense. Today’s lawsuit against President Trump, the United States of America, Secretary of Defense James Mattis and the U.S. Department of Defense is based on the Constitution’s guarantees of equal protection, due process and free speech for all.

Staff Sergeant Schmid said, “I love serving my country, which I’ve been doing for more than 12 years. Since the ban on open service by transgender men and women was lifted, I’ve been able to live and serve as my authentic self, which has allowed me to form stronger bonds with my fellow service members.”

“This ban is disrespectful and dishonorable to the thousands of transgender men and women who are boldly and bravely serving our country,” added Lambda Legal Staff Attorney Sasha Buchert, herself a transgender military veteran. “It deprives our armed forces of those wanting to serve at a time when the military is already facing threats on multiple fronts. It also is disrespectful to the leadership at the Department of Defense who worked to develop and implement the current policy allowing open service, which has been operating successfully for more than a year.”

The government-commissioned RAND study released in May 2016 determined that the cost of providing transition-related care is exceedingly small relative to U.S. Armed Forces overall health care expenditures, that there are no readiness implications that prevent transgender members from serving openly, and that numerous foreign militaries have successfully permitted open service without a negative effect on effectiveness, readiness or unit cohesion. Based on that study, the Pentagon lifted the ban on open service by transgender men and women in July 2016.
The lawsuit is Karnoski v. Trump. Read a copy of the complaint here: https://goo.gl/W8rHnb. An FAQ with the latest information about the new policy regarding transgender service members can be found here.

Lambda Legal is a national organization committed to achieving full recognition of the civil rights of lesbians, gay men, bisexuals, transgender people and everyone living with HIV through impact litigation, education and public policy work.  For more information, visit www.lambdalegal.org.

OutServe-SLDN is the largest non-profit, legal services, advocacy and policy organization dedicated to bringing about full LGBT equality to America’s military and ending all forms of discrimination and harassment of military personnel on the basis of sexual orientation and gender identity.  For more information, visit www.outserve-sldn.org.