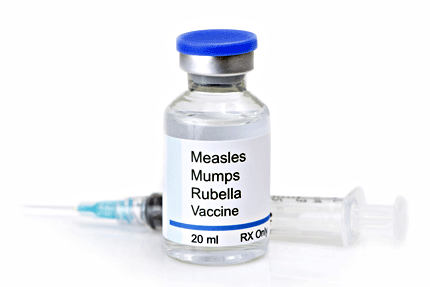 Between one-third and one-half of individuals in the United States who were infected with HIV around the time of birth may not have sufficient immunity to ward off measles, mumps, and rubella—even though they may have been vaccinated against these diseases. This estimate, from a National Institutes of Health research network, in collaboration with the Centers for Disease Control and Prevention, is based on a study of more than 600 children and youth exposed to HIV in the womb.

“Having a high level of immunity to measles, mumps, and rubella is important not only for an individual’s health, but also for preventing disease outbreaks in the larger community,” said the study’s first author, George K. Siberry, M.D., Medical Officer in the Maternal and Pediatric Infectious Disease Branch of NIH’s Eunice Kennedy Shriver National Institute of Child Health and Human Development (NICHD). “Individuals infected with HIV at birth who did not have the benefit of combined antiretroviral therapy before they were vaccinated should speak with their physician about whether they need a repeated course of the vaccine.”

The study was published online in Clinical Infectious Diseases.

From 2007-2009, the researchers enrolled children ages 7 to 15 from 15 sites across the United States and Puerto Rico. Participants were part of the Pediatric HIV/AIDS Cohort Study (PHACS), an NIH-funded follow-up study of individuals exposed to HIV in the womb. The researchers checked serum specimens from the study volunteers for antibodies against measles, mumps, and rubella. Antibodies are immune system proteins that help protect people against infections.  The researchers tested samples from 428 children who became infected with HIV around the time of birth. The researchers referred to these individuals as the PHIV (perinatally HIV-infected) group. The study investigators also tested serum from 221 children whose mothers had HIV, but who did not become infected—the HIV-exposed, uninfected (HEU) group.

On average, the PHIV children were much less likely to have protective levels of antibodies against measles, mumps, and rubella than did the HEU group. PHIV children who started combined antiretroviral therapy before receiving their MMR vaccine doses were more likely to have protective levels of antibodies against all three diseases, especially if they had higher levels of CD4+ cells at the time they were vaccinated. CD4+ cells are infection-fighting white blood cells, and tests of CD4+ levels are an important indicator of how well the immune system is functioning.

The authors wrote that because the older children in the study are representative of the PHIV population in the U.S., it is possible that many other PHIV youth may also lack adequate immunity to measles, mumps, and rubella. The study authors recommended that individuals who received their MMR vaccinations before the advent of combined antiretroviral therapy should ask their physicians if they need an additional two doses of the vaccine.

About the Eunice Kennedy Shriver National Institute of Child Health and Human Development (NICHD): The NICHD sponsors research on development, before and after birth; maternal, child, and family health; reproductive biology and population issues; and medical rehabilitation. For more information, visit the Institute’s website at www.nichd.nih.gov/.

About the National Institutes of Health (NIH): NIH, the nation’s medical research agency, includes 27 Institutes and Centers and is a component of the U.S. Department of Health and Human Services. NIH is the primary federal agency conducting and supporting basic, clinical, and translational medical research, and is investigating the causes, treatments, and cures for both common and rare diseases. For more information about NIH and its programs, visit www.nih.gov.