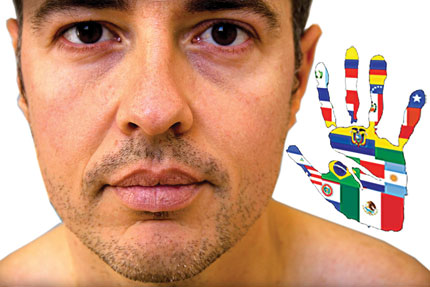 BOSTON, Mass.—While celebrating Hispanic Heritage month, to honor the culture and contribution of this ethnic group, organizations still lag behind serving LGBTQ Latinos when compared to the broader LGBT community, according local and national Latino leaders.

“LGBTQ Hispanics are minorities within both the mainstream Hispanic and LGBT communities,” said Francisco Dueñas, Director- Diversity, Inclusion and Proyecto Igualdad, Lambda Legal. “As such, the needs of LGBTQ Hispanics usually fall through the cracks. LGBTQ Hispanics may fear that a Latino service agency will be homophobic or transphobic and that the LGBT service agency may be racist or xenophobic.”

Cultural education and breaking down cultural barriers are critical components for an organization to serve this community effectively, according to a local leader.

“As a service provider, you want people to trust you,” said Dueñas. “When you are not aware of a person’s culture and language, your message can get lost in translation. In the worst-case scenario, you could be sabotaging your own efforts and not know it.”

Nonetheless, Hispanic stereotypes abound and many organization or community leaders do not deeply understand what this truly means.

“Without an individual, group, organization, business, government, etc., understanding the Hispanic Culture and the beautiful and bountiful differences between each distinct culture within that community and their language nuances, stereotyping and generalizing become the norms,” said Nelson Rafael Roman, Associate Director of LightHouse Teens Holyoke and Candidate for Ward 2 City Councilor, Holyoke Mass. “This can bee seen by treating Puerto Ricans as Mexicans or Colombians as Spaniards—not that there is an inherent positive or negative to being associated with any of these cultures. However, our individual culture within the Hispanic/Latino rainbow is one to be proud of.”

“I co-founded and organized, for the first ten years, Latin@ LGBT Pride because I wanted to celebrate our diversity and honor our Latino heritage,” Labiosa said. “We have more than 525 years of history and are a mix of cultures, Spanish, African, Taino indian, European, Asian, and so many others. We must use this time to educate others about us and to educate others against the hatred and racism that exist towards us.”

With a clear vision established for Latin@ Pride, Labiosa expressed frustration with the current state of Latin@ Pride under Boston Pride’s leadership.

“Many organizations, including those that are LGBT, think that by just celebrating a Latino pride party or by just recognizing an act of diversity, believe that they are already diverse. This [couldn’t be] further from the truth,” Labiosa added. “The Boston Pride Committee should listen to the pleas of the community and to the many folks who have outreached to them, including those who [halted] the parade this past year. I feel awful that the Latin@ LGBT Pride celebration has turned into just an award ceremony and parties—this was never meant to be … Instead, it was meant to be a celebration of our diversity and educating others about us … It was the oldest and longest celebration of its kind in the U.S. I feel bad that the new generations of Latin@ LGBTs will not learn about our history and diverse heritage. We are not just here for a party. We are educated, we are diverse, we are love, and we are Latin@.”

“Black Pride and Latin@ Pride teams combined forces to cater to the entire people of color community and offer a variety of events during Pride Week,” he said. “In previous years, Latin@ Pride events were held during Hispanic Heritage Month (September/October).”

For Hispanic Heritage Month, Bruni added, they will hold an awards ceremony this year.

“For Hispanic Heritage Month, we have partnered with Mojitos Boston to host our 2015 Latin@ Heritage and Pride Awards Reception,” said Bruni. “The event will be held on October 22nd. The Latin@ Pride Awards recipients will be announced later in October.”

A grasp of understanding LGBTQ Latino needs is reflected in how an organization outreaches and allocates resources specifically to the Hispanic community.

He also said that a comprehensive plan should be established to best reach the Latino community.

“To help eradicate barriers that some in the Latin@ community face, language access plans need to be created and implemented to make more, if not all, services and programs bilingual and bicultural,” Yarbrough said. “Staff and community trainings can also be helpful for understanding the unique needs of the Latin@ LGBTQ community and ways to support Latin@ LGBTQ individuals in navigating support, resources, and community.”

The most difficult problems “facing LGBT Latino youth are related to negative responses to their LGBT identity,” a recent Human Rights Campaign (HRC) report on challenges related to LGBT Latino Youth found. “Concern about family acceptance is the top problem identified, and having their families accept and support them is a key change they wish for in their lives.”

Dueñas said mainstream organizations, even those that work with LGBT Latino youth, “rarely” understand the inherent needs of this population.

The HRC report stated that “slightly less than half of LGBT Latino youth have an adult in their family they can turn to if worried or sad, while 8 in 10 of their non-LGBT Latino peers do have such an adult.”

“Many LGBT organizations will work with LGBT Latino youth but completely ignore the needs of their Latino parents and extended family,” Dueñas added. “While that service provision model may be necessary for some youth, it may undermine and be stymied by Latino cultural norms that may be more appropriate and beneficial. This is rarely understood by LGBT service providers. Latino service providers may not even offer this support.”

Roman agrees there is more work to be done and challenges organizations to rise to the occasion.

“I believe that there has been a genuine effort in attempting to understand and respect this community to some extent and while I applaud these efforts of mainstream organizations and leaders, I must still challenge them to go a step further,” he said. “If companies offer sensitivity trainings around LGBT issues and rights, so should they be required to offer trainings around cultural sensitivity, and a blending of the two.”

For Labiosa, who is also the Co-host of Univision’s radio show, Saliendo del Closet, the answer is clear.

“To those who are trying to appease us, don’t just continue to ‘colorize’ your organization,” he said. “Instead, call or email folks and work collaboratively with those who are diverse.” [pullquote]“When we feel we don’t have the expertise, we partner, and have done very fruitful work with the Hispanic Black Gay Coalition, Boston GLASS, Latino Health Institute (when it existed) and more.” —Carisa Cunningham, Director of Public Affairs & Education, Gay & Lesbian Advocates & Defenders.[/pullquote]

And some organizations are doing just that.

“When we feel we don’t have the expertise, we partner, and have done very fruitful work with the Hispanic Black Gay Coalition, Boston GLASS, Latino Health Institute (when it existed) and more,” said Carisa Cunningham, Director of Public Affairs & Education, Gay & Lesbian Advocates & Defenders. “We do always feel we could do more, but hope that the intersectionality of the work we currently do, reaches far.”

“HBGC co-leads a bilingual leadership development program for survivors of partner abuse and other forms of violence. [It also] organizes community forums and events that specifically speak to the Latin@ LGBTQ experience, such as Latin@ socials hosted earlier this year and a community forum on how HIV/AIDS impact Latin@ communities,” Yarbrough said. “Most importantly, HBGC strives to create a sustainable model of empowering Latin@ communities by developing Latin@ LGBTQ leaders to serve at all levels of the organization.”

Roman said that welcoming Latinos is followed by actions, not mere words or subjective interpretation. [pullquote]Yarbrough explained the significance of HBGC’s participation in Boston-based TOD@S Collaborative, a partner abuse prevention and intervention project, specifically spearheaded to address the unique needs of LGBTQ people of color.[/pullquote]

“I believe it all goes back to the basics,” he affirmed. “Communicate. Educate. Respect and stop speaking for us. Stop trying to ‘understand our plight’ and grassroots mobilize [instead]. We, as the broader LGBT community, cannot assume that Latinos are welcomed and feel welcomed, [just] because you say it is so. We need to support our community and our movement in our spaces, on our time, and in our unique cultural interpretation of everything.”

It’s time for Latinos to step into leadership roles within organizations that claim to serve the LGBT community.

To be inclusive, according to Roman, is to include.

Natalia Muñoz, former owner of Spanish publication La Prensa, summarized it by saying it shouldn’t be about a celebration, but about the rights of Americans (of all colors and ethnicities) every day of the year.

“These thematic celebrations, such as Hispanic Heritage Month, are only as celebration-worthy as our rights. As long as there is legal discrimination of LGBTQ people of color in housing, employment, health care, education, immigration and other societal spheres, what are we celebrating?” Muñoz said. “That some can party and others not? That’s not progress. In Puerto Rico we have a saying: ‘O bailamos todos o rompemos la victola.’ Either we all dance or we break the music player!”