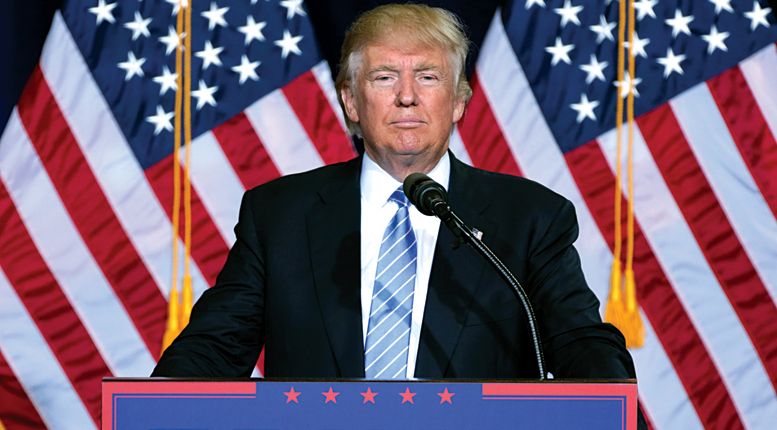 LGBT Rights Organizations are in fierce opposition to an executive order,“Protecting the Nation from Foreign Terrorist Entry into the United States,” signed Friday by President Trump. The order bans immigration from seven primarily Muslim nations and indefinitely blocks Syrian refugees from seeking asylum, according to the Advocate.

“We don’t want them here,” Mr. Trump said during the order’s signing, reports The New York Times. “We want to ensure that we are not admitting into our country the very threats our soldiers are fighting overseas. We only want to admit those into our country who will support our country, and love deeply our people.”

The order imposed a 90-day suspension of travel from Syria, Iran, Iraq, Sudan, Libya, Somalia, and Yemen. Trump, who maintained that the action was to keep out “radical Islamic terrorists,” also imposed a religious test that, in the future, would favor Christian immigrants over Muslims.

According to Vox.com, ProPublica estimated, based on statistics about who’d received green cards over the last 10 years, “that 500,000 legal permanent residents of the United States might be banned from re-entering the country if they left, or if they’re currently abroad.”

The Advocate reported that the move “followed a Wednesday executive order that began plans for a wall to be built on the Mexican border … ” Last week Trump also focused his efforts on curbing women contraceptive rights, advancing the construction of Dakota Access Pipeline (Standing Rock), and making the U.S. leave behind its participation on TPP (Trans-Pacific Partnership Negotiations and Agreement),  among others.

Countless LGBTQ refugees fleeing violence in countries like Syria and Iraq will suffer from the executive order to suspend the refugee admissions program. The executive order will prevent refugees from escaping some of most violent regimes in the world. HRC’s report, “Helping LGBTQ Refugees and Asylum Seekers in the Age of ISIL,” highlighted how men alleged to have sex with men are hunted down by ISIL, targeted on social media and subjected to extreme violence.

Among the vicious attacks: ISIL has tied nooses around these men’s necks and dragged them behind trucks, burned them alive, thrown them off buildings and stoned them to death.

“America is a beacon for LGBT people around the world, and restricting rather than expanding access to our shores harms us all. Donald Trump’s actions may score him points with his political base, but those points will come at the expense of lives lost, families broken apart and billions of taxpayer dollars wasted.”

“Targeting immigrants, Muslims, and refugees inverts what we know to be America at its best: a country that is made stronger by diversity and a country with freedom—including freedom of religion—as a core value. As the proud son of immigrants, I have witnessed the power of that American ideal firsthand. We in the LGBTQ community stand in solidarity with all immigrants, asylum seekers, and refugees, LGBTQ and non-LGBTQ, at this dark moment. The executive orders are not only un-American, they are ineffectual if they are meant to make America “strong.” They in fact weaken us by dividing us, and we refuse to be divided.”

The NCLR, through its Executive Director, Kate Kendell, Esq. also reacted to the discriminatory order by stating: “The executive order blocks any immigration relief to those coming to the U.S. from predominantly Muslim countries, suspended the refugee program that has saved the lives of thousands of displaced people, treats asylum seekers who are fleeing violence and persecution in their own countries as suspected threats to our national security, increases the use of costly and inhumane mandatory detention including for immigrants who have no record of criminal or violent behavior, and erodes state and local control of community policing.

From Twitter (below) people, celebrities and others reacted to the #MuslimBan.

Along with liar,racist,misogynist,fool,infantile,sick,narcissist-with the Muslim ban we can now add heartless & evil to DT's repertoire.

On Holocaust Remembrance Day Trump chooses to deny refuge to the least of us pic.twitter.com/Tqk0St99FJ

To our Muslim neighbors in the world: I & tens of millions of others are so very sorry. The majority of Americans did not vote 4 this man.

SIGN THIS to be sent to US House of Representatives: Reject Trump's #MuslimBan https://t.co/VSRzA4wtEv #NoBanNoWall

Approximately 200 protesters @Dulles_Airport have a message for @realDonaldTrump and anyone wanting to travel to the US #MuslimBan @DCW50 pic.twitter.com/KweJ8B2C8B

Muslim-majority countries where @POTUS TrumpOrg has done biz or pursued deals not on his proposed #refugee #ImmigrationBan list. #MAGA pic.twitter.com/D91urMLBJK

It's not about terrorism, or even religion. It's business.#TrumpBan #MuslimBan pic.twitter.com/6ZYTlnG2X0

I've noticed that people who aren't for #ExtremeVetting haven't seen all of the women being raped in Europe by refugees.#RefugeesDetained

"Injustice Anywhere Is a Threat to Justice Everywhere" #MLK

Today Trump issued a #MuslimBan and now muslims are being attacked at airports #ExtremeVetting https://t.co/WSbq1EWVTy

#ImpeachUnPOTUS Protect all citizens from the Rath of Trump pic.twitter.com/Mgsa4BGfFb

[Excerpts from Various News Releases were added to the Report]