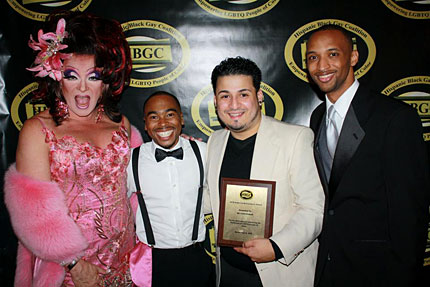 Hispanic Heritage Month—celebrated annually from September 15 through October 15—recognizes the cultures, histories and contributions of individuals with ancestral roots in Central and South America, Mexico, Spain and the Caribbean.

“As a proud Mexican American, I celebrate my culture year round, never afraid to share my family history and background,” said Gustavo Alonzo Torrez, Jr., program manager at Fenway Health. “First generation on my father’s side, hearing the stories of him crossing the border at a young age to create a life for himself is remarkable. Hispanic Heritage Month is a moment for us all to reflect not only our culture and history but to remember the struggles which our communities have and continue to face.”

Many organizations have noted that the achievements of Hispanic lesbian, gay, bisexual, transgender and queer individuals are often overlooked during these festivities, while at the same time, LGBTQ organizations do not often reflect or take into consideration the diversity within their own communities.

“It’s critical for mainstream LGBTQ organizations and leaders to be inclusive of all races and ethnicities,” Torrez said. “Our movement for equality crosses all racial and ethnic lines, socioeconomic groups, and truly the entire spectrum of LGBT and Q people. We still face stigma and discrimination based on our sexual orientation and gender identity as it is. When you add race and ethnicity into the mix, for many the stigma and discrimination is greater.”

“It is important for us to celebrate Latin@ Pride and Hispanic Heritage Month as an LGBTQ organization because the Latin@ community is a part of the LGBTQ community and they bring many unique talents and perspectives to the table that helps make our community so special,” said Yarbrough. “Celebrating the month also allows us to bring attention to the work that still needs to be done, such as the disparities around healthcare, employment, and access to resources that further disproportionately impact the Latin@ LGBTQ people as well.” [pullquote]Boston Pride, on September 23rd via its e-blast, sent general information about their hosting of a Latin@ Pride Awards Reception at Northeastern University, October 16 at 6 p.m. TRT contacted Boston Pride to learn what other events they may have planned for Hispanic Heritage Month or to participate in this story, but did not receive the information requested from them.[/pullquote]

Natalia Muñoz, founder and director of Verdant Multicultural Media, explored whether or not mainstream LGBT organizations understand the struggles inherent to Hispanic and Latino LGBTs.

“I think that mainstreams LGBT community organizations have goodwill to understand Latinos, but when Latinos—as well as other underrepresented communities—are not in the position of making decisions and setting policies at these organizations, then they do not understand the struggles in a personal way,” said Muñoz. “They lack the fire, the emotional reaction, that pushes civil rights movements forward. Good intentions are not enough; sustained outreach is what is needed.”

Torrez shared some other issues that particularly affect the Hispanic LGBTQ population.

“When addressing the needs of the diverse populations we all serve, there are challenges we commonly come across. Language barriers are always difficult, no matter the communities we serve,” Torrez said. “Having materials translated and even photos reflective of the true diversity of our communities is just one example of what we should strive to do more. With a lack of resources, I think we all understand that this is a challenge, but it presents an opportunity to identify non-traditional partners for us to collaborate with as we work to better the health of our communities.”

Torrez noted that while Fenway does not specifically celebrate Hispanic Heritage Month, their focus and commitment to all communities, inclusive of race and ethnicities, “is steadfast,” and that since 2009, the number of patients who self-identify as belonging to a community of color has increased by 106 percent, a reflection of Fenway’s work to engage more patients of color with their services.

Yarbrough shared that the annual HBGC LGBTQ Youth Empowerment Conference, held in early October, will feature two groundbreaking Latin@s as their keynote speakers: Ritchie Torres, the youngest and first openly gay city council member of the Bronx, and Denice Frohman, a top ranking female spoken word artist. HGBC is also running a social media campaign created by Honor41 to celebrate Hispanic and Latin American people during the month, sharing a video each day that highlights Latin@ LGBTQ individuals who are “standing in their pride and making a difference for their community.” They are also co-organizing an event for National Latino AIDS Awareness Day

“Ideally, we would like the event to bring awareness to how HIV/AIDS is impacting the Latin@ community, especially gay and bisexual men in the Latin@ community,” said Yarbrough. “We would also like to use the space to discuss how more resources can be invested in the health of Latino men.”

The group will also dedicate their monthly discussion groups to discussing issues that impact the Latin@ community, including a community circle discussion about racism within the LGBTQ community and its impact on Latin@ and Black LGBTQ people.

This will include honoring Bamby Salcedo at their gala in November. Bamby is a Latina transgender woman recognized nationally for her advocacy work, and is founder and president of The Trans-Latin@ Coalition.

Wilfred Labiosa, radio co-host of Saliendo del Closet (Coming Out of the Closet, in English), board member of Unid@s, MassEquality, and of the LGBTT Community Center of Puerto Rico, shared his ideas about celebrating Hispanic heritage year round.

“In the U.S., every day, every month we celebrate or decide to commemorate something instead of talking and commemorating it, whatever it may be, throughout the year,” said Labiosa. “Hispanic Heritage or African American Heritage should be taught in schools throughout the year and not just during one month. The history, culture, religious/spiritual beliefs, language, food, etcetera should be included in the curricula throughout the whole academic year and in summer camps.”

Muñoz shared similar sentiments. [pullquote]“I think that mainstreams LGBT community organizations have goodwill to understand Latinos, but when Latinos—as well as other underrepresented communities—are not in the position of making decisions and setting policies at these organizations, then they do not understand the struggles in a personal way … Good intentions are not enough; sustained outreach is what is needed.”” said Muñoz.[/pullquote]

“I think the only time frame appropriate for celebrating any community’s history is all year long,” said Muñoz. “Four weeks for Hispanic Heritage, like February for Black History Month, feels like a band-aid for a deep wound caused by centuries of oppression. It is appropriate to promote social justice for communities that historically have been marginalized. Once we attain equality, then let’s celebrate that.”

Labiosa also commented on the inclusivity of LGBTQ organizations.

“This has been a struggle for many ‘mainstream’ LGBT organizations throughout the years. Many leaders do a good job at inclusivity of diverse ethnic and cultural backgrounds but many others fail,” Labiosa said. “They may think they are doing it but they are not. Some local organizations and their leadership have improved but many others have to continue to work on it. It is not just inclusive to translate a website or a poster or hire one Latino staff. Full inclusion means full inclusion, just like equal rights are not exclusive rights for the LGBT community.”

Torrez and Muñoz offered their own ideas of what might help in the future.

“While some mainstream groups are inclusive, there is still so much to be done. We are only as strong as we are united, and whether we are working on marriage equality or addressing health disparities, the importance of inclusion of all people within our communities is vital,” Torrez said. “We all should look at our leadership, our boards, our membership and ask ourselves how inclusive are we, and are there opportunities for us to do better? In my eyes, we can always do more!”

“All organizations, both private and public, have to do a much better job of being inclusive beyond expressing the wish for it,” Muñoz added. “…An LGBT organization that is comprised mostly by one group but claims to represent all groups has work to do in order to be credible with everyone.”

Boston Pride, on September 23rd via its e-blast, sent general information about their hosting of a Latin@ Pride Awards Reception at Northeastern University, October 16 at 6 p.m. TRT contacted Boston Pride to learn what other events they may have planned for Hispanic Heritage Month or to participate in this story, but did not receive the information requested from them.