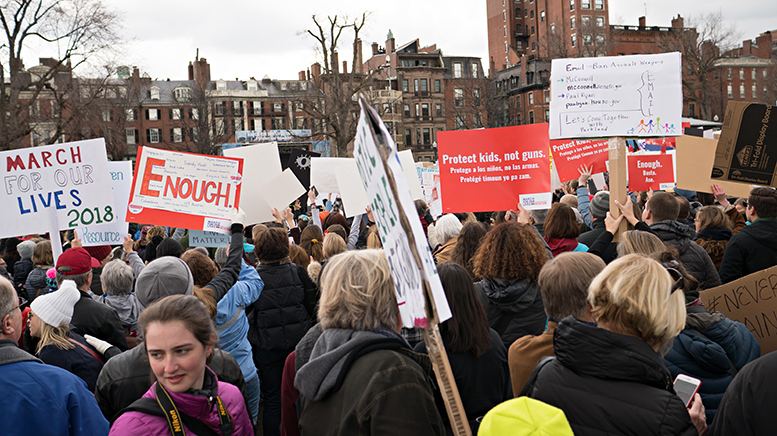 March For Our Lives protesters in Boston Photo: Steve Jewett

March for Our Lives Will Not Deter From Its Goals

Undoubtedly, at some point, something’s got to give. I just hope that the onslaught of lives doesn’t continue in the meantime, but the longer we wait, that is inevitable. That’s just the problem though. Most people don’t want it to continue, but most people didn’t do enough to combat the tragic epidemic that has claimed so many lives across the board. Because of it, the March for Our Lives was born.

The tragic shooting at the Marjory Stoneman Douglas Parkland, Fla. High School was the catalyst for what became the largest anti-gun violence rally in our history. The determined and fed up student survivors organized the massive rally in Washington DC and sister rallies around the nation just six weeks later. However, to the surprise of many, though the student’s grassroots initiative unleashed incredible momentum toward the end of gun violence and gun control, participation was much more diverse than today’s youth.

According to research and data collected during the March for Our Lives rally, by Dana R. Fisher, “Only about 10 percent of the participants were under 18. The average age of the adults in the crowd was just under 49 years old, which is older than participants at the other marches I’ve surveyed but similar to the age of the average participant at the Million Mom’s March in 2000—also about gun control,” reported the Washington Post.

This information is critical because to get anything resolved with the senseless murders perpetrated by gun violence, a broader community must be involved. Nonetheless, in the same sense, why did it take the leaders of tomorrow to take the lead today?

During the rally in DC, there were countless cries and warnings to politicians that do not do something to derail the massive gun violence experienced in the U.S. The message was strong and clear: They would be voted out of office because the youth—most of whom will be of voting age in the next upcoming years—would make sure of it. And, the results look promising.

Just as the students took the reins in leading the March for Our Lives movement, they are relentless in their objectives. A concern for many, myself included, was that the momentum would die down and people would become disengaged, as it has happened time and time again. But, the momentum hasn’t died down, albeit it is not front and center on cable news at the moment.

According to the Huffington Post, “Stoneman Douglas students from Parkland, Fla., and the people they’ve inspired, seem intent on keeping the issue of gun violence at the forefront in the coming weeks: Marches and rallies have continued, and there are plans for a nationwide school walkout on April 20, the 19th anniversary of the Columbine High School massacre.”

March on friends, march on.

For more information or to get involved with March for Our Lives, visit their website at marchforourlives.com.

*Nicole Lashomb is the Editor-in-Chief of The Rainbow Times. She holds an MBA from Marylhurst University and a BM from SUNY Potsdam, The Crane School of Music. She can be reached at editor@therainbowtimesmass.com.