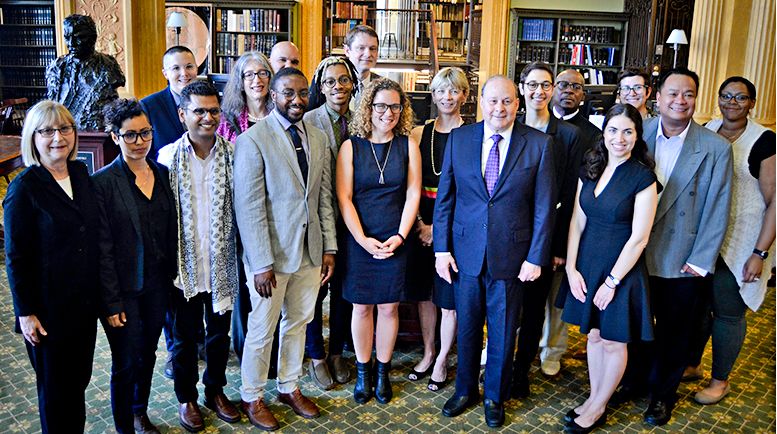 BOSTON—The Massachusetts Commission on LGBTQ Youth swore in swear in new members and released a set of policy recommendations at a ceremony celebrating the 25th anniversary of the only statewide LGBTQ youth commission in the country on June 20 at the Massachusetts State House.

“Twenty-five years ago, Massachusetts became the first and only state with a commission dedicated to the needs of LGBTQ young people,” said Hannah Hussey, Director of Policy and Research for the Commission. “While the past 25 years have witnessed much progress, significant work remains to address disparities in substance use, mental health, violence, and housing instability for LGBTQ young people.”

“Celebrating progress and laying out the work yet to be done is the focus of the LGBTQ Commission’s work,” said Senate President Stan Rosenberg (D-Amherst). “I celebrate their bravery and leadership every day as they help knock down one barrier after another to a free, open, and meaningful life for thousands of our friends and neighbors.”

“LGBTQ youth often face enormous challenges and are at risk of homelessness, victimization from violence, drug abuse and suicide,” said Health and Human Services Secretary Marylou Sudders. “We look forward to continuing our work with the Commission to promote inclusion, understanding and to address the challenges of the LGBTQ youth populations we serve.”

The Commission works with state partners each year to advance policies and programs for LGBTQ youth to thrive. Successes include the adoption of guidance on transgender youth by the Department of Elementary and Secondary Education and a LGBTQ policy and training initiative at the Department of Youth Services, both of which are now national models.

Priorities highlighted at the ceremony included LGBTQ youth who are homeless or system-involved, sexual health, and juvenile and criminal justice.

“As a six-year member of the Commission, I am proud of the work we have accomplished for LGBTQ youth across the Commonwealth,” said Senator Julian Cyr (D-Truro). “Unfortunately, the disparities that persist for LGBTQ youth are simply unacceptable in 2017. We can do better in Massachusetts. State policymakers must work closely with advocates and community members to close the gaps and celebrate queer young people for who they are.”

The Commission remains the only statewide LGBTQ youth commission in the country.

The recommendations can be viewed here.