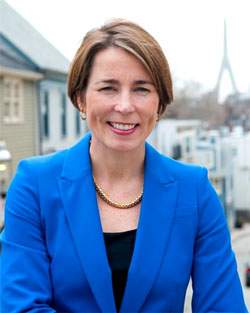 BOSTON, Mass.—More than 800 people attended the Attorney General’s inauguration on Wednesday at Boston’s Faneuil Hall. Maura Healey took the historic oath of office, which made her commonwealth’s 55th Attorney General.

Administering the oath of office was Ralph D. Gants, the chief of the Massachusetts Supreme Judicial Court. The master of ceremonies was Mo Cowan, who served as interim U.S. senator after John F. Kerry became US secretary of state.

The 43-year-old from Charlestown solemnly promised to run her office, according to the Boston Globe, “guided by values of responsiveness, inclusion, and integrity.” Healey vowed to connect her office more with the people and to keep an eye on for-profit colleges and incoming casinos.

In her speech, as per the Globe, Healey spoke proudly and patriotically about Faneuil Hall, naming it a “place were lawyers are admitted to the bar, and where immigrants become citizens — both swearing allegiance to the Constitution and to the principles of liberty, equality, and justice.”

“This is a historic day in Massachusetts. Besides being the first openly-gay attorney general in the nation, Maura brings a wealth of experience, knowledge and skill to this position. The intensity and compassion she will bring to the AG’s office is clearly in evidence as seen with her eagerness to hit the ground running and tackle several different issues, from opioid abuse to protecting our children. We’re looking forward to working with Maura and fighting side-by-side with her.”

“I’m looking forward to working with MassEquality and other partners to continue the fight for civil rights and expanded opportunity. It will take determination and partnership to address discrimination and disparities, but MassEquality has always stepped up to take on tough challenges. This year is another opportunity to lead,” said Attorney General Healey.

The MassEquality PAC was the first organizational endorsement for Maura Healey, announcing its endorsement in December 2013.

[Parts of this report are from a News Release]