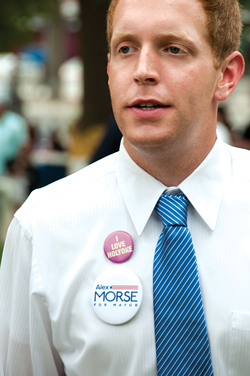 HOLYOKE, Mass—The city of Holyoke celebrated June’s LGBT Pride Month with the raising of a rainbow flag at city hall last month. The ceremony included poetry, speeches and music from city residents. The event was inspired by the openly gay Mayor Alex Morse, who sat on the Massachusetts Governor’s LGBT Commission for three years and founded Holyoke For All, the first LGBT nonprofit organization in the area.

“It’s important to send the message that Holyoke has a thriving and diverse LGBT community here in Holyoke. The LGBT community exists beyond Northampton. Holyoke is a diverse, tolerant city,” wrote Mayor Morse in an e-mail, who hopes this will become an annual gathering. “[It] was important to send a message to my LGBT residents, but most importantly to send a message to our city’s youth that we love them, accept them, and are here to support them.”

Mayor Morse himself spoke at the ceremony, along with LGBT ally and City Councilor Gladys Lebron-Martinez. Due to his contributions to the Holyoke community, former city council official Tim W. Purington, who was the first openly gay elected city official in Holyoke, was invited by Mayor Morse to speak as well.

“As far as I know there has never been any formal pride activity [organized by city officials] and this was a really great start to show some pride in Holyoke,” said Purington, who was impressed both with the size of the flag and the crowd.
Other speakers at the event included teenage residents Miguel Torres and Jazmine Herrera, members of the Holyoke Equal Rights Association (HERA). This support group is a program of the Holyoke Youth Task Force that meets every Thursday at 5:30 p.m. at the Holyoke Health Center.

“I know that the [youth] have had a really long, hard road of feeling accepted in their community and to be able to see their community raise a gay flag, I think it really was life changing for them,” said Amy Epstein, who runs HERA. At the weekly meetings Epstein receives around 20 to 30 young adults and estimates that every year she sees over a hundred.

Although no protesters were seen at the flag-raising ceremony, Morse’s administration did receive one phone call from a resident complaining about the event.

Another citizen, Marcella Jayne, felt that despite her support for the LGBT community she believes Mayor Morse was more interested in enhancing his administration than equal rights. The 25-year-old is an eight-year resident of the city and voted for Mayor Morse during his first election, but questions if she would reelect him.

“I feel a renewed urgency to question the false corollary presented by politicians who rely on the politics of their identities to suggest that because they are a member of one marginalized group that they will therefore represent, defend and advocate for all others,” said Jayne. “I would love to see [an] LGBT event in Holyoke that was inclusive and focused on empowering those LGBT residents who are disenfranchised on many different levels.”

The Frivolist: 5 Ways Laziness Is Costing You