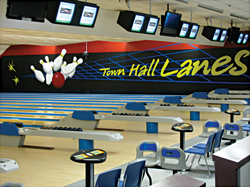 Every Tuesday night at Town Hall Lanes in Johnston, R.I., something quite spectacular happens. For 13 years, the alley has been home to Big Gay Al’s, or what some may consider as the largest duckpin-bowling league in the country.

In 1999, Leo Monteiro, the league president, co-founded Big Gay Al’s with two friends and 12 teams. Today there are 32 teams and counting. Monteiro says that they founded the league after seeing the success and fun of Gay Bingo, which is a monthly fundraiser for AIDS Care Ocean State.

“It’s an outlet for people to get together outside of a club setting, have fun and raise money,” he says. Like Gay Bingo, much of the league’s proceeds go to AIDS Project Rhode Island and AIDS Care Ocean State. Over the past few years, particularly with the shaky economy, the league has also contributed to other organizations like Options, Marriage Equality Rhode Island and Youth Pride Incorporated, as well as a local no-kill pet shelter.

Big Gay Al’s season runs from May 15 to Aug. 21 this year, every Tuesday night from 7:15 to 9:30 at night. Monteiro says that “a lot of folks have never bowled before, or never bowled duckpin, but often make new friends, have a great time and stick around for years.” When asked if he was any good at bowling, Monteiro said he was, partially because he’d been doing it for so long. “It’s not intense or anything. I don’t think anybody takes winning too seriously, even though there’s an award ceremony at the end of the season.”

To participate in the league, which comprises teams of four, interested bowlers should expect to pay $14 per week. Although, it’s about halfway through the season, and there are already several teams, Monteiro encourages folks to come by. Some teams came into the league together, but many have been formed with couples or individuals being paired with other stragglers. “There’s always a spot open, because not everyone can make it every week,” Monteiro says.

Each week, the league holds a 50/50 raffle. Tickets are three for $1 and 20 for $5. The first ticket drawn will win 50 percent of the money collected that night. The second ticket drawn will have a chance to bowl for the running jackpot, which starts at $20. If you bowl a strike, you win the jackpot week.

Monteiro says that he had looked up other gay bowling leagues and found a few in California with 20-plus teams, but none so large as Big Gay Al’s.

“Pretty impressive for such a small state,” he says.

To find out more about Town Hall Lanes, visit: http://townhalllanes.com/