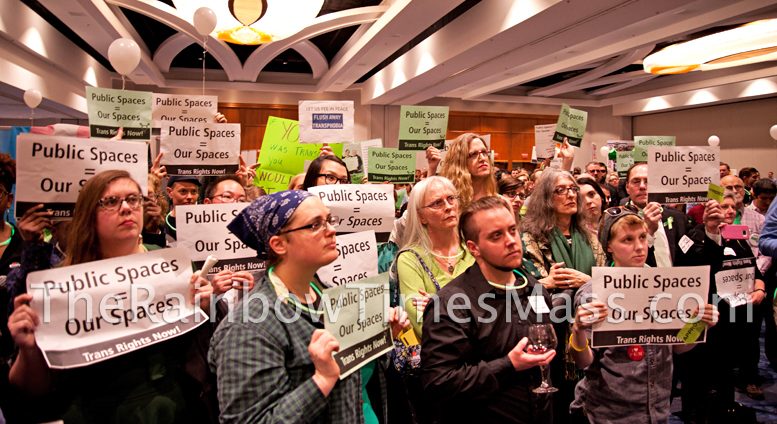 ***UPDATE: The organizers of Wednesday evening’s action have released a response to Governor Baker’s comments on the public accommodations bill. Click here to read the statement.

“It’s understandable why the transgender community and its many allies are frustrated. This bill has been talked about on Beacon Hill for a decade, and every day of discrimination in the Commonwealth is a day of harm and injustice. Transgender people lose their lives for being who they are, and this important bill would ensure explicit protections that make their lives better and make Massachusetts a safer, more welcoming place. …” Read the rest of Freedom Massachusetts‘ statement here.

***UPDATE: Aldebran “Deb” Longabaugh-Burg, a participant in Wednesday’s action and the mother of a transgender son, wrote this letter to the Governor concerning his stance on the public accommodations bill.

***UPDATE: Boston Spirit Magazine publisher David Zimmerman posted a statement on the magazine’s website explaining his reaction to Governor Baker’s speech and his reasoning for inviting the Governor to speak at the event.

“I have also been led to believe that his [Governor Baker] message will indicate progress,” said the email from Zimmerman to one of the organizers.

When questioned by The Rainbow Times about the exchange, Zimmerman said that he was expecting, “a bit of a different speech last night. Despite my best efforts with the governor’s office I feel as though the speech was remarkably tone deaf with regard to the audience.”

On Wednesday evening, members of the trans community and their allies held an informational action at an LGBT networking event sponsored by Boston Spirit Magazine that quickly escalated into a heated exchange with Massachusetts Governor Charlie Baker. Governor Baker has historically been opposed to a bill currently before the Massachusetts Legislature that, if passed, would provide legal protections for transgender people in spaces open to the public such as retail stores, restaurants, and parks.

Wearing green and sporting stickers with the word “APPROVED,” participants in the action walked around the fourth floor ballroom having conversations with event attendees about the public accommodations bill. According to organizers of the action, approximately 90 people had signed up to attend the event to show their support.


“We’re on fire,” said Mimi Lemay, the mother of a trans son who said she spoke to several people about the bill. “We haven’t met one person who has looked at us askance.”

“Ninety percent of the conversations went very well,” said Chastity Bowick of Worcester. “A lot of people are still wondering what’s going on with the bill.”

Though several of the action participants reported positive conversations, the night quickly took a bitter turn when Governor Baker gave his keynote speech. Several people quietly lined the front of the stage with signs proclaiming, “Pass the bill, not the buck,” “Let us pee in peace … flush away transphobia,” “Let us dine in peace,” and “public spaces = our spaces.”

Governor Baker spent most of his speech discussing his accomplishments since first taking office in January 2015, including passing legislation on the opioid crisis, addressing infrastructure issues within the Massachusetts Bay Transportation Authority (MBTA), strengthening the Massachusetts Health Connector and amending the state’s supplier diversity program to be more accessible to LGBT-owned businesses. Baker also lauded the fact that he was one of the few sitting Republican governors to sign on to an Amicus brief to the United States Supreme Court supporting marriage equality and choosing an openly gay running mate, Richard Tisei, when he ran for Governor in 2010.

“And you have my commitment tonight that if and when the bill gets to my desk I will make sure to talk to all parties involved before we make any decisions,” Baker said as groans arose from the crowd.

“Let me say one other thing … I didn’t run for Governor to work on the opioid issue. The opioid issue came to me from conversations I had with people as I was campaigning. The most powerful voices in this conversation have been the families and the individuals who’ve reached out to people in the administration, in my office, and in conversations with me. Their stories and the bravery that comes with them, is compelling, it’s affecting, it’s real and it’s an incredibly important part of understanding. And my recommendation to all of you is that you continue to have those conversations…” Governor Baker continued until he was cut off by jeers and abruptly walked off the stage after wishing the audience a great night.

“He just fed us the same lines he’s been feeding us all along” said Sasha Kaufmann, a co-organizer of the action. “He said that we [Massachusetts] are a leader. Well you don’t lead through silence.”

“Well, [the action] was disruptive,” said Caleb Stewart, who witnessed Baker’s speech and the jeers from the crowd. “I would have liked to have heard the governor speak more on the subject and I think that he was expecting to do so and they drowned him out in a very rude way. I think he is willing to listen and I think their approach really is more alienating than positive.”

“The reason I invited Governor Baker to speak at Boston Spirit’s Executive Networking Night was not to slight our brothers and sisters in the transgender community but to wholeheartedly support them … as has always been the case at the magazine,” said David Zimmerman, publisher of Boston Spirit Magazine. “For months many in the LGBT community have been asking the Governor to step forward and comment on the public accommodations bill. I, and everyone at Boston Spirit, agree that the Governor and everyone in the state [Legislature]… should step forward and comment. To that end, I asked the Governor to attend our event tonight, stand in front of the community, and be heard.”

Zimmerman noted that, while the magazine typically avoids political issues, he and the publication’s staff felt that inviting Baker to speak at the event was an opportunity to, “… advance the conversation around the bill and increase support for its passage.”

“As I said before, we certainly support non-discrimination in Massachusetts for anybody,” Governor Baker reportedly told WBUR in March. “But the details on this are important, and I know the Legislature’s working on it, and we’ll look forward on seeing what they will produce.”

According to Carly Burton, campaign manager for Freedom Massachusetts, a coalition of national and local LGBTQ advocacy organizations leading the effort to pass the bill, more than 250 businesses, 16 women’s and advocacy groups, and every professional sports team in New England have voiced support for the legislation. Massachusetts Attorney General Maura Healey has also played an active role in lobbying for the bill’s passage.

Currently, the public accommodations bill is stalled in the Legislature and supporters for the bill are trying to sure up a veto-proof vote before the House votes on the bill and sends it to the Senate. If the Senate votes in favor of the bill, it will move to the Governor’s desk. If Governor Baker vetoes the bill, it will then go back to the state Legislature, which can then override the veto, but only if two-thirds of the legislators in both the House and Senate vote in favor of doing so (27 state senators and 107 state representatives).

The controversy surrounding the public accommodations bill in Massachusetts is part of a larger national debate on the rights of transgender people as several states are debating similar bills. In March, North Carolina Governor Pat McCrory made national headlines after he signed House Bill 2 into law, a measure mandating people use the restrooms corresponding to their “biological sex” and prohibiting cities and towns from passing nondiscrimination ordinances that protect sexual orientation and gender identity. The move invited a national outcry from the LGBT community and its allies with several celebrities and big businesses boycotting North Carolina unless the law was repealed. The pressure became so intense that, just this week, Governor McCrory signed an executive order to mitigate the harsh language of HB2 and provide some protections for transgender people, though the bill’s original language still stands.

If the bill is passed in Massachusetts before the end of the legislative session, Massachusetts would become the 18th state to have an explicit law protecting gender identity in public spaces.

To see more photos of the action, click here.

@CharlieBakerMA shame on you for your lack of leadership last night and for cowardly making your quick exit out the back door. #TransBillMA

We don't care about hearing 100 year old switches. We want to hear about #TransbillMA #SignthebillBaker pic.twitter.com/M6KgAHp8Lg