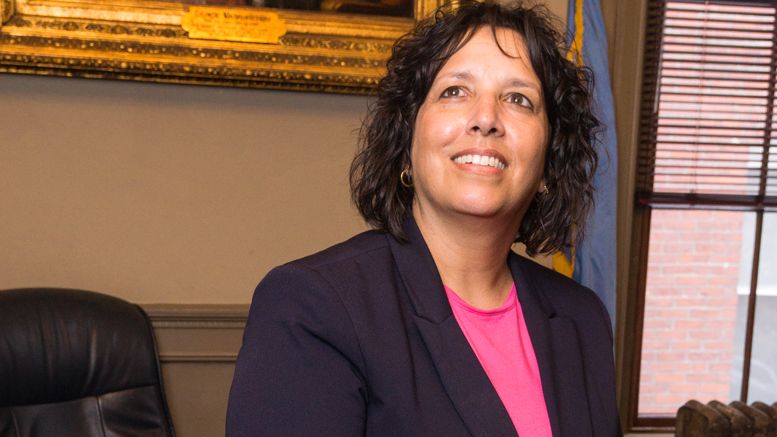 SALEM, Mass.—The North Shore Alliance of Gay, Lesbian, Bisexual, and Transgender Youth (nAGLY)), an organization dedicated to creating, sustaining and advocating for programs, policies, and services for the lesbian/gay/bisexual/transgender youth community throughout the North Shore, will be holding a gala fundraiser on Saturday, June 27, 2015 at Colonial Hall in Salem from 7:00 p.m. to 10 p.m. nAGLY will be honoring its friend and long-time ally, Salem Mayor Kim Driscoll, in a ceremony to take place during the event, which will also feature remarks from Massachusetts State Senate President Stanley Rosenberg.

“Mayor Driscoll quite literally put her money where her mouth is when it comes to defending the LGBT youth community on the North Shore,” stated nAGLY Interim Executive Director Steve Harrington, referring to an incident that received national attention last year in which the Mayor ended an agreement with Gordon College over its anti-gay policies, and then declared she would donate $5 to nAGLY for every phone call she received disagreeing with her decision. “It is bold leadership like Mayor Driscoll’s that is going to make the world safer and more accepting for the youth who are part of the nAGLY community.  We can’t thank her enough, and we are thrilled to have the opportunity to honor her in this way.”

Not only is Mayor Driscoll fierce about LGBTQ rights, but she is also dedicated to justice.

“Mayor Driscoll is one of the most humble leaders I know, whose actions inspired others to follow her lead,” stated Kirsten Freni, Chair of the nAGLY Board of Directors. “Mayor Driscoll doesn’t see black or white, male or female, straight or gay, cisgender or transgender—she stands for what is right no matter what. By signing the nondiscrimination ordinance last year, Mayor Driscoll stated definitively that the youth we serve at nAGLY matter; regardless of how they identify or express themselves when walking the streets of Salem, their Mayor has their backs. We are forever grateful to her for public support of our mission and goals, as it has provided us opportunities for growth, expansion, and additional awareness of issues important to our youth.”

“I am honored to be recognized by nAGLY and to be able to have a role in this worthwhile fundraising effort,” said Mayor Driscoll. “The work that nAGLY does on behalf of the youth of our region is a testament to the values of our entire community: values of inclusiveness, celebration, and support. It’s part of what makes Salem such a special and unique place, not just in Massachusetts, but nationwide. I am so pleased that the organization has found a new home right in the heart of downtown Salem and I look forward to being part of what promises to be a wonderful evening on June 27th.”

The gala event will also celebrate nAGLY’s move into a new, permanent space in the Museum Place Mall in Salem, thanks to a generous multi-year grant from a Massachusetts company, inspired by Mayor Driscoll’s actions, to help the organization establish strong roots on the North Shore and expand its mission. Previous to its move to Museum Place this year, nAGLY meetings were held in the basement of a local church.  The new nAGLY space features a youth lounge, library, and kitchen, as well as a meeting room, and offices, thereby allowing nAGLY to vastly increase its services and capacity.

The June 27th fundraising event, which will feature cocktails, hors d’oeuvres and entertainment from vocalist Chelsea Berry, will help support the purchase of furniture for the new space as well as provide the sustained funding necessary to continue and expand nAGLY’s services.

Tickets are currently available through the nAGLY website at www.nagly.org.

About The North Shore Alliance of Gay, Lesbian, Bisexual, and Transgender Youth (nAGLY)

Founded in 1992, nAGLY’s mission is to create, sustain and advocate for programs, policies, and services for the LGBT youth community, including the establishment of regular support meetings, provide a safe, confidential, and respectful place for youth to feel comfortable and accepted, and to defend and enhance the human and civil rights of lesbian, gay, bisexual and transgender youth on the North Shore of Massachusetts.