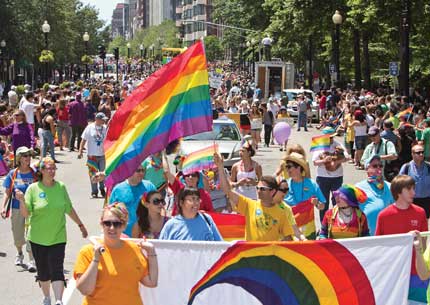 BOSTON, Mass. — May marks the beginning of pride season in New England, and celebrations across the region have evolved into more than just a party. From Boston to Portland, North Shore and Northampton, the LGBT community will be celebrating triumphs, advocating for change and raising awareness about current issues.

Boston Pride is celebrating its 43rd annual parade this year, themed “Moving Forward, Proud, Strong, United.” The Boston Pride Parade and Festival began as public events to celebrate the LGBT community, according to Boston Pride President Linda DeMarco. “Now it has evolved to incorporate the entire diverse community of Boston and supports and advances the issues of equality that the LGBT community cares about,” DeMarco explained.

DeMarco expects a large turnout this year for all events, and reported that attendance was estimated at about 750,000 last year. The events will extend beyond entertainment and parties to include important educational opportunities for participants.

“The Human Rights and Education Committee will hold a public event during Pride Week to delve into the issue of LGBT people in sports, and we are expecting a great response,” DeMarco said.

North Shore Pride has also worked tirelessly to ensure that its celebrations do not rely on a party atmosphere to attract participants and supporters, explained President Hope Watt-Bucci.

“While the event is a celebration, North Shore Pride ensures that it is inclusive of all members of our community,” Watt-Bucci said. “With that inclusiveness comes access for members of our community to educational and networking opportunities for services and information. Last year we had over 40 vendors, the majority of whom provided education and networking to the community.”

This year is North Shore’s second pride celebration, and it has grown tremendously since last year, according to Watt-Bucci.

“Through our efforts we have been able to continue our mission of education and advocacy,” she said. “We have met with most of the North Shore GSAs and are sponsoring a pre-pride dance for them this year. We are very excited about joining with our youth to ensure that we provide a safe and progressive event.”

“Having a Pride event for our local community had always been an interest of mine, but the occurrences of hate in my own neighborhood was the impetus I needed to form an organization that could provide education and advocacy for LGBT persons in the North Shore community,” she explained. “My goal for this organization is true unity in our community.”

In Maine, the Portland Dyke March was established in 2005 in response to a lost sense of community among queer women.

“We felt invisible and overlooked, like we didn’t have a place, or an event, to call our own,” explained Sarah Holmes, one of the Portland Dyke March organizers. “We struggled to find connections to other lesbians and dykes and queer women in the community after Sisters, Portland’s only lesbian bar, closed.”

Holmes also lamented that they felt the Maine Pride organizing was not inclusive of their community. “So, we created the Portland Dyke March as a way to highlight our visibility, create ways for people to get involved and to start rebuilding community,” she explained. “Our mission statement says that we are creating an empowering movement that fosters community and celebration for dykes and the people who love them. This is what we continue to bring to Pride in Maine.”

The Portland Dyke March continues to march in Southern Maine Pride, but also hosts its own stand-alone events that continue to grow.

“In 2006, we held our first stand-alone event the Friday night before the Pride Parade and Festival. We had 150 people show up that first year,” Holmes said. “In 2012, we estimate that close to 600 people were a part of our events, from the pre-show and rally to the actual march and after-party.”

While the Dyke March movement focuses on community and solidarity for queer women, Portland Dyke March organizer Erica Rand believes that prides all over the country should focus more on political issues.

“While the increased participation of allies and young people is heartening, it would be great to have more attention to political issues that we face,” Rand stated. “And not just issues narrowly defined as LGBT interests but also interconnected problems like racism, sexism, economic inequity, ableism, gender policing, war-mongering, inadequate health care and other obstacles to social justice for all.”

Paul Sanders, a regional director for InterPride, the International Association of Pride Organizers, agrees that a greater focus on social and political issues would benefit the pride celebrations in New England.

“I would like to see more displays at our local prides that show the plight of our queer brethren around the world, in hostile locations where even saying who you are carries potential death,” Sanders said. “We have much to celebrate locally, but we cannot truly celebrate until every one of us has the same freedoms.”

InterPride was established in 1982 in Boston to help unite the various organizations that put on pride events through guidance, education, networking and various other member benefits, explained Sanders. Sanders is one of the Regional Directors for Region 6, which includes Connecticut, Delaware, Maine, Maryland, Massachusetts, New Hampshire, New Jersey, New York, Pennsylvania, Rhode Island, Vermont and Washington DC. [pullquote]“Boston Pride Parade has grown from a small protest march to one of Boston’s biggest annual events,” DeMarco stated. “It’s a parade where the individual is celebrated and this year, in particular, we expect it will be a moment where all members of the community, regardless of orientation, will show their Boston Pride.”[/pullquote]

Because InterPride was started in New England, this region plays a large part in the history of the organization, and its future.

Sanders noted that InterPride is also evolving as the needs of local pride organizations evolve. “When we first started it was truly just about putting on a pride event,” he explained. “Now we have Human Rights Committees and Solidarity Funds to help prides in hostile environments.”

Sanders agreed that there has been a slow but visible evolution in prides throughout the region. “I think there is a party atmosphere in many places, but there is a movement to illustrate the balance of needs in the LGBT community, from marriage equality, immigration, workers’ rights and transgender rights.”

Pride events in New England, whether focused on the party atmosphere or the burgeoning issues facing the LGBT community, are all a celebration of heritage, change and acceptance.

“Boston Pride Parade has grown from a small protest march to one of Boston’s biggest annual events,” DeMarco stated. “It’s a parade where the individual is celebrated and this year, in particular, we expect it will be a moment where all members of the community, regardless of orientation, will show their Boston Pride.”

Watt-Bucci recalled a comment from a North Shore Pride participant regarding the importance of Pride events. “He told me he was straight, but tired of all the hate and wanted to show his support for the LGBT community,” she described. “That’s what lets me know that we are providing a service for our entire community and we will continue for as long as there is a need.”

Sanders believes that Prides should aim to touch someone, help someone. “If a pride event makes even one person feel freer or helps open someone’s heart or mind, then we have done our job.”

Rand recognizes pride as significant for many people, for many reasons. “Pride events are ways to come together, meet people, and share public space,” she said. “It’s important that many queer people still face bigotry, shaming and violence that compromise and threaten our lives. Joy, celebration, hope and vision matter all the more.”

This reporter, via The Rainbow Times, contacted a Noho Pride spokesperson several times with specific questions, but specific answers were not received by the time of publication.

To learn more about Interpride, Boston Pride, North Shore Pride and the Portland Dyke March, visit their respective websites at: www.interpride.org, www.bostonpride.org, www.northshorepride.org and www.mainedykemarch.com. Click here to view more photos of prior Pride events covered by The Rainbow Times through the years.