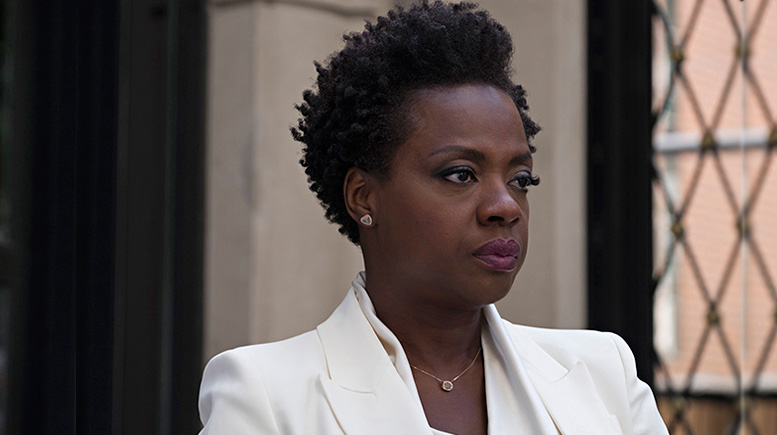 ‘Widows’ star on her LGBTQ evolution, how watching “I Am Jazz” transformed her, why her favorite role was as a man and being inspired by sexual fluidity

Viola Davis taps my hand when she really means what she says. Each time the actress reaches over to make contact, the big bar in the big skyscraper in big Chicago where we are sitting diminishes. She has a way of making any space feel intimate.

The first black actor to win an Oscar, Emmy and a Tony for acting, Davis is seated diagonally from me at a larger-than-we-need table more suited for a family’s Thanksgiving gathering than a conversation between two people. She is striking in a baby-blue pantsuit and a gorgeous, billowing afro, owning the space she occupies much like the way she owns the screen, having granted vulnerability and humanity to some of TV, theater and film’s most unforgettable women for three decades.

Her knack for investigating the deepest human depths of her characters is best illustrated in a single scene, as a loving, anguished mother in 2008’s Doubt, her indelible breakthrough. Later, she starred as Aibileen Clark in The Help (she previously played another maid in gay director Todd Haynes’ 2002 film Far From Heaven), and in Suicide Squad and Fences, which won her an Oscar. And as criminal defense attorney Annalise Keating on ABC’s hit drama How to Get Away with Murder, she is a mighty force.

After spending the early years of her career not recognizing her power even though we did, Davis, 53, does now, she tells me. The obvious question: “Do gay men feel compelled to bow down to you?” I ask, moments into the candid conversation that awaits us, which has Davis reflecting on how she learned to love the LGBTQ community and why she feels her best role was as a man. Smiling, she lights up and leans back. “You know what, yeah, they do.”

Chris Azzopardi: These badass women doing badass things in a world where sometimes these women are told that they can’t do them…

Q: How do you explain the connection between these strong women you play and the LGBTQ community?

Q: Did you have something to do with Annalise’s sexual fluidity, then?

I had everything to do with that. And so did (creator) Pete Nowak; I can’t leave him out. I really have to give him credit for that too. But yeah, absolutely. And also, I Am Jazz: I was watching that one night. I love that show. But I was watching that one night and (trans TV star and model Jazz Jennings) was playing in the closet with one of her friends who was a trans teenager, and it was just great. They were talking about who they see themselves within the future, and they were like, “Whoever, you know. I’m open. I’m open to a boy, I’m open to a girl.” And they started talking about just the attributes of the people they wanted to be with.

That transformed me more than anything. I thought, “That is the greatest thing in the world,” and I thought that that was a great idea for Annalise because Annalise is so damaged, so traumatized that what if she just said, “I’m just open to love”? God, think about what we can explore there.

Q: Are you inspired by this generation of young people who identify as sexually fluid?

A: Totally, with everything. My generation–I always say, “The black and Hispanic people liked disco and the white people liked rock ’n’ roll.” That was my generation. And there was no language for homosexuality–only fear.

Q: Growing up in Rhode Island, what was your introduction to the LGBTQ community?

A: Hmm… probably through… that’s a difficult question. I’m gonna say this: My friend… $hit. This is menopause, ’cause I was just talking about him. Slim! My friend Slim! And I’ll say him, even though it’s more than just him because I just did have a lot of gay friends. I’m a theater geek!

I just remember going with it, of course, because I loved him. It was my first introduction into a different level of sexuality that no one talked about. He had a group of young men that lived with him who were all trans and he called them his “sons and daughters.” Some were gay, some were trans, some were transvestite, and it was my first introduction into the fluidity of sexuality.

Q: You said this was going to be a difficult question for you to answer, but it wasn’t.

A: It wasn’t difficult, I know. I guess not.

Q: Was reconciling your Christian upbringing with your acceptance of homosexuality a challenge for you?

A: I guess it was a little–it was. But I loved him. I have to say I loved him, so I felt it was on me to shift my thinking and it was up to me to understand him. I will say I went with it, but it was my first introduction to understanding it. When I was on Facebook, I did have my Facebook friend Nika (Lomazzo, a trans woman and activist) and she really schooled me. So every day I would go to her site and she would school me and I said, “I’ve been to school; I’m just gonna learn.” She’s a trans woman, so I was schooled (with) just certain language.

Q: The first time you kiss a same-sex love interest played by Famke Janssen – did your mother ever see that episode of How to Get Away with Murder even though you didn’t want her to?

Q: You said that you weren’t gonna show it to her.

Q: You starred in one of the most notable queer films ever made: Todd Haynes’ Far From Heaven. How do you reflect on your role in that film?

A: I mean, the role was a maid. I’m done with the maids. But that was in the beginning of my career. I wasn’t really awoke then–not as awoken as I am.

Q: You recently admitted to having issues with The Help.

Q: Looking back on The Help and Far From Heaven, what has that taught you about the importance of representation for the black and LGBTQ community?

A: I guess I already knew it then, too, but I never thought that I had any power. I was just happy to have a job. But I think it’s important to be seen, it’s important to see your own images on the screen–and in a way that is honest.

The reason I became an actor, and it’s absolutely the reason why I became an actor: I’m a total nerd and I fell in love with Arthur Miller. He said he wrote to make people feel less alone, and that’s why I do what I do. Seriously, that’s why I do what I do. I seriously do. And so I feel responsible for any image I put out there that makes people feel alone, that makes people feel not seen, that doesn’t show fully who they are–their anger, their pain, their joy, their sexuality. That’s your job as an artist, so yeah, that’s where I’m at right now.

Q: Have you considered the importance of you not just portraying a lesbian but a lesbian of color, a demographic so rarely portrayed on screen, and the impact that could have on the LGBTQ community?

A: I’ve been offered, I played: God’s Heart with Julie Kavner. We were lesbians. I played a lesbian in King Lear. It was a workshop production (at the Public Theater in New York) and actually the guy who directed it was one of the people who put together Paris Is Burning and he set King Lear in one of the gay (ball-culture) “houses” of the ’90s. And I didn’t do it, because the director told me at the last minute I probably should’ve done it, but he wanted me to compete in those gay house shows. You have to be a man pretending to be a woman or a woman pretending to be a man and the more real you are, that’s a whole competition. It’s about being as real as you can be. To me, that was the best role I’d ever done, by the way. Bar none. TV, film. It was the best role.

Q: Why was your role in King Lear so special to you?

A: Because I had to play a lesbian who was pretending to be a man and I went home–I am telling you, I said, “I am gonna hit this” (bangs fist against palm). So I felt like I really transformed into a man. I thought it was totally believable! And Nicole Ari Parker was my girlfriend! Every time we see each other, I’m like, (excitedly waves her arms) “Hey!”

Q: I feel like gay men must come up to you all the time and quote Annalise’s iconic line, “Why is your penis on a dead girl’s phone?” Is that line still following you around?

A: I mean, I don’t know what it is about that line–maybe just ’cause it was so unexpected! So I keep quoting or thinking about Dorothy in The Wizard of Oz because I feel like gay men like that movie too. I love that movie. And there’s a lot of reasons why. I think it’s Judy Garland too, you know?

A: Yeah. You understand why. But also, this is my thing: She keeps talking about going home and wanting to go home, and then, in the end, the Good Witch tells her (she) had the power to go home all along. I know, even as a black woman, that feeling. I have the power within to be the change I wanna see, to have the life I wanna have; it’s already in me.

People strip us of our worth and the potency of our worth and the potency of our power so much. I see it because … listen, I’m socialized on steroids (laughs). The number of people I meet every day who interview me, who I have to meet at parties and social gatherings, because I’m an actor–one of the things I’ve noticed, ’cause I love looking at different reporters who come in and imagining who they are, who they love, and I love it. And there have been (people) who come in from the LGBTQ community–and now there’s more trans men, trans women reporters, and it’s a “coming out” and stepping into who you are. You gotta love it.