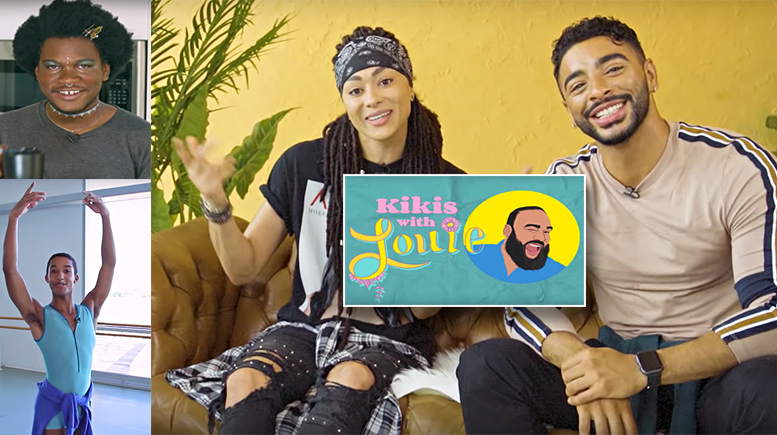 In response to staggering rates of LGBTQ bullying and suicide ideation, Advocates for Youth’s new series creates a safe and affirming space where LGBTQ young people can learn and grow

WASHINGTON—Launching ahead of the 30th Anniversary of World AIDS Day, Kikis with Louie is a collaboration between Advocates For Youth and the MAC Aids Fund, and aims to normalize stigmatized conversations about HIV, STIs, healthy relationships, and more. Hosted by Louie Ortiz-Fonseca, Director of LGBTQ Health and Rights at Advocates for Youth, the first episode features the star of FX’s POSE, MJ Rodriguez, discussing the trans-erasure at the height of the AIDS crisis and the need for sex ed to be LGBTQ-inclusive.

At a time when the Trump Administration is threatening to rollback the rights of LGBTQ individuals and an alarming 47.7% of gay, lesbian, and bisexual students report that they seriously considered attempting suicide, the series profiles youth activists from across the country who are fighting back against attacks on their sexual and reproductive health and rights.

“Unfortunately, we know many LGBTQ young people, especially youth of color, are left in the dark when they ask questions about sex, relationships, and growing up,” said series host Louie Ortiz-Fonseca. “The goal of the series is to equip LGBTQ young people with information, and make sure they know that they are deserving of safe, happy, and healthy lives.”

Episodes feature honest conversations with LGBTQ youth and the celebrities, athletes, artists, and activists they admire most. The series spans six-cities and features musician Shamir discussing his bipolar diagnosis, Reggie Bullock of the Detroit Pistons opening up about the murder of his trans sister, and YouTuber Brendan Jordan going in-depth about coming out as genderfluid, among other wide-ranging interviews.

“As someone who grew up Black and Queer in rural Texas, I know first-hand that when you’re feeling isolated, witnessing a person who shares your lived experiences thriving can feel like necessary oxygen,” said Lincoln Mondy, series director and Senior Manager of Strategic Projects at Advocates for Youth. “That’s why we created Kikis with Louie, so that LGBTQ youth across the country can see people who look like them doing the necessary work to unpack stigma, identity, mental health, and other topics that we’re often told to bury.”

The first episode of Kikis with Louie coincides with the launch of ECHO—Engaging Communities around HIV Organizing—a first-of-its-kind council of youth activists living with HIV who are actively mobilizing online and in their communities to combat HIV stigma.

“Open and inclusive conversations about sexual health and healthy relationships are more important than ever; they will not only change attitudes, they’ll save lives,” said Nancy Mahon, Global Executive Director of the MAC AIDS Fund. “The MAC AIDS Fund is thrilled to be part of this project with Advocates for Youth, which shines a light on important issues for young folks around the country and encourages vulnerable conversations to happen.”

The year-long YouTube series will feature new episodes every other Thursday and will include how-to videos on putting on a condom, legally changing your name, and what to do in a police encounter, among other videos from experts. Visit Youtube.com/AdvocatesForYouth to watch the first episode and subscribe to the series.