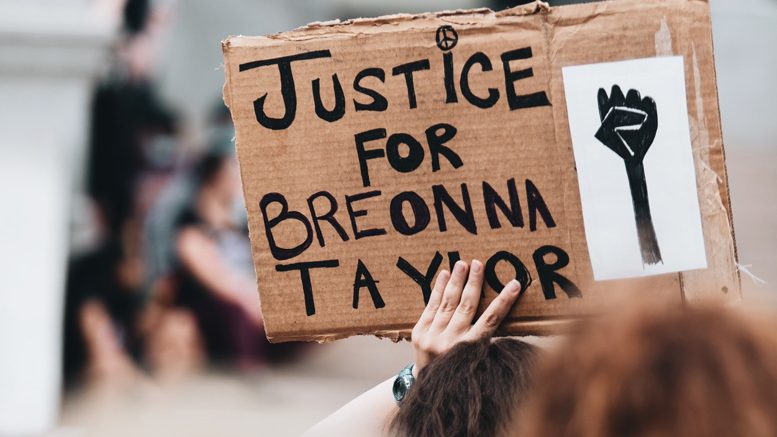 Three police officers involved in the slaughter of Breonna Taylor were not charged with murder, as the grand jury indictments were announced this afternoon. The police did not even enter the apartment they intended to enter—a fatal mistake for Taylor—but that didn’t matter for this white-centered system rooted in racism.

Officer Brett Hankinson was indicted for “three counts of first-degree wanton endangerment” as it relates to Taylor’s neighbors, but not based on the fatal shooting itself. According to the USA Today, “A wanton endangerment charge is a class D felony and carries a penalty of one to five years in prison. The charges read by Judge Annie O’Connell on Wednesday said that Hankison “wantonly shot a gun” into three apartments.” The two other officers involved in the shooting, Sgt. Jonathan Mattingly and Detective Myles Cosgrove, were not indicted, USA Today reported.

During a no-knock warrant, police killed Taylor as she slept in her Louisville, Ky. apartment on March 13.

At a time where protests have erupted across the country as a result of police brutality, especially against Black Americans, this grand jury decision draws a final blow to Black Americans and communities of color. Justice has not been served many argue, and I argue the same.

The police killing of an innocent civilian as she peacefully slept—she wasn’t a suspect of any murder, but rather a good law-abiding citizen of this country—is unconscionable. What’s worse is that these officers will not be held accountable for such a shooting—that is the ultimate betrayal of the justice system. Justice is not blind at all. Justice has a color in this country. Justice favors white people, it is what I see and the privilege I’ve experienced as a white person too.

There is no justice in this case, again, just like there hasn’t been in the countless cases involving police misconduct around the country for centuries. The entire system needs to be overhauled and rebuilt from the ground up, for there to be justice for all. A system that is rooted in white supremacy, formed to “catch” runaway slaves, should not continue to exist as is, without it being dismantled and rebuilt so all of our residents and citizens are treated equally by law enforcement and under the law—a tall order we’ve yet been able to accomplish.

For the “wanton endangerment” indictment, Taylor was not considered as one of the victims of such an indictment, just her neighbors. In fact, during an ABC News press conference, it was revealed that Taylor was not even brought up.

Breonna Taylor, a young woman with a bright future and promise ahead of her, was gunned down by police and was delivered yet another fatal blow today. Her murder is another one to add to the list of countless murders of Black and other people of color by the system that protects only some. There are expected to be massive protests throughout the nation tonight as we grieve for yet another Black life lost without consequence.

The judge set a $15,000 cash bond for Hankison. That was the price of Breonna’s life in today’s America, in 21st Century America, under Trump’s and his cronies America.