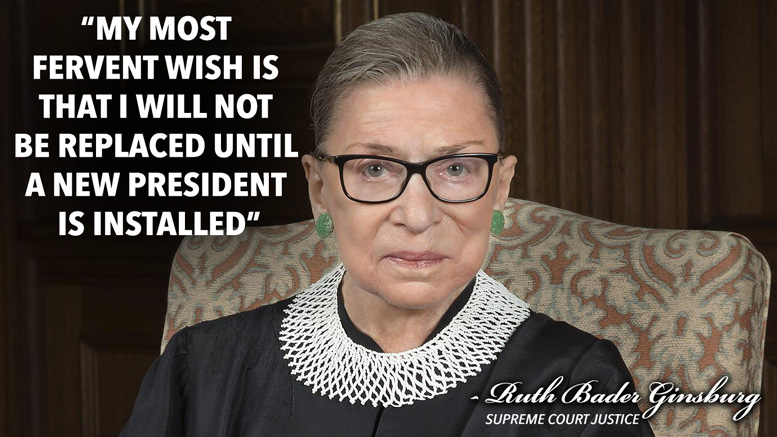 “My most fervent wish is that I will not be replaced until a new president is installed,” the late Supreme Court Justice Ruth Bader Ginsburg dictated to her granddaughter in a press statement days before her passing.

In a callous move, Senate Republican Majority Leader Mitch McConnell announced that he would call for a vote to replace the notorious RBG just an hour after the nation learned of her death. Since then, he has already signaled to Trump that the GOP will likely the move forward with a potential successor, one of the most conservative women known to sit on the bench, Judge Amy Coney Barrett.

“Senator McConnell … has indicated to him [Trump] that he and GOP senators know Barrett well, suggesting that her nomination might move quicker because they know her record, according to a source familiar with the matter,” CNN reported.

A former clerk to the unapologetically Conservative Supreme Court Justice Antonin Scalia, who once compared same-sex marriage to eventual bestiality, “Barrett was Trump’s pick for a seat on the 7th U.S. Circuit Court of Appeals,” the report read.

According to Senate Minority Leader Chuck Schumer, Barrett “stands for all the things Ruth Bader Ginsburg was against and so many things that the vast majority of American people are against,” striking an opposite stance on nearly every issue from women’s rights, to reproductive choice, to LGBTQ equality, to the Affordable Care Act and most issues of importance relating to marginalized communities.

In 2016, Senate Republicans “refused to confirm Obama-nominee Merrick Garland, citing the proximity of the election,” as the reasoning for the blockage, reported the Daily Beast.

Within hours of Justice Scalia’s passing, McConnell amped up for an apparent power grab and issued a statement, refusing to allow then-President Obama to exercise his right as president to replace the late Justice at the time … with the election being 9 months away.

“ … The Senate should not confirm a replacement for Supreme Court Justice Antonin Scalia until after the 2016 election—an historic rebuke of President Obama’s authority and an extraordinary challenge to the practice of considering each nominee on his or her individual merits, Politico reported. “The American people should have a voice in the selection of their next Supreme Court Justice. Therefore, this vacancy should not be filled until we have a new president, McConnell said, at a time when other elected officials, from Sen. Bernie Sanders to future Senate Democratic Leader Charles Schumer, were releasing statements offering condolences to the justice’s family …”

Nearly all Republicans in the Senate fell in line with McConnell, effectively blocking Pres. Obama’s right to nominate a Supreme Court Justice, setting the first precedent of its kind and subsequent fallout 4 years later.

According to McConnell and Senate Republicans, if Obama’s nominee were to be confirmed to the Supreme Court, it would “be the first confirmation vote since Anthony Kennedy to be held this close to an election,” which “made it necessary to leave the appointment to the next elected president,” Politico wrote.

That was the first time a Senate leader asserted and unilaterally blocked a presidential right to appoint a Supreme Court Justice. Therefore, even 9 months away from the election, President Obama’s nomination was stripped from him and Trump was left to choose Obama’s rightful Supreme Court Justice when he assumed office.

With a confirmed nominee, millions of everyday Republicans and Democrats will likely loose their health insurance, afforded to them under the Affordable Care Act (ACA), despite the loss of 200,000 lives and while in the middle of a pandemic that the country is still battling due to Trump’s failed leadership and “downplaying” of the pandemic, as Trump told Robert Woodward in a series of 18 interviews that culminated in the acclaimed journalist’s new book on Trump, “Rage”.

If the GOP gets away with confirmation of a new Justice, more than 20 million Americans will immediately lose health insurance and its clause, which stipulates that pre-existing conditions (which COVID is now listed as one) must be covered. SCOTUS is expected to begin hearing arguments for the full repeal of the ACA on November 10. With the Court already leaning Conservative, Trump’s nominee would seal the fate of ACA, CNN reported.

If allowed to proceed, the Trump nominee would place the Court at an extreme Far-Right Conservative advantage for decades and generations to come, threatening not only healthcare, but the civil rights women, Roe v. Wade, People of Color rights and protections, voting rights, LGBTQ+ rights and more.

In a hotly contested Senate race in South Carolina, sitting Senator Lindsey Graham who fell in line with McConnell in 2016, has flipped-flopped again and apparently no longer believes the American people should have a voice, despite the fact that millions of Americans have already cast—and are currently casting—their ballots for the 2020 elections.

“I want you to use my words against me,” Graham said in 2016, reported the Daily Beast. “If there’s a Republican president in 2016 and a vacancy occurs in the last year of the first term, you can say Lindsey Graham said let’s let the next president, whoever it might be, make that nomination.”

Graham reiterated it several times, including in 2018.

“If an opening comes in the last year of President Trump’s term, and the primary process has started, we’ll wait to the next election,” as reported by the Daily Beast.

However, in the moment of truth, just the day after Justice Ginsburg passed, in Trumpian-style, Graham tweeted his current position.

In light of these two events, I will support President @realDonaldTrump in any effort to move forward regarding the recent vacancy created by the passing of Justice Ginsburg.

“I will support President @realDonaldTrump in any effort to move forward regarding the recent vacancy created by the passing of Justice Ginsburg.”

Graham, who is in a tight race with Jamie Harrison in a battle for South Carolina’s senate seat, and his failure to keep his word, has drawn sharp criticism from South Carolinians, including his challenger.

Over the weekend Harrison tweeted, “My grandpa always said that a man is only as good as his word. Senator Graham, you have proven your word is worthless.”

Also in tight races in their respective states, Sen. Susan Collins (R-Maine) and Sen. Lisa Murkowski (R-Ala.) have voiced strong opposition to voting on a nominee prior to the election and are the only Republicans to date that have stuck by their conscience and word given in 2016.

Senate Republicans have often applied different rules that suit their power plays to dismantle the U.S. democracy and chips away at the principles established by the creators of the Constitution.

“For weeks, I have stated that I would not support taking up a potential Supreme Court vacancy this close to the election,” said Murkowski in a statement on Justice Ginsburg’s passing. “Sadly, what was then a hypothetical is now our reality, but my position has not changed.

“I did not support taking up a nomination eight months before the 2016 election to fill the vacancy created by the passing of Justice Scalia. We are now even closer to the 2020 election—less than two months out—and I believe the same standard must apply.”

Likewise, Collins took it a step further by saying Justice Ginsburg’s replacement should be nominated by the next president.

“Given the proximity of the presidential election, however, I do not believe that the Senate should vote on the nominee prior to the election,” said the Maine Senator in a statement. “In fairness to the American people, who will either be re-electing the President or selecting a new one, the decision on a lifetime appointment to the Supreme Court should be made by the President who is elected on November 3rd,” said Collins.

The Republican Senate majority only needs 51 votes to “confirm a new justice once one is formally nominated,” according to multiple reports.

If 3 of the 53 Republican votes are lost, Vice-President Mike Pence will cast a tie-breaking vote, making 4 dissenters the magic number to punt the nomination until after the election.

At this time, the lone Republican who hasn’t expressed support or opposition to the nomination yet is former Massachusetts Governor and Mitt Romney (R-Utah).

“Mr. Romney was the only Republican to break with his party and vote to convict and remove Mr. Trump at his impeachment trial,” The New York Times reported. “A vote on a Supreme Court nominee before the election could prove tricky for Mr. Gardner, who is in a tough re-election race in the politically competitive state of Colorado. And Mr. Grassley, a former chairman of the Judiciary Committee, had previously held to Republicans’ 2016 position that a Supreme Court vacancy should not be filled in an election year.”

Democrats Vow to Leave Nothing Off the Table

According to Senate Minority Leader Chuck Schumer (D-NY), “63% of Americans believe that the next president should decide the replacement of Justice Ginsburg,” he cited during a press conference.

According to a report on Politico, McConnell obstructed several of Obama’s judicial appointments—leaving Trump with 280 federal judges to appointment. Having a Republican Senate in control, the effort succeeded. Trump gloated to Woodward about it, calling the appointment of judges and the openings for justices a “golden nugget” placing the right agenda conveniently to change rulings and stall others, based on religious right beliefs and not legal precedents.

According to multiple civil rights and activist organizations working to preserve U.S. democracy, the best way to fight against the described “hypocritical Republican Machine,” is to ensure that everyone’s Senator is contacted to demand that the Supreme Court nomination be held until after the 2020 election.

As matter of fact, Trump agreed in 2016 too. As reported by CNN via audio recording, Trump himself argued in favor to withhold President Obama’s Supreme Court nomination until a new President was instilled—9 months later.

Each Senator’s contact information can be found at https://bit.ly/3cjxSmg.